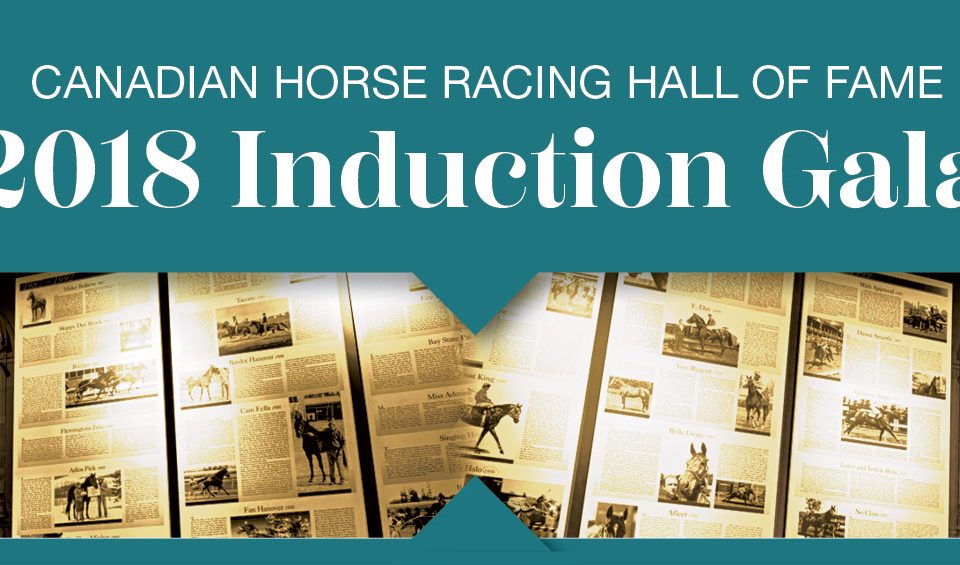 This year’s Hall of Fame inductees highlight Canadian horse racing success stories from across the country and the international racing world.

The Canadian Horse Racing Hall of Fame Class of 2018 includes:

The Gala event will feature a cocktail reception, a fantastic line up of silent and live auction items, and a four course gourmet dinner.

McMahon, a Queen’s Plate and Kentucky Derby winning owner opened up the Northwest Canadian wilderness for oil production and owned the first major thoroughbred racing stable in western Canada. Standardbred horseman Hector Clouthier Sr. was instrumental in forming horsemen’s groups in Ontario, enabling many to make a career in the sport.

Join us Wednesday, August 8th at the Canadian Horse Racing Hall of Fame Induction Gala, as we celebrate the class of 2018 and their spectacular contributions to the sport of horse racing.

Held at the Mississauga Convention Centre, co-hosting duties will be shared by Jim Bannon, CHRHF member and Woodbine Entertainment Group Thoroughbred Racing Analyst along with Greg Blanchard, racing commentator and Raceway Manager at the Raceway at Western Fair.

The reception and silent auction will commence at 5:30 p.m., followed by a four course dinner, live auction and induction ceremonies at 6:30 p.m.  Tickets are $175 per person, or $1,700 for a table sponsorship which includes 8 tickets, a $300.00 donation to the Canadian Horse Racing Hall of Fame and a total of $700 charitable receipts.

We will have an impressive list of live and silent auction items including stallion breedings, sporting event tickets, racing related memorabilia and other surprises. Auction donations are welcomed.  All proceeds from the auction will go toward helping the Hall of Fame recognize the achievements of the best in Canadian horse racing and the history of the sport.

Tickets may be purchased by visiting the Canadian Horse Racing Hall of Fame Online Store at http://shop.horseracinghalloffame.com/ or by contacting Linda Rainey 416-417-9404 or [email protected].