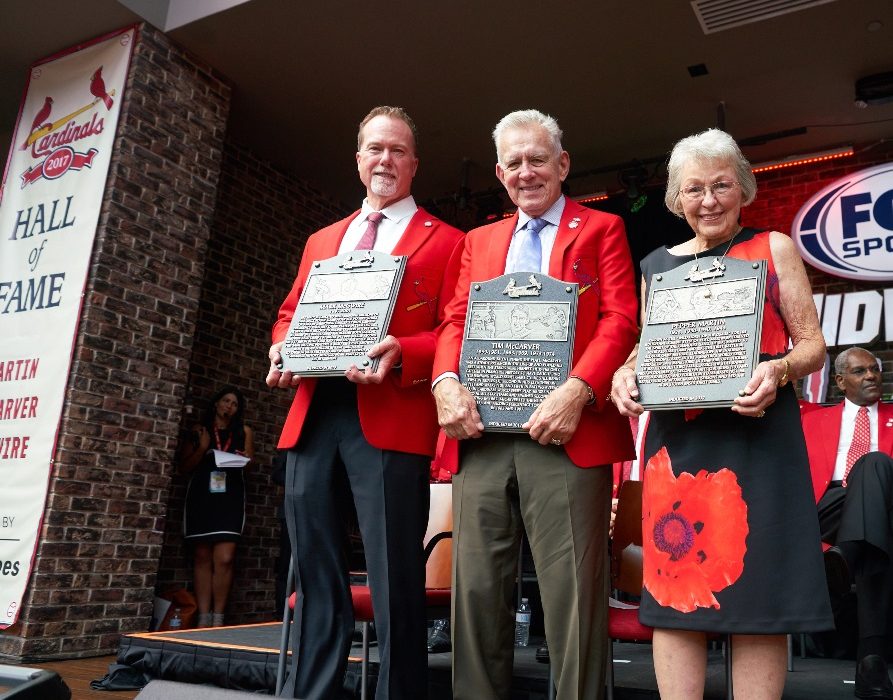 ST. LOUIS — The Cardinals’ storied history was on display again Saturday as three players representing three eras of franchise history joined the membership of the Cardinals Hall of Fame as part of the organization’s fourth induction class.

Mark McGwire and Tim McCarver received their signature red jackets after receiving the most support among the 40,000 votes cast by fans earlier this year. Pepper Martin went in as the veteran player selected by a Red Ribbon Committee. The three joined 34 former players, managers and contributors already enshrined.

McGwire, now the bench coach for the Padres, missed the first two games of San Diego’s series in Miami to be present for Saturday’s ceremony. And though McGwire turned emotional when his introductory video showed highlights of his historic 1998 season, he spent much of his speech detailing his special connection with the city of St. Louis and its baseball fans.

That included the standing ovation he received when he played his first home game at Busch Stadium II after being traded from Oakland to St. Louis midway through the ’97 season.

“I back out of the box and I’m saying, ‘This is crazy,'” McGwire recalled. “The feeling that I had is a feeling I will never, ever forget. That moment, right then, I knew this was the place that I wanted to be.”

“To think that in 1997, a southern California kid had no idea that he was going to spend the greatest 4 1/2 years of his life with you all,” said McGwire, who snapped a few selfies during the ceremony. “I am humbled. I am honored. And I will wear this jacket with so, so much pride.”

McCarver and McGwire shared a connection even before the ceremony, as McCarver was on the broadcast call when McGwire surpassed Roger Maris with his 62nd home run. Now a part of the Cardinals’ broadcast team, McCarver made his Major League debut with the Cardinals as a 17-year-old catcher in 1959.

He began to establish himself as a big leaguer in 1963, one year before he helped the Cardinals capture their first of two World Series championships that decade.

“You would run out of superlatives when you talk about the men who have, with integrity, intelligence and gritty determination, represented those remarkable teams,” McCarver said. “We were good. Like, really good.”

McCarver, a two-time All-Star during his 12 seasons with the Cardinals, still ranks second in hits (23), third in RBIs (11) and fifth in batting average (.311) in franchise World Series play.

Martin, who died in 1965 at the age of 61, was represented by 42 family members, most of whom traveled from Texas and Oklahoma. Speaking on behalf of her family, Jenny Weathersby, one of Martin’s three daughters, said her father “would have played baseball for nothing, just for the privilege of playing the game.”

“He played with great enthusiasm, passion and reckless abandon that caught the eye of managers, teammates, fans and sportswriters,” she said. “Probably nothing better illustrates this than his famous headfirst slide and his nickname Pepper.”

Martin played all 1,189 of his Major League games as a St. Louis Cardinal and was a member of the 1931 and ’34 World Series championship teams. A four-time All-Star, Martin led the National League in stolen bases three seasons and was known as the heart and soul of the iconic Gashouse Gang.

“Daddy was truly a free spirit,” Weathersby said. “Along with his many accomplishments on the field, he was remembered for his antics, his sense of humor and practical jokes, and his contribution to the camaraderie inside the clubhouse as a member of the infamous Gashouse Gang and organizer of the Mississippi Mudcats band.”

Jenifer Langosch has covered the Cardinals for MLB.com since 2012, and previously covered the Pirates from 2007-11. Follow her on Twitter and Facebook. This story was not subject to the approval of Major League Baseball or its clubs.