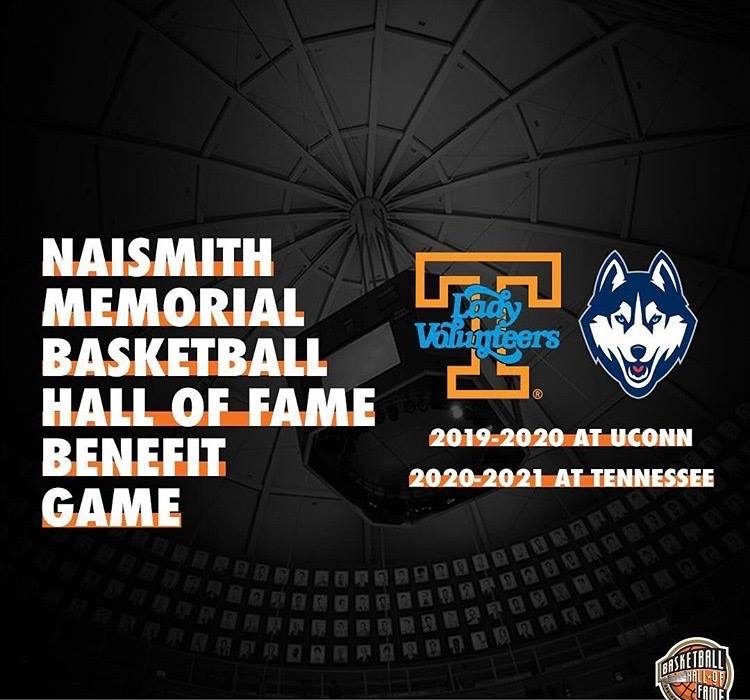 SPRINGFIELD, MA – The Naismith Memorial Basketball Hall of Fame announced today the renewal of the historic series between the UConn Huskies and the Tennessee Lady Vols, starting in the 2019-20 season. As a longstanding rivalry, the teams consistently met from 1995-2007, but have not faced each other since. Widely regarded as the two most successful women’s programs in the country, UConn and Tennessee account for 19 National Championships, dozens of impact players in the WNBA and many of the sport’s all-time greats.

“The Basketball Hall of Fame is proud to celebrate all levels of the game for both men and women,” said John L. Doleva, President and CEO of the Naismith Memorial Basketball Hall of Fame. “When it comes to women’s college hoops, there’s no match-up more highly anticipated than that of UConn versus Tennessee. We’re so proud to unite these teams in a contest benefitting great causes and honoring the late Hall of Famer Pat Summitt.”

“We are so excited to join UConn for games that will generate incredible interest for women’s basketball and benefit the Pat Summitt Foundation, the Naismith Memorial Basketball Hall of Fame and the Women’s Basketball Hall of Fame,” Tennessee Head Coach Holly Warlick said. “Basketball fans will be intrigued to watch these two programs meet on the court again, and I know Lady Vols and Huskies fans will be eager to pack arenas, cheer on their teams and make a difference for some very worthy causes, including one bearing the name of my coach, mentor and friend.”

UConn head Coach Geno Auriemma echoed this by saying, “I am happy to have the Lady Vols back on our schedule and am thrilled that proceeds to our games will benefit such an important endeavor like the Pat Summitt Foundation. I know our fans will be excited to renew the rivalry with Tennessee and expect them to fill the building for some good basketball and a great cause.”

The games will be televised and supported worldwide by the ESPN family of networks.

“It is only fitting that this game returns to ESPN,” said Carol Stiff, ESPN vice president of programming and acquisitions. “’For the Good of the Game’ was Pat Summitt’s famous quote back in 1994 when accepting the challenge to travel to Connecticut in January 1995. The two teams faced each other twice that season, with UConn going undefeated and ultimately defeating the Lady Vols to win their first national championship. In those moments, one of the richest rivalries in women’s basketball was born. We look forward to showcasing this event during the annual We Back Pat week.”

Game dates, ticket information and any ancillary events will be released at a later date.

The Pat Summitt Foundation, a fund of East Tennessee Foundation, was established by Pat and Tyler Summitt in November 2011. Its mission is to award grants to non-profit organizations that advance research for treatment and a cure, provide support for patients and caregivers, and educate the public about Alzheimer’s disease. In 2015, The Pat Summitt Foundation formed a strategic partnership with The University of Tennessee Medical Center to create The Pat Summitt Clinic. The clinic, which opened in January 2017, greatly improves access to healthcare services for families and patients facing Alzheimer’s disease in a facility created to advance Alzheimer’s research, detection, treatment, and family caregiver support. To learn more, please visit www.patsummitt.org, like the foundation on facebook.com/patsummittfoundation, and follow it on Twitter and Instagram @webackpat.

About Women’s Basketball Hall of Fame:

Discover the past, present and future of women’s basketball in Knoxville, Tennessee. The Women’s Basketball Hall of Fame is the world’s only hall of fame dedicated solely to the accomplishments of women’s basketball. To learn more, please visit www.wbhof.com or www.facebook.com/wbhof, and follow on Twitter and Instagram @wbhof.

About the Naismith Memorial Basketball Hall of Fame:

Located in Springfield, Massachusetts, the city where basketball was invented, the Naismith Memorial Basketball Hall of Fame promotes and preserves the game of basketball at every level – professional, collegiate and high school, for both men and women on the global stage.

Visit us on the web: www.hoophall.com