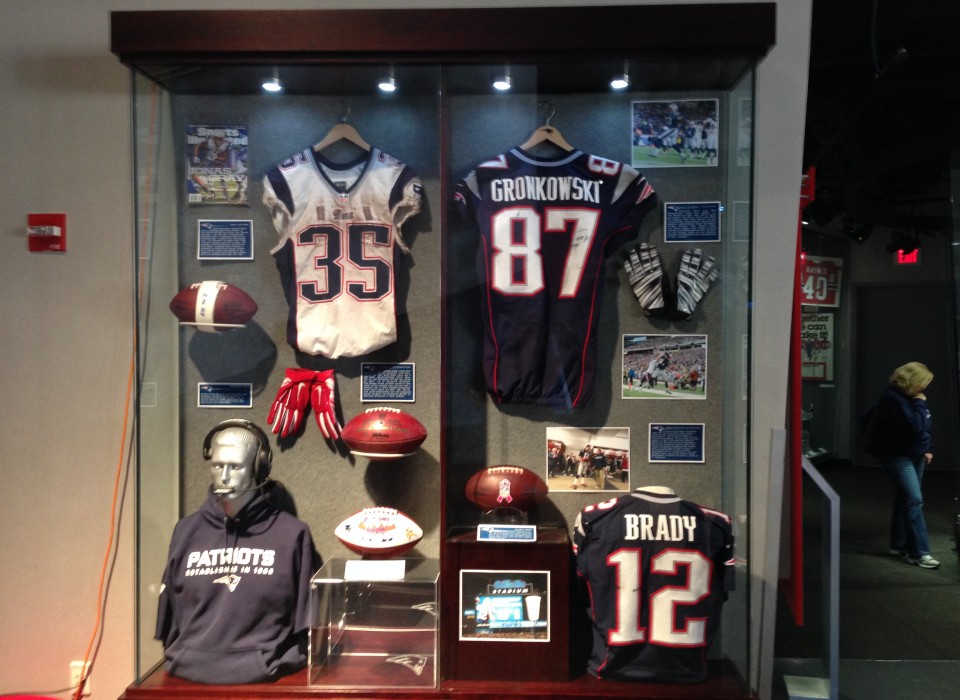 Another exciting season of Patriots football has brought some special moments and milestones along with it, and The Hall continues to chronicle that history and preserve it as it’s being made. Artifacts from the current season are now part of a special display case at The Hall. 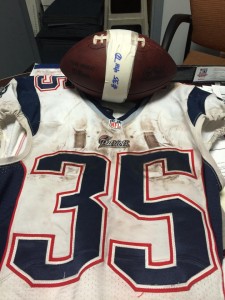 The most recent artifacts added came straight from Indianapolis to The Hall. Jonas Gray rushed for 201 yards and a franchise-record four touchdowns in the Patriots 42-20 win on Nov. 16. His four touchdowns set a single-game rushing record and tied Randy Moss for the most touchdowns in a game. His white away, game-worn jersey and the ball he carried into the end zone for his fourth TD are now at Hall.

Tom Brady continues to dot the NFL and Patriots record books as he plays his15th season in New England. Brady moved past Hall-of-Fame quarterbacks Warren Moon and John Elway for fifth on the all-time NFL passing yardage list this season and also eclipsed the 50,000 passing yards mark. The home navy blue jersey Brady wore to eclipse the 50,000-yard mark in the Oct. 5 game against the Bengals along with the ball he threw are both on display at The Hall. The ball used to pass Elway, which happened in the Nov. 2 game against the Broncos, was sent to the Pro Football Hall of Fame in Canton, Ohio.

Brady wore the same blue jersey two weeks before, on Sept. 21 against the Raiders, when he won his 150th game as a starting quarterback during his team’s 16-9 win at Gillette Stadium. 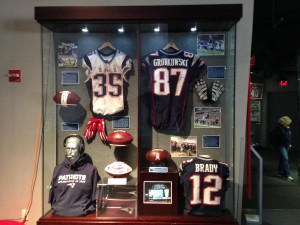 One of Brady’s all-time favorite receiving targets is tight end RobGronkowski, who also continues to assault the team’s and the NFL’s record books. Gronk’s navy blue home jersey and blue gloves worn against the Broncos when he caught his 50thcareer touchdown pass are also part of The Hall’s new display. Gronkowski caught his 50th in just his 59th game and tied Randy Moss as the second fastest receiver to reach that plateau (Lance Alworth did it in 54 games).

Gronk wore the same jersey the week before against the Chicago Bears on Oct. 26 when he teamed with Brady to set a franchise record for touchdown connections between a quarterback and receiver. The tandem entered the game having connected for 45 touchdowns, which tied them with the Drew Bledsoe-to-Ben Coates connection. But Gronkcaught three TD pass from Brady that day to establish the new mark. 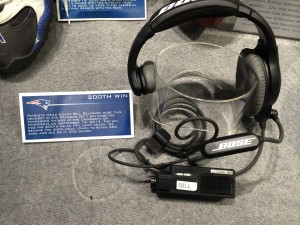 Head coach Bill Belichick, who has 225 total wins, reached the 200 regular season win mark against the Vikings back in September. The Hall has his headset from the game on display along with a painted ball marking the accomplishment.

When the Patriots beat the Jets in October, defensive lineman Chris Jones blocked a 58-yard Nick Folk, game-winning field goal try. The ball that was blocked and Jones’ gloves worn to block it also are part of the display. Jones’ block came a year after his penalty on a missed Folk field goal moved the Jets 5 yards closer and awarded a re-try, on which Folk connected to send the Patriots to defeat.