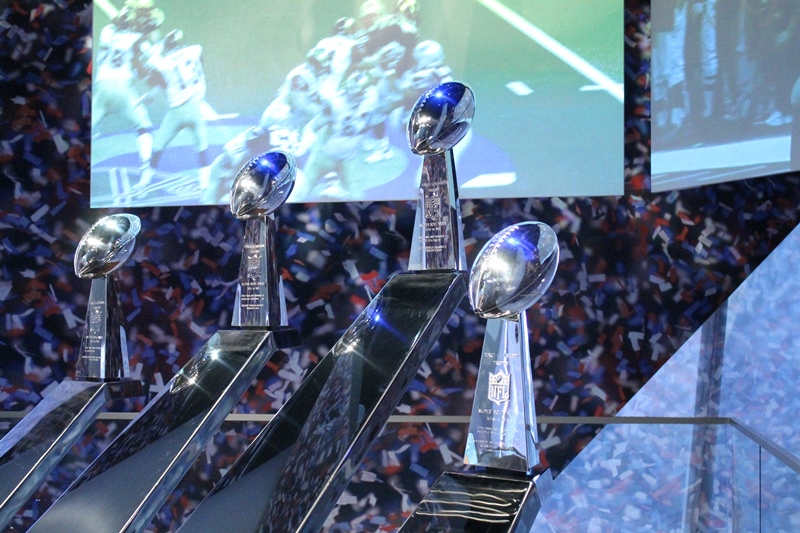 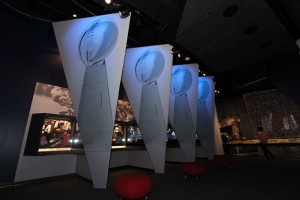 The New England Patriots are living in rarified air reserved for a select few NFL teams. They have earned their status as NFL royalty. They walk on the proverbial red carpet.

Consequently, The Hall at Patriot Place presented by Raytheon underwent an offseason makeover.

The Patriots have now indisputably established an NFL dynasty. Consider that since 2001, they have claimed 12 AFC East titles, six conference championships and four Super Bowls wins. Three other NFL teams have won two Super Bowls since 2001 – half of the Patriots total.

So The Hall went to work this offseason. It gutted the old Hall of Champions and Fan Zone exhibits back in April and quickly replaced them with a more regal championship exhibit called, The Super Bowl Experience, which delves into all four Patriots championship seasons and tells the stories that made those titles possible. 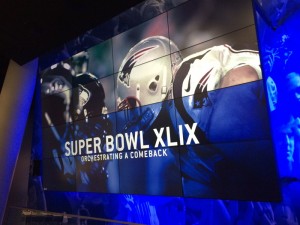 After winning a fourth Super Bowl, the Krafts made the decision to refresh our championship exhibit gallery and they committed to making it something our fans would be proud of,” Hall executive director Bryan Morry said. “We think our guests will love the new gallery and its design.”

Hall guests will enter the exhibit to the voice of Pat Summerall announcing the Patriots as a team in Super Bowl XXXVI followed by the sound of a military jet flyover and corresponding fireworks. Upon entering, the gallery, four 18-feet-high Lombardi Trophy graphics will welcome fans into individual pods dedicated to each Super Bowl championship. The back side of those larger-than-life graphics will feature an iconic image from the games.

A 58-inch touch screen monitor is housed within each pod where visitors can watch Super Bowl and playoff highlights, review season storylines, see the trophy presentations, delve into the Super Bowl statistics and more.

Directly across from the pods is a 16-foot-by-nine-foot video wall that features 12 vignettes that share some of the more iconic Super Bowl stories dating back to 2001.

“Our guests will love the video wall made up of 16 screens that can show a single image across all 16 or break up into segmented images on some of the screens,” Morry said. “We took what we believe to be some of the critical stories and people associated with the team’s championships and highlighted them on this video wall. It really brings the space to life.”

Butler comes to life as well … sort of. The Super Bowl Experience also features an interactive area where The Hall guest can make the Super Bowl XLIX game-saving interception on the goal line just as Butler did. This area of the exhibit uses Kinect technology to sense the guest’s movement and when it’s time to intercept the pass, a camera snaps a picture which can then be sent to the guest by email for sharing with friends and family.

After making The Interception, fans get to celebrate with the four Vince Lombardi Super Bowl trophies and the championship rings.

“The trophies will no longer be encased but will sit behind a glass railing,” Morry explained. “Projected video of the Super Bowl celebrations will play behind the trophies, and the rings will live inside the railing with lighting that makes them sparkle.”

After one snaps a few photos with the trophies, the exhibit naturally ends with a Super Bowl parade. Guests can sit inside a makeshift duck boat and watch the throngs of fans on hand at a Super Bowl parade through Boston’s streets.

“We changed the duck boat experience so that guests would see the parade from the players’ perspective looking out from the boat at the screaming fans that come out in freezing February weather to show their support and appreciation for the team,” Morry added.

This new exhibit also shows its appreciation by honoring and celebrating the four Super Bowl Champion New England Patriots teams in a majestic new exhibit that not only improves the guest experience at The Hall, but also provides fans with a sense of pride and accomplishment. The only thing missing is an actual red carpet.

Maybe that will come if the Patriots secure a fifth title in the near future.