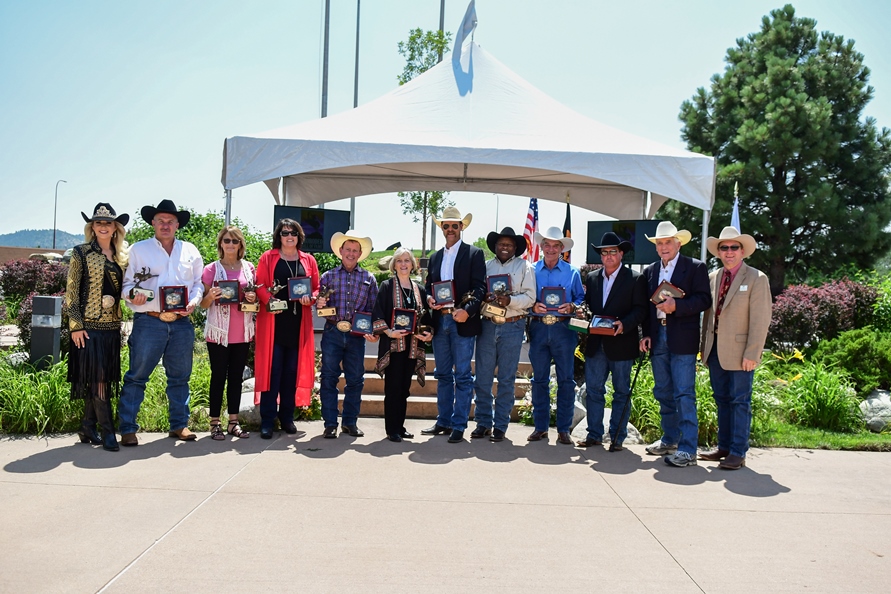 COLORADO SPRINGS, Colo. (Aug. 4, 2018) – The rodeo world recognized its royalty Saturday, as the ProRodeo Hall of Fame opened its doors to the 10-member 2018 induction class.

For the second time in the history of the ProRodeo Hall of Fame – 2017 being the first -barrel racers from the Women’s Professional Rodeo Association (WPRA) were among the class of inductees. The class included Kristie Peterson, Billie McBride and a WPRA equine inductee French Flash Hawk (Bozo).

Williams and Skelton were the pinnacle of team roping for nearly a decade. Saturday, they were soaking in their rodeo immortality.

“(Friday night) was really cool (at the ProRodeo Hall of Fame) seeing all these people who are going into the Hall of Fame with you and you got to know people who you may have not met before,” Skelton said. “I had a lot of friends and family there, and it was great. This puts an exclamation point on my career. I won the world championships, the NFR average and won the circuits and did everything I wanted to, and now this finishes off my career, even though I’m still going.”

“I think this (being inducted into the Hall of Fame) will be really neat for my kids and grandkids to see what we accomplished in the sport of rodeo,” Williams said.

“I was one of the first guys that could get it on them fast and handle the steers. Changing the game and developing a new way to do things, I take a lot of pride in being able to foresee some of the things we could do to improve. That part is neat, looking back, and now watching all the guys at the NFR basically come over the top of the chute and throw their rope when the barrier rope pulls. If you don’t do that you’re not going to be at the NFR many times.”

“There are a lot of things going through my mind, and the main thing is that this is something you never even expected or dreamed about,” Greenough said. “Ever since I was a kid all I ever wanted to do was rodeo, and I was fortunate enough to be able to do that. I had a good time and I still miss it (competing). This came along (being inducted into the ProRodeo Hall of Fame) and I was choked up again. Hearing people clapping, you miss that sound.

“There are no other jobs out there in the work force that I can think of where you get that kind of treatment. I never really looked at it as a job, I looked at it as a passion, and I was just lucky to have a pretty successful career at it. I never even dreamed of this, but holy cow this is awesome.”

Peterson, a four-time world champion, and her great horse French Flash Hawk, better known as Bozo, fittingly went into the Hall together. Following on the heels of Charmayne James and her great horse, Scamper, it was Peterson and Bozo that ended James’ streak of 10 straight world titles, capturing their first of four world titles in 1994.

Although Peterson and Bozo were not successful in defending their title in 1995, the duo would return to the top of the sport in 1996, and then win three straight gold buckles.

“Bozo was an amazing animal, but it took Kristie’s ability to respect Bozo’s personality that made Bozo the champion he was,” Elisabeth Hollmann said. “The fact they are being inducted at the same time is perfect because without the other one, neither of them would have had that career.”

“It’s a tremendous legacy to my parents, James and Frances Loiseau, they started with one mare and from there they built a dynasty of performance horses,” Hollmann said. “Kristie and Bozo brought national attention to that, and we are forever grateful to Kristie and Bozo.”

“I am proud to leave a legacy, especially since I have eight grandkids and seven of them are girls,” Peterson said. “I’m glad I rodeoed at the time I did, it was when team ropers and barrel racers were granted equal pay and that’s an important milestone in rodeo.

“My parents took my brother and me to rodeos in the summer, and without their sacrifice I couldn’t have done what I did,” Peterson said.

McBride accompanies Peterson and Bozo in the Hall as another four-time WPRA champion. She will be inducted posthumously, having passed away at the age of 90 on May 10, 2017.

McBride first saw barrel racing at an open rodeo event in 1937 and decided at 10 years old that it was the path she wanted to travel. McBride was a charter member of the Girls Rodeo Association (GRA), formed in her hometown of San Angelo, Texas, just over a decade later.

“What a wonderful day the Lord has made on behalf of my mother, and I want to sincerely thank everyone in the selection process for including her in this great group,” said Alva Jean Meek, McBride’s daughter. “Mother would be beyond thrilled, and she was excited to hear when the PRCA began inducting WPRA members last year.

“Thank you again, WPRA, the Hall of Fame and PRCA for helping preserve her memory. I guarantee she’s on Cloud 9 today.”

PRCA Gold Card Member Coffee is one of only three cowboys to be both a barrelman and a bullfighter at the Wrangler National Finals Rodeo. Now he’s inducted in the ProRodeo Hall of Fame for a career that’s still going strong.

“It means everything, it’s the culmination of a career. I didn’t plan on getting to here,” said Coffee, 63.

“Some of them are dinosaurs,” Coffee joked of the Hall of Fame inductees. “But they’re an important part of the past and being a dinosaur isn’t a bad thing. That’s what we are now, we have been there and done that, and to know that I’m in the midst of people like Jim Shoulders and Dean Oliver, in 20 years there will be guys getting inducted into the Hall and they will say ‘I’m in the midst of Leon Coffee.'”

Garrison was two types of cowboy, a fullback with the Dallas Cowboys and a ProRodeo competitor. He combined his stardom with football and rodeo to raise more than $4 million for multiple sclerosis with his Walt Garrison All Star Rodeos for more than 20 years.

“I always liked rodeo, but the main thing I always liked was the (rodeo) cowboys, because they would tell you the truth on a steer or a horse or anything, even though they are trying to beat you,” Garrison said.

Garrison received a football scholarship to Oklahoma State University. In 1966, he was drafted in the fifth round by the Dallas Cowboys. Part of his signing bonus with the Cowboys included a horse trailer and a Pontiac Grand Prix.

Garrison recalled what it was like to balance professional football and ProRodeo during his days as a Dallas Cowboy.

“There was a weekly rodeo in Mesquite (Texas) and after our team meeting on Saturday night most of my teammates went home to spend time with their wives; I went to Mesquite to bulldog,” Garrison said. “I told Neal Gay I had to be up during the rodeo – not because I had an ego and wanted fans to see me – because I wouldn’t be able to make curfew for the Cowboys if I didn’t compete during the performance.”

The Texas cowboy was instrumental in the U.S. Smokeless Tobacco program which sponsored individual cowboys and provided scholarships for college rodeo athletes. His charitable involvement also included, at the time of his induction, serving on the board of directors for the Justin Cowboy Crisis Fund for more than two decades.

Minick began his ProRodeo career in 1959, joining the Rodeo Cowboys Association after winning titles in both high school and college. He made his PRCA debut at the Mesquite (Texas) Championship Rodeo.

At the peak of his rodeo career, Minick qualified for the National Finals Rodeo as a bull rider in 1966. That season, he finished fourth in the world standings.

Although Minick reached the NFR as a contestant, that wasn’t his calling. His biggest contribution to rodeo came as a stock contractor.

The Billy Minick Rodeo Company produced top NFR bucking stock from 1968-76, including saddle bronc horse Streamer in 1972 and the bull Tiger in 1973. Tiger, considered one of the rankest bulls of all time, also won Bull of the Year in 1974.

“Pam (his wife) and I received a tremendous amount of awards and most of those awards were due to the people who worked for us,” Minick said. “Awards don’t define who you are, but let me tell you the (ProRodeo) Hall of Fame is the Holy Grail to Pam and me. All I ever wanted to do was be a cowboy and marry a cowgirl, and I got that accomplished.”

The next year marked the first time the rodeo took place.

The large number of people to attend continues today, with an estimated 10,000-15,000 attending a parade during rodeo week in the town of about 6,000.

The historic rodeo, which is 100 percent volunteer-run, also boasts that President Calvin Coolidge attended in 1927.

“I was out in the calving pasture, where cell service is slim to none,” said Clay Crago, Black Hills Roundup Chairman. “I always take my phone just in case, I can get on a hill and call for help. I happened to be up there, and the phone rang. I saw it was a call from Colorado Springs. I thought, ‘Oh, another dang telemarketer.’ But I answered it and got service. I was kind of at a loss for words (learning we were in the Hall). It was cool to be out doing what I loved and get that phone call for the rodeo that we put so much time in for.”

Now the Black Hills Roundup can add ProRodeo Hall of Fame inductee to its résumé as it prepares for its 100th year of the rodeo in 2019.

With the 2018 class included, the ProRodeo Hall of Fame has enshrined 267 people, 34 animals and 29 rodeo committees.