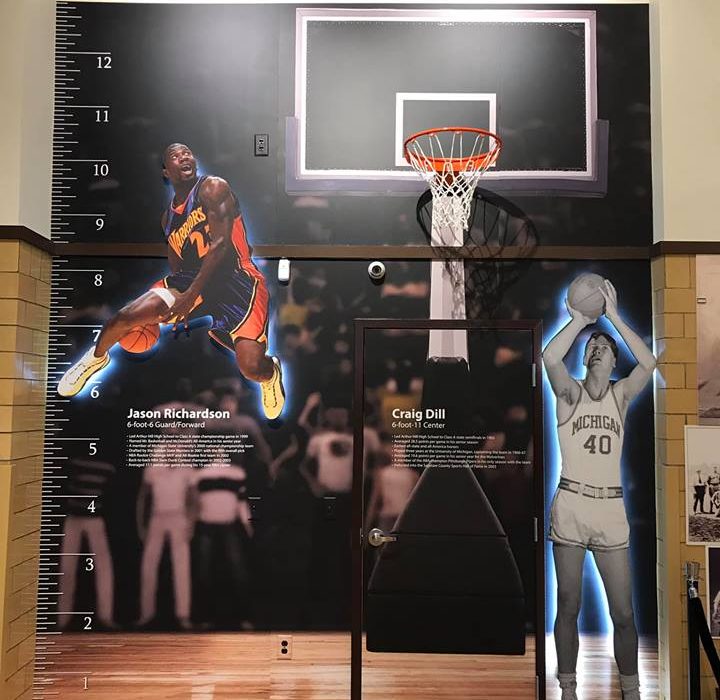 “We wanted to add an interactive display that kids will love,” Hall of Fame president Jack Tany said. “We’ve got one of the tallest players in Saginaw County history in Craig Dill, plus one of the biggest leapers in Saginaw history in Jason Richardson.

“The hoop is from North School and is at 10 feet. The photos are backlit, and they really look great. We went to Morley (Companies) and told them what we wanted and asked them if it could be done. They said no problem, and they did a great job.”

Both Dill and Richardson starred at Arthur Hill. Dill went on to play at the University of Michigan and in the American Basketball Association, while Richardson played at Michigan State University and 14 years in the NBA.

Richardson won the NBA Dunk Contest in 2002 and 2003, and Tany used a photo from the dunk contest to show Richardson’s leaping ability.

“We put a measuring stick on the side of the display so that kids or anyone could see where they stand as Richardson is jumping or how tall they are next to Craig Dill.”

Dill was inducted into the Saginaw County Sports Hall of Fame in 2003. Richardson retired in 2015 and is not yet eligible for induction.

The display fills one wall of the Saginaw County Sports Hall of Fame at the Castle Museum.