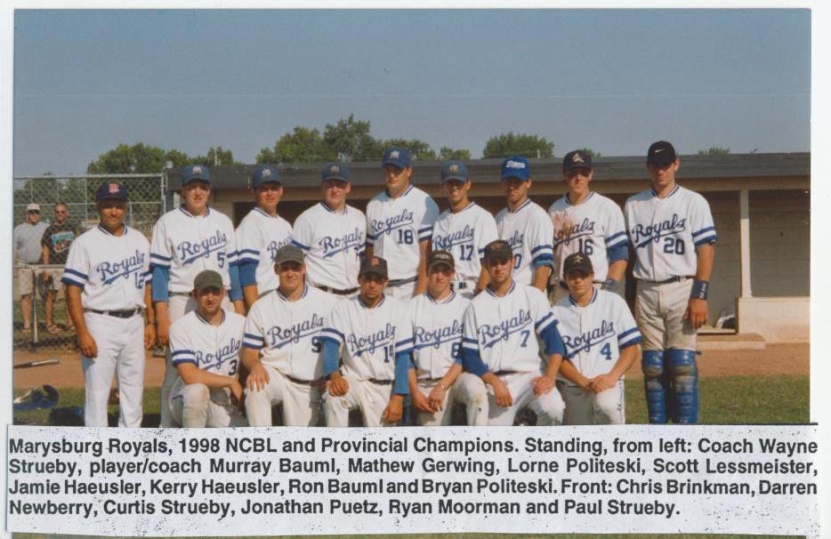 This tiny Hamlet of Marysburg, formerly known as Dead Moose Lake, has had baseball since 1900. In 1918, Father Casimir, a local priest, put together a team of local players, becoming one of the most successful teams in the 1920’s, traveling and winning many of the local tournaments. Marysburg has fielded a senior baseball team every year since. The 1930’s were tough but in the 40’s the team flourished and named the Royals. In the 1950’s, the Royals became the strongest team in the province. The team included many Strueby’s, Bauml’s, Puetz’s, the Stroeder brothers, Glen Hall, George Parker, Louis Wolsfeld, the Panagapko brothers, Britz’s , Wurtz’s and many more. Approximately ten thousand dollars prize money over two seasons. The Royals team of the 50’s was inducted into the Humboldt and District Sports Hall of Fame. In 1962, the North Central Baseball League was formed with the Royals joining in 1964, capturing their first two titles in 1966 and 1968. A change of guard in the 70’s saw some lean years, but by the late 1970’s was again on the upswing.

The team won the NCBL title and pennant in 2000, 2001, 2002, and 2003 They were the Senior ‘A’Champions in 2003 and the  Senior ‘AA’ runner ups in 2000 and 2001. In 2004 the North Saskatchewan Central Baseball League disbanded for lack of teams.  During the 40 year history of that league, the Marysburg Royals won the league title nineteen times and the league pennant seventeen times. The Royals have now been a member of the Saskatoon Senior Baseball League since 2004 and have continued providing highly competitive baseball,

The current Royals contribute to baseball in surrounding communities hosting clinics and camps for young ball players at the beautiful ball park in Marysburg. They provide six hours of top notch instructions in all aspects of the game for a minimal charge. Thanks to the Royals, the numbers in minor baseball are on the rise, again creating interest in the great game of baseball. The Royals still have home games throughout the ball season, playing Sunday double headers  against Saskatoon teams. The team is looking forward to embarking on their 98th consecutive season with twelve of the seventeen players sharing the same last name as the members of the 1918 team.Nine of the current team members are 4th generation Royals, a truly local team, with pride second to none!.