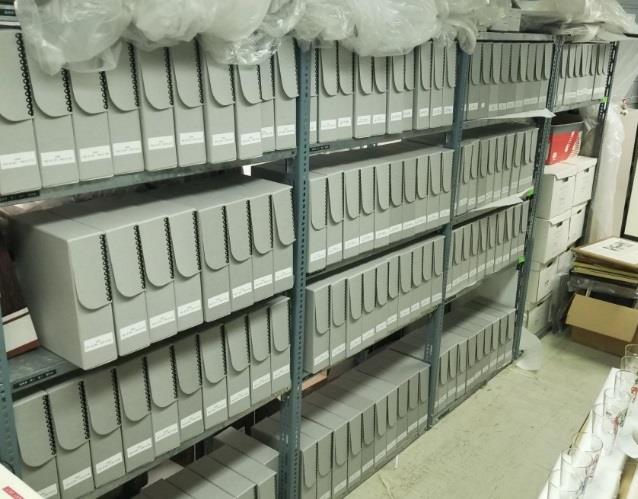 Where We Started (Before)

As the official repository of the province’s professional football team, the Saskatchewan Roughrider Football Club, the Saskatchewan Sports Hall of Fame’s (SSHF) collection includes 265 regular season and playoff programs spanning close to 80 years. Each program was contained in a media plastic bag and then contained in a mismatched collection of non-archival quality magazine holders/boxes that did not adequately store and protect them. Nor did this storage system serve to maximize available storage space.

To purchase 130 standard size acid-free lignin-free hinged lid containers to ensure the dust free, long-term preservation of the programs that would also maximize the use of vertical and lateral space within our storage area. As a secondary component of the project, all programs would be digitized and added to the Collective Access artifact database which would benefit access for in-house usage and external researcher access.

In the end 155 hinged lid containers were purchased over the course of 2 orders (July 30/18 and January 16/19). Due to a problem with the supplier, the first order of 130 boxes was not received until September 17/18 which meant that summer students were no longer available to assist with the complete transfer & digitization process. This resulted in some increased staffing costs for the SSHF, as well as a reassessment of the timing for the overall project. It was also determined as the project proceeded that the initial estimate for boxes required was a little short. This was mostly due to the inconsistent thickness of individual programs year-over-year and the inclusion of a number of one-off “special event”
programs in some years. This resulted in the 2nd order of 25 boxes being placed in early January which, thankfully, arrived expeditiously.

The transfer to a consistent sized archival quality box system has allowed us to maximize the shelving space in our main storage area, in addition to providing these priceless artifacts with a safe preservation system moving forward.

This project was completed in concert with the implementation of a new electronic cataloguing system, Collective Access, managed by the Saskatchewan Museums Association. The catalogue information for each item was updated as necessary in preparation for entry into this system. Collection pieces that had not yet been digitized were done so as part of the project. The final component of the process was to upload the digitized content into Collective Access. This has been the most time consuming component of the project due to the size of the digitized files and the (apparently) slow capacity of our high speed Internet connection.

As noted in our original application, the SSHF is prepared to cover all labour costs associated with this project. In addition, we are also prepared to cover the difference (if any) between the current currency
conversion between US and CAN funds and what it might be at such time as a cheque is issued.

The project has been a total success in the fact that we have met all of our stated objectives:

The Saskatchewan Sports Hall of Fame would like to extend their sincere thanks to the International
Sports Heritage Association for the significant contribution of funds through the Founders Fund Special
Project Grant which made this upgrade possible. It is much appreciated.