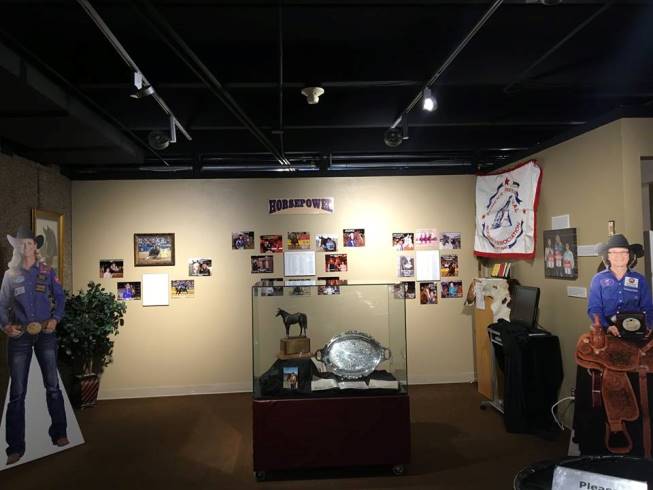 This exhibit is housed in the 101 Gallery and will remain open until September. Visitors can learn the history of the WPRA from when 38 women met in a hotel room in San Angelo, Texas, in 1948 to start the Association called the Girls Rodeo Association (GRA) through the historic 2017 ProRodeo Hall of Fame inductions, that will include barrel racers for the first time ever. In addition, there is a flair for fashion clothing display showing the clothing trends through the years, a look back at the 1988 and 2002 Olympic Command Performance Rodeos held during the Olympic Games in Calgary and Salt Lake City, respectively and a Horsepower section honoring the horses that have been awarded with honors such as AQHA Horse of the Year, Horse With the Most Heart and Rising Star Award.

“I am thrilled with the new partnership between the ProRodeo Hall of Fame and the WPR,” said Kent Sturman, Director of the ProRodeo Hall of Fame. “Not only will we now honor the women who excel in the sport of barrel racing, but with this exhibit, we can educate our guests and fans about the history of the WPRA and promote this important segment of the sport of professional rodeo. These outstanding women have been instrumental in advancing this event and they deserve to be celebrated.”

Bringing symbolism to this new chapter in the history of the PRCA and WPRA is best summed up with the induction of the horse known as Star Plaudit “Red.”

Star Plaudit holds a very unique record in the world of professional rodeo, one that is not likely to ever be duplicated.  The bay gelding won two World Championships in the sport in a single year and contributed to a third, at the age of 12. Red, as he was affectionately known, carried his owner Sherry (Combs) Johnson to the GRA World title in the barrel racing and close family friend Tom Nesmith to the RCA world title in the steer wrestling and helped the Oklahoman also claim the RCA All Around championship, all in 1962.

The ProRodeo Hall of Fame, which is a popular Colorado Springs attraction for rodeo fans and tourists alike, has already inducted 250 people, 27 rodeo committees and 31 animals. The 2017 ProRodeo Hall of Fame Induction Festivities are scheduled for August 3-5 and the actual ceremony will take place at 10 a.m. MT on Aug. 5 in Colorado Springs, Colo. The Hall of Fame is currently open from 9 a.m. – 5 p.m. Wednesday – Saturday. Starting May 1 – Aug. 31 they will be open seven days a week from 9 a.m. – 5 p.m. More information can be found at www.prorodeohalloffame.com.