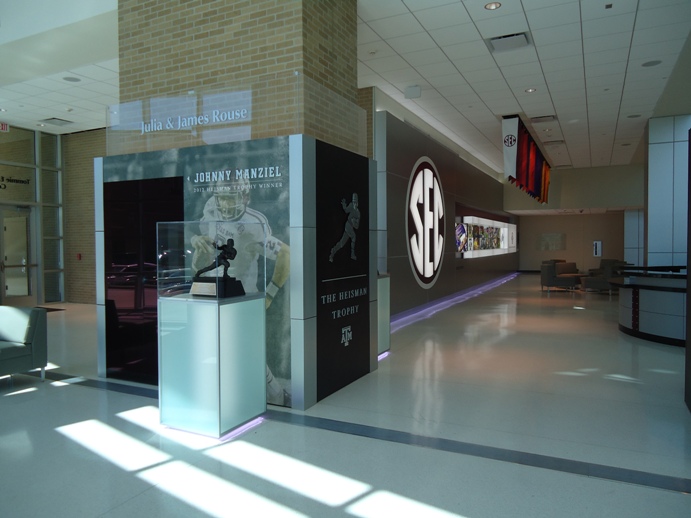 The Bright Football Complex in College Station, Texas, is a facility for Texas A&M football athletes
showcasing the history and athletic achievements of the elite football players known as the “Aggies.”
When the college announced it was kicking off a major renovation of the Complex in 2012, Nashville’s
1220 Exhibits was delighted to be among the participants for this prestigious project. 1220’s scope of
work would include a series of large-scale media presentations, fabrication of the Heisman Trophy case and Aggie icon, and Aggies in the NFL exhibits for the Bright Complex’s Entrance Atrium. According to Heather McKnight, Account Manager 1220 Exhibits, “We partnered with Silver Oaks Communications in Moline, Illinois, on this project because of their expertise with AV software and development. We have worked with Silver Oaks for a number of years on a variety of projects and we were confident this was a perfect fit for their talents.”

A kick-off meeting was held in College Station with Texas A&M representatives; Populous, a design firm
based in Kansas City, Missouri; and 1220’s core team. Goals, standards and time lines were established and all parties began mobilizing their team for the project. From the start, Texas A&M and Populous made clear that this facility was to be the best, brightest and most innovative facility for recruiting the top football players in the Southeastern Conference (SEC). Implementing an aggressive schedule, the Bright Complex was renovated and the exhibits fabricated and installed within a 13-month period.

The centerpiece of the Bright Complex’s Atrium, fabricated by 1220 Exhibits, is a glass and metal
architectural element with the Aggie icon featured on the outside of the structure, and seven, 55” portrait oriented monitors on the inside. Controlled by a touchscreen kiosk, this immersive multimedia exhibit includes all original video footage shot on location by Silver Oaks. The dynamic footage gives an up-close look at the unique traditions and special experiences of being an Aggie football player – including videos of players running on the field, the famous “Midnight Yell,” and a fast-paced, energizing 2½-minute main feature highlighting the game-day experience.

With this in-depth look, recruits can imagine their football future at Texas A&M and the prowess of their
competition through the “SEC Experience,” where large back-lit graphics of SEC school stadiums are
displayed under their school banners and logos. Visitors can also learn about the University’s two
Heisman Trophy winners through display cases housing the actual Heisman Trophies, and large text
panels that include player profiles.

1220 and Silver Oaks showcased their collaborative AV skills through additional interactive stations and exhibits throughout the Atrium. Silver Oaks created the interactive content and 1220 wired and installed it, allowing visitors to learn more about Texas A&M’s athletic relationships.

Interactive stations and exhibits include the following:

“Design Your Own Uniform” where visitors can customize their own Aggie uniform. Working with
Adidas, Silver Oaks created a large touchscreen wall showing a life-size player in 3D. Visitors can mix
and match uniform elements while viewing the display in real-time 3D. Visitors also have the ability to
send the image to friends and family via email.

“Aggies in the NFL” is a database interactive designed to allow users to search all past and present Aggie coaches and players who have had NFL success. A useful recruiting tool, this interactive lays out a potential pathway to playing in the NFL. Mentors can draw from these success stories as they help young players achieve their ultimate goal of being part of an NFL team.

Now complete, the Bright Football Complex is more than just impressive – it’s unlike any college
football athletic center. Texas A&M’s vision and willingness to push the boundaries, with the help of
partners like 1220 Exhibits, Populous and Silver Oaks, made the project a huge success. 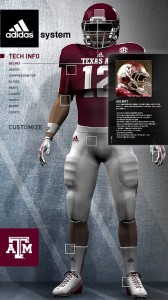