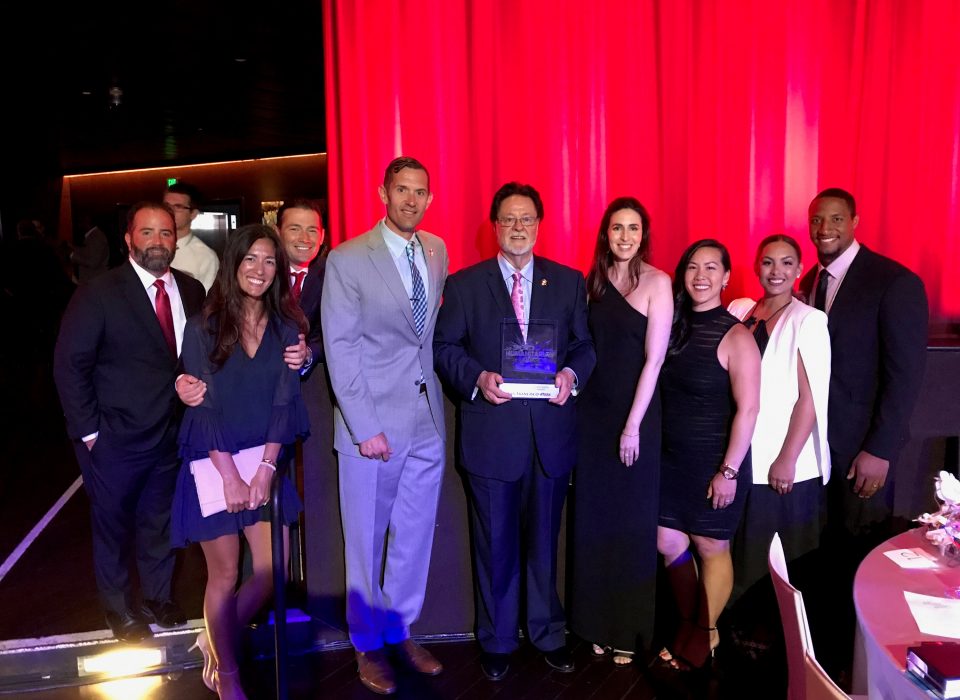 BY ESPN FOR EDUCATION EFFORTS IN THE COMMUNITY

ESPN’s Sports Humanitarian Team of the Year Award represents a sports team that demonstrates how teamwork between athletes and their team’s community relations efforts or foundations can create a significant impact on a community or cause. As winner of the Sports Humanitarian Team of the Year Award, the 49ers will receive a $100,000 grant from ESPN to be directed towards a charity related to the award-winning humanitarian efforts.

“Every Sunday, the 49ers take the field to win. The other 349 days of the year, we want to be the best football team and the best community citizens,” said 49ers Co-Chairman Dr. John York. “Through the 49ers Foundation’s efforts to keep kids ‘Safe, On Track, and In School,’ we inspire Bay Area children to succeed in life using sports as a pathway. We are honored that ESPN recognizes the 49ers educational efforts in the community.”

In addition to the San Francisco 49ers collectively donating over 1,200 hours of volunteer time to 75 community events and committing $4 million to local non-profits in 2016 alone, the team is also at the forefront of two innovative and highly impactful programs that use football to make lasting changes in the Bay Area.

First, the 49ers STEM Leadership Institute is a six-year curriculum that begins in 7th grade, continues through high school, and seeks to prepare students with high academic potential in STEM. During the 2016-2017 school year, over 40,000 hours of education have been provided, including integrated and open lab hours, tutoring, and enrichment events. Of the 60 students in the 2020 class, 50% have 4.0 GPAs and the average GPA is 3.81.

Second, the 49ers STEAM Education Program – which opened in 2014, provides informal learning experiences for K-8 students through its program that teaches standards-aligned (Common Core and Next Generation Science) lessons using the STEAM principles of science, technology, engineering, art, and mathematics. Housed within the Denise DeBartolo York Education Center at Levi’s Stadium, the program has reached over 150,000 participants since inception – free of charge – with over 50 percent of students coming from Title I designated schools.

The team’s youth efforts additionally translate on the field, where the team promotes football-focused physical activity for boys and girls through the 49ers Youth Football Program. The program, experienced by more than 31,000 participants as part of 138 events held in partnership with the NFL’s “Play 60” initiative in 2016, encourages children to get outside and play for 60 minutes each day.

A highlight reel of the San Francisco 49ers community and education efforts is available here: https://49ers.egnyte.com/dl/lPMeFCvMxc

A photo gallery of the San Francisco 49ers community and education efforts is available here:

About the San Francisco 49ers Foundation

The San Francisco 49ers Foundation is the non-profit community funding extension of the San Francisco 49ers. Now in its 26th year, the 49ers Foundation supports development programs for underserved youth to keep them “Safe, On Track, and In School.” Since 1991, the Foundation has donated $40 million to non-profits, committing $4 million in 2016 and supporting 75 community outreach events representing over 1,200 hours of service from 49ers players, alumni, ownership, coaches, executives and staff.  In recognition of their unparalleled commitment to charitable giving, the 49ers were the winners of the Beyond Sport 2015 Sport Team of the Year Award and one of four finalists for the 2015, 2016 and 2017 ESPN Sports Humanitarian Team of the Year Award. For more information on the 49ers Foundation, please visit http://www.49ersfoundation.com.

ESPN believes that, at its very best, sports uplifts the human spirit. Its corporate citizenship programs use power of sport to positively address society’s needs through strategic community investments, cause marketing programs, collaboration with sports organizations and employee volunteerism, while also utilizing its diverse media assets. For more information go to www.espn.com/citizenship.