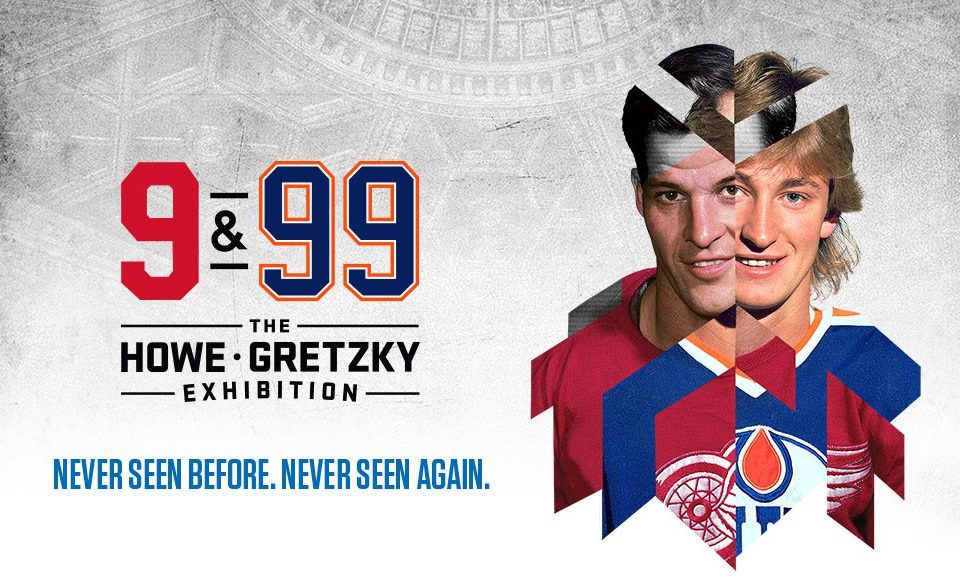 An exhibition unlike any other, paying homage to the most prolific scorers of our generations.
Witness the greatest compilation of milestone artifacts and rare personal memorabilia, all
hand-picked by Hockey Hall of Fame curators from the Howe and Gretzky family collections.
Revel in the legacy and indelible bond of ‘Mr. Hockey’ and ‘The Great One’.
On now for a limited-time through March, 2020. Don’t miss it.

Limited-time exhibit celebrates their storied careers and the indelible bond between these two Legends.

The Hockey Hall of Fame officially opens a 2,000 square foot exhibit that pays homage to the NHL’s most prolific goal scorers,  “Mr. Hockey ” and “The Great One”, titled ‘9 & 99 : The Howe  Gretzky Exhibit’.   This comprehensive tribute explores, through mirrored individual displays, how each legend transcended the game for their respective generations, while highlighting the similarities in their Hall of Fame careers.  The more than 150 historic artifacts hand-picked by Hall of Fame curators from the Howe and Gretzky family collections range in years from 1946’s Detroit Red Wings jacket presented to Howe as a “signing bonus” all the way to Gretzky’s final NHL game in 1999.  The display also incorporates various multi-media, captivating video vignettes and rare photos.

“Highlighting two of the greatest hockey players of all time with this immersive display is fitting,” said Phil Pritchard, Hockey Hall of Fame Vice President, Resource Centre and Curator.  “We would like to thank the Howe and Gretzky families for all of their assistance in helping us with this exhibit and preserving the history of hockey.  We are excited for our guests from around the world to see these historic artifacts and to relive their magnificent careers.”

For more information regarding the Hockey Hall of Fame, visit http://www.hhof.com.