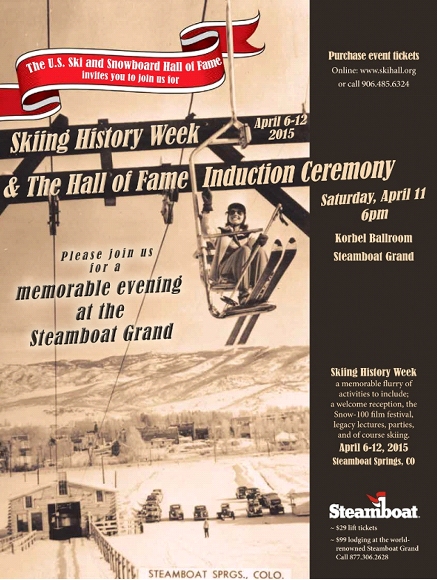 STEAMBOAT SPRINGS, CO (March 17, 2015) – America’s Ski Town U.S.A, Steamboat Springs, will honor 10 new inductees to the U.S. Ski and Snowboard Hall of Fame as the site of the annual induction ceremony capping off the April 6-12 Skiing History Week in the famous Colorado resort. The celebration of skiing history coincides with the centennial of Steamboat’s famous Howelsen Hill.

The weeklong gathering in Steamboat is a collaboration between the U.S. Ski and Snowboard Hall of Fame and the International Skiing History Association. The annual event, open to anyone, brings together hundreds of ski history enthusiasts for skiing, social events and informal skiing presentations, as well as the annual Hall of Fame Induction Saturday, April 11 at the Steamboat Grand – expected to attract a sellout crowd of over 500.

“Our sport has a great legacy,” said Hall of Fame Chairman Tom Kelly. “Skiing History Week and the Hall of Fame Induction have grown considerably the last few years to celebrate the stars and pioneers of our sport and to reminisce about the great history of skiing that we all enjoy.”

Among the highlights will be the Hall of Fame’s Snow-100 Film Festival at Steamboat’s Chief Theater, featuring some of the best ski films of the past century. The film festival runs continuously from 4:00-10:00 p.m. daily from Wednesday through Friday, April 8-10.

Skiing History Week will kickoff Wednesday, April 8 at the fabled Howelsen Hill Lodge, celebrating the hill’s centennial. Two Legacy Lectures are planned. On Thursday evening, April 9, speakers will focus on Steamboat’s own Buddy Werner, to be held at the Buddy Werner Memorial Library from 7:00-9:00 p.m. Friday, April 10 attention will focus on an Olympic panel discussion, exploring how and why Steamboat Springs became such a hotspot in producing Olympic athletes.

Friday night, the International Skiing History Association will hold its annual awards dinner at the Steamboat Grand. Among the honorees will be the legendary Willy Bogner alongside notable local Honored Members Billy Kidd, Hans Geier, Nelson Carmichael and Deb Armstrong.

The week will culminate at the Steamboat Grand Saturday evening with the annual Hall of Fame Induction. Among the honorees will be a host of ski and snowboarding stars and ski industry pioneers. Each inductee will be honored with a medal and given the chance to share stories of their colorful careers with their family, friends and peers. A late night afterburner celebration party will follow on Gondola Square.

Skiing History Week closes on Sunday, April 12 with an opportunity for fans to enjoy First Tracks with the Hall of Famers.

Registration is still open for Skiing History Week, including discounted skiing and lodging at the Steamboat Grand. Tickets are still available for the Hall of Fame Induction, but it is expected to sell out. To see a full schedule and register for any or all of the week’s festivities, please go to www.skihall.comand click on Skiing History Week or call 906.485.6324.

HELP THE TEAM
The U.S. Ski Team relies solely on the support of the American public. Click here to support the team.