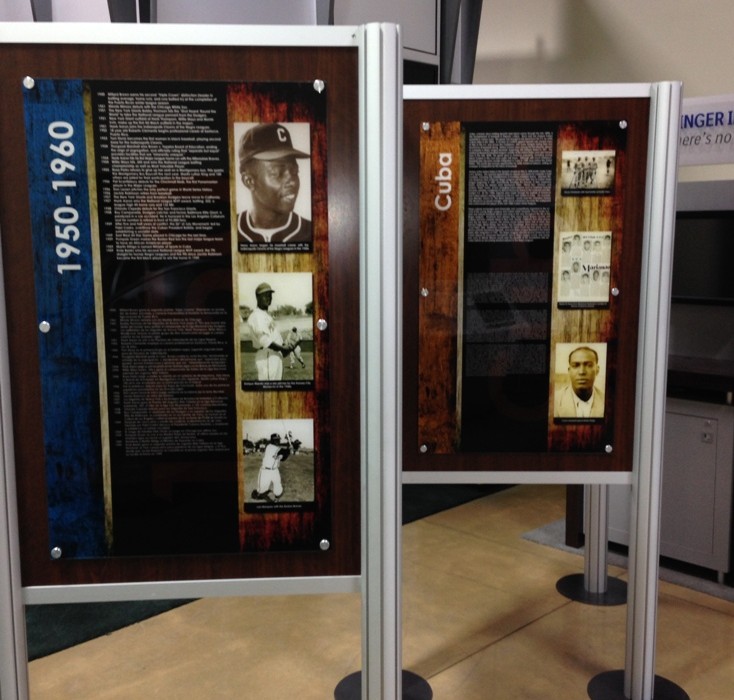 Negro Leagues Beisbol traveling exhibition is ready for rentals. The exhibition explores the historical connections of African American baseball to Hispanic culture and communities. It first appeared in the fall of 2014 in Kansas City and has now been retrofitted for travel.  The display features historical timelines, photographs, and large photographic panels of key countries, teams, events, and individuals from 1860-1960. It was designed by Exhibit Associates and prepared for travel by Display Studios, both Kansas City based companies.

The traveling tour of Beisbol has been dedicated to the memory of Orestes “Minnie” Minoso, who passed away in March 2015.  The Cuban born Minoso was a baseball legend in the Negro Leagues, Major Leagues, and Caribbean Baseball.

The Negro Leagues Baseball Museum (NLBM) seeks to fill dates (up to six weeks)  from July 2015 through October 2020 for galleries and museums in Major League Baseball cities primarily, but other locations will be considered. Inquiries can be directed to Dr. Raymond Doswell at [email protected], or 816-221-1920 to request an information package with venue requirements and costs.

Marking its 25th Anniversary in 2015, the Negro Leagues Baseball Museum, Inc. is located in the 18th & Vine Jazz District of Kansas City, Missouri.  It is designated by the United States Congress as “America’s Home for Negro Leagues Baseball history,” researching and preserving the history of African American Baseball from the late 1800s through the 1960s. Go to  www.NLBM.com or www.facebook.com/negroleaguesbaseballmuseum for more information.