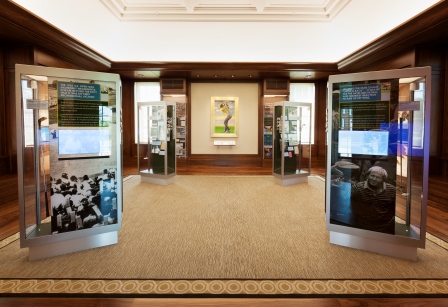 On May 27, the USGA Museum held a grand opening ceremony for The Jack Nicklaus Room. The new space, which celebrates the life and career of the 18-time major champion, joins galleries that honor Bob Jones, Ben Hogan, Arnold Palmer and Mickey Wright. The 1,200-square-foot exhibit space contains more than 80 artifacts, several on loan from the Jack Nicklaus Museum in Columbus, Ohio.

From his first U.S. Open victory in 1962 to his last Green Jacket in 1986, Nicklaus had the skill and the determination to compete more successfully than anyone else in golf’s major championships. He compiled the best amateur record since his hero, Bob Jones, capped his career by winning the Grand Slam in 1930. Nicklaus won two U.S. Amateurs and played on two victorious USA Walker Cup Teams. He turned professional in November 1961 and embarked on a career that included 73 PGA Tour victories and a record 18 major championship titles. He won a record-tying four U.S. Opens, six Masters Tournaments, three British Opens and five PGA Championships—an amazing testament to his three decades of sustained excellence.

Nicklaus did not become golf’s greatest major champion on ability alone, however. His competitive spirit, self-belief, commitment, integrity, perseverance and vision were among the values that helped turn his unquestioned skills into unmatched success. The room chronicles Nicklaus’ accomplishments by utilizing 10 touchscreen interactives, which allow visitors to hear directly from Jack. Nicklaus uses his own words to tell you what made him a successful player; respected golf course designer and businessman; and dedicated husband, father and grandfather. By utilizing this first-person narrative technique, we hoped to create a uniquely personal and intimate experience.

Some of the highlights of the room include a painting of Nicklaus, shown at the peak of his career during his 1972 U.S. Open victory at Pebble Beach. The artist, Harold Riley, has painted portraits of popes, U.S. presidents and the Royal Family of the British Monarchy. There is also a bronze sculpture of Nicklaus, created by renowned artist Zenos Frudakis. Jack is shown celebrating a birdie on the 71st hole of the 1980 U.S. Open at Baltusrol. The image is one of his wife Barbara’s favorites. Some of the iconic artifacts in the room include: