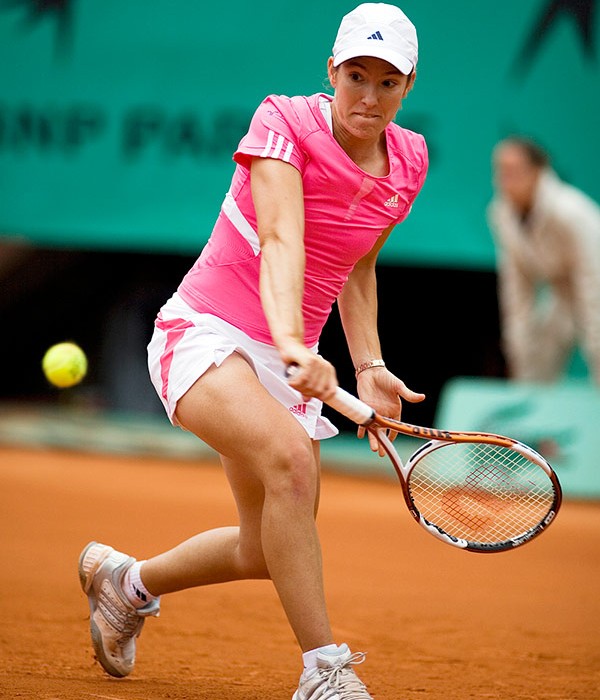 NEWPORT, R.I., October 23, 2015 – Justine Henin, a former WTA Tour world No. 1 and seven-time major champion, Marat Safin, a two-time major champion and former world No. 1 on the ATP World Tour, and Helena Sukova, who won 14 major titles in doubles and mixed doubles, have all been nominated for induction into the International Tennis Hall of Fame. All three are nominated in the Recent Player Category for induction in the Class of 2016. In addition, Yvon Petra, a notable French tennis player of the 1940s, and Margaret Scriven, British tennis champion of the 1930s, have been nominated posthumously in the Master Player Category. There are no nominees in the Contributor Category for 2016.

Induction into the International Tennis Hall of Fame is the highest honor available in the sport of tennis and it represents the sum of one’s achievements at the highest possible level. Since 1955, the honor of Hall of Fame induction has been awarded to 243 tennis champions and leaders representing 21 nations. Located in Newport, Rhode Island, the International Tennis Hall of Fame is a non-profit organization built around a mission of preserving and celebrating the history of tennis, honoring its greatest champions, and inspiring its future.

“Throughout their careers Justine Henin, Marat Safin, and Helena Sukova all consistently demonstrated their excellence as tennis players and their commitment to our sport. They worked relentlessly toward tennis’ top goals and as a result, achieved world No. 1 status, won the sport’s top trophies, and inspired fans and peers worldwide. They’ve left a lasting and positive impact on tennis and it is a pleasure to announce their nomination to receive our sport’s highest honor, induction into the International Tennis Hall of Fame,” said Stan Smith, who was inducted into the Hall of Fame in 1987 and now serves as the International Tennis Hall of Fame President and Chairman of the Enshrinee Nominating Committee.

Smith continued, “Also this year, we recognize the achievements of two of tennis’ great early champions – Yvon Petra, who claimed a Wimbledon title after five years as a prisoner-of-war, and Margaret Scriven, who won two back-to-back singles titles at the French Championships. Their success is part of the sport’s storied history, and we’re glad to recognize their accomplishments.”

Of the nomination, Justine Henin commented, “The Hall of Famers are individuals who I have admired from the time I was a young girl, throughout my career, and to this day. To be nominated for induction into this group and to have my career recognized in this way is a great honor, and I thank the committee for the nomination.”

Marat Safin commented, “To be part of a Hall of Fame is every athlete’s dream. It is a great honor to have my tennis career recognized in this way, and I am proud to represent Russian tennis with this nomination for such a prestigious honor in our sport.”

Helena Sukova stated, “It is a great honor for me to be selected as a nominee for the Hall of Fame. Being recognized as part of tennis history is all I can ask, now that my playing days are over. The International Tennis Hall of Fame is the most prestigious group of legends in the sport, and it is an honor to have my career recognized with a nomination for this most esteemed stage.”

Voting on the Hall of Fame ballot will take place over the next several months, culminating with an announcement early next year to reveal the Class of 2016. The Class of 2016 Induction Ceremony will be hosted on Saturday, July 16, 2016 during Rolex Hall of Fame Enshrinement Weekend at the International Tennis Hall of Fame in Newport, Rhode Island.

A detailed description of the induction voting process follows the nominee biographies below:

Recent Player: Justine Henin, Marat Safin, and Helena Sukova
Eligibility criteria for the Recent Player Category is as follows: active as competitors in the sport within the last 20 years prior to consideration; not a significant factor on the ATP World Tour, WTA Tour, or Wheelchair Tennis Tour within five years prior to induction; a distinguished record of competitive achievement at the highest international level, with consideration given to integrity, sportsmanship, and character.

While smaller in stature than many of her competitors, Henin was applauded for her mental toughness and an outstanding all-around game. She was known for a powerful forehand, superior volley skills and court coverage, and her famous one-handed backhand.

In 2004, Henin won the Olympic Gold Medal in Athens. She was a dedicated Belgian Fed Cup team member, leading the team to their first Fed Cup title in 2001 and into the finals again in 2006.

Since retirement, Henin’s ventures have included running a tennis academy in Belgium, as well as a foundation dedicated to medical needs of children.

Marat Safin, 35, of Russia, is a two-time Grand Slam tournament champion. He held the world No. 1 ranking for nine weeks, and was in the world top-five for 119 weeks. Safin was regarded as a power player with strong groundstrokes and a particularly dangerous backhand.

Safin won his first major title at the 2000 US Open, when he defeated Pete Sampras. He is the first and only Russian man to have won the title. Safin went on to win the 2005 Australian Open with a victory over Lleyton Hewitt, defeating then world No. 1 Roger Federer in a five-set battle en route to the final.

Safin was an integral member of the Russian Davis Cup team for 11 years. In 2002, he was instrumental in leading Russia to defeat France for their first Davis Cup victory. In 2006, he won the deciding rubber against Argentina to claim the title for Russia again.

Since retiring from the ATP World Tour, Safin has served on the Russian Olympic Committee and has worked with the Russian Tennis Federation. In 2011, he was elected to serve in the Russian Federal Parliament.

Helena Sukova, 50, of the Czech Republic, was the world No. 1 ranked doubles player for 68 weeks and she won 14 Grand Slam tournament titles in women’s doubles and mixed doubles over the course of her career. Sukova also had a noteworthy singles career, achieving a career high of world No. 4 and reaching the final two times each at the Australian Open and the US Open.

In all, Sukova won an impressive 69 doubles titles and she compiled a doubles record of 752-220. She achieved a career Grand Slam in women’s doubles, winning four titles at Wimbledon, two at the US Open, one at the Australian Open, and one at the French Open. In addition, she won one WTA Championships doubles title.

In singles competition, Sukova had a winning record of 614-307 and she won 10 singles titles. One of her most notable singles victories was when she defeated Martina Navratilova in the semifinal round of the 1984 Australian Open, ending Navratilova’s historic 74-match winning streak.

Sukova was a standout competitor for her country, as an integral part of the Czechoslovakia/Czech Republic Fed Cup teams for 13 years. She was a playing member of four championship teams (1983, 1984, 1985, 1988). Additionally, she won two Silver Medals at the Olympic Games, partnered with Jana Novotna (1988 and 1996).

Sukova retired in 1998, and has remained highly active in the game. In 1999, she helped re-establish the International Lawn Tennis Club of the Czech Republic and became its president. She is a co-founder of the Kids and Junior Tennis Advancement Organization in the Czech Republic. She is also a member of the Champions for Peace Club, a group of elite athletes committed to serving peace in the world through sport, created by Peace and Sport Organization. Additionally, Sukova earned a doctoral degree as a psychologist at Palacky University.

Yvon Petra was a notable French tennis player of the 1940s. His career success came at a challenging time, straddling World War II and consequent interruptions to the French Championships. Petra won the Wimbledon singles title in 1946, ending a 19-year drought of French victors and making him the last French man to have done so. Perhaps most notably, his historic Wimbledon victory came following five years as a prisoner of war in Germany.

In addition to his success at Wimbledon, Petra won two doubles titles and a mixed doubles title at the French Championships.

She was the first British woman and only unseeded player ever to win the French National Championships, which she did in 1933. She successfully defended her title the following year, making her the last British woman to win the same major tournament for two consecutive years.

Scriven was the first left handed player in tennis history to win a major tournament title.

ABOUT THE INDUCTION PROCESS

Voting on the Hall of Fame ballot will take place over the next several months, culminating with an announcement early next year to reveal the Class of 2016. The Class of 2016 Induction Ceremony will be hosted on Saturday, July 16, 2016 during Rolex Hall of Fame Enshrinement Weekend at the International Tennis Hall of Fame in Newport, Rhode Island.

Nominees for Hall of Fame induction are selected from nominations submitted by the general public and tennis community. The ITHF Enshrinee Nominating Committee, which meets annually in June, then reviews all nominations and determines the ballot. The committee is comprised of 23 individuals from around the world with expertise in various areas of the sport. Individuals can be nominated in three categories – Recent Player, Master Player, and Contributor. There are no nominees in the Contributor Category this year.

Following this announcement of the nominees, a ballot will be sent to the voting groups.

The Recent Player Voting Group, which consists of tennis media and Hall of Famers, will vote on the Recent Player nominees. The Master Player & Contributor Voting Group, which consists of historians, Hall of Famers, and individuals who are highly knowledgeable of the sport and its history, will vote on the Master Player nominees. To be inducted in either category, an affirmative vote of 75% of returned ballots is required.

Votes are tallied by an independent accounting firm. The Induction Class will be announced the first quarter of 2016.