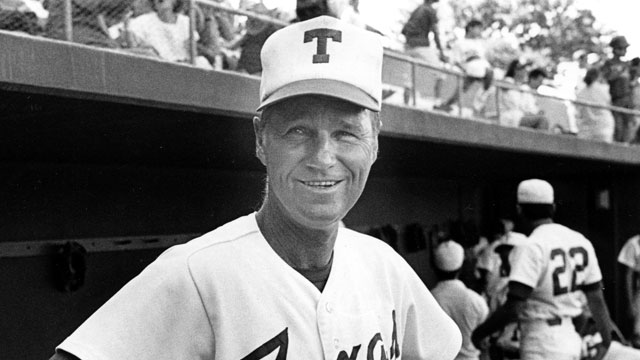 LUBBOCK, Texas — The National College Baseball Hall of Fame announced today that it will honor the coaching career of legendary University of Texas coach Cliff Gustafson with an event in Austin.

Titled “A Salute to Coach Gus,” the event will honor Gustafson, who served as skipper of the Longhorns from 1968 to 1996. A member of the Hall of Fame’s inaugural induction class in 2006, he guided his teams to an impressive 1,466 wins, with a record 17 College World Series appearances and two national titles in his 29 seasons at the helm.

“The time is now to honor Coach Gus,” said Mike Gustafson, president and CEO of the National College Baseball Hall of Fame and no relation to the coach. “This will be our first campus event to honor one of our inductees, and he is a fitting choice.”

The evening will feature several of his Hall of Fame players, including Greg Swindell, Roger Clemens, Burt Hooton and Keith Moreland. Players from the 1975 and 1983 national championship teams also will be part of the program.

“With so many of his guys scheduled to be on stage with Coach Gus, I’m sure the evening will be part roast and part ‘This Is Your Life’,” Gustafson said.

The event will take place at the Oasis Restaurant in Austin on Jan. 30. Tables of eight start at $500 and are on sale now.

For more information on “A Salute to Coach Gus” or to purchase tables for the event, contact Mike Gustafson at [email protected] or call (806) 749-2233.