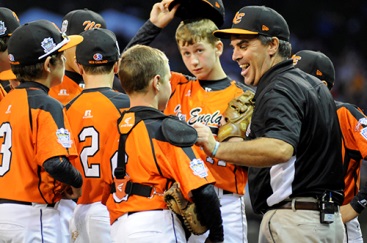 David Belisle, a Little League coach from Cumberland, R.I., who was nominated for the Sports Illustrated Sportsman of the Year, is among the speakers at the International Sports Heritage Association’s 45th annual Conference in October in Williamsport, Pa. He was named as a 2014 National Federation of State High School Associations’ Coach of the Year.

Mr. Belisle became a national sensation after his emotional speech to his team after elimination from the 2014 Little League Baseball World Series. ESPN cameras followed as Coach Belisle took his team to the outfield for “the talk.” His inspiring words were heard by millions and resonated at all levels of sport.

His post-game speech went viral and prompted his nomination as Sportsman of the Year. It is featured in a You Tube video link here.

Mr. Belisle’s unwavering sportsmanship and ability to inspire not only his New England Region Championship team, but also millions of people around the world, was captured in a nomination essay written by SI’s Seth Davis.

“If Belisle’s Little League coaching career really is over, then it is fitting that he should go out with a loss. His words would have had far less meaning had they been delivered in the wake of a victory. Belisle was right when he said his boys should feel proud of what they had done, but as it turns out, he was right about the rest of us, too. We like sportsmen,” wrote Davis.

He was among 20 individuals nominated for this honor, which Sports Illustrated has bestowed since 1954. The recipients are some of the biggest names in sports, including Little League graduates Drew Brees, Derek Jeter, Brett Favre, and Carl Yastrzemski. Fittingly, in 1957, Stan Musial was honored as Sportsman of the Year.