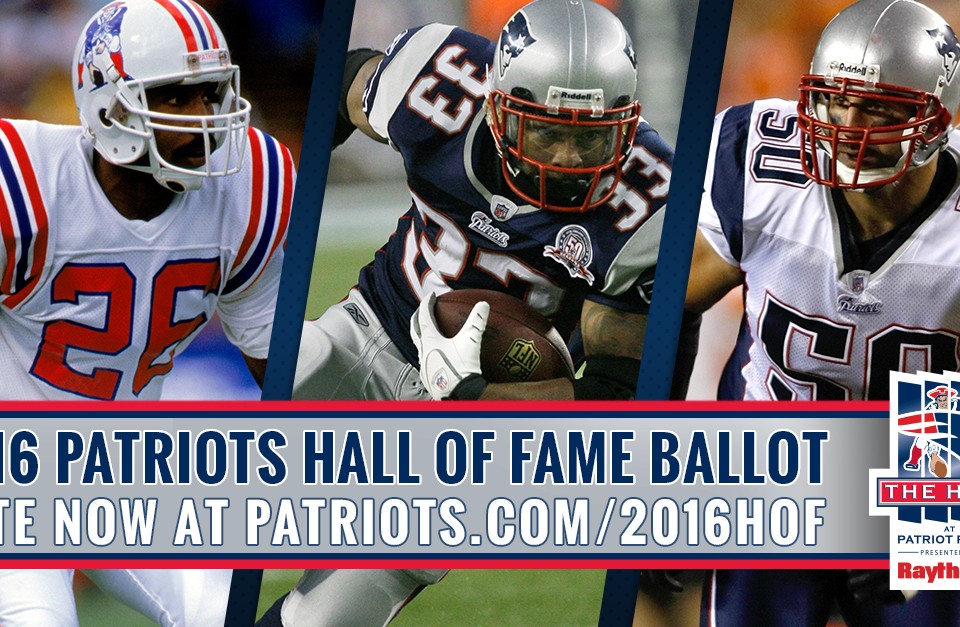 A 20-person nomination committee selects Raymond Clayborn, Kevin Faulk and Mike Vrabel as the 2016 Patriots Hall of Fame finalists. Patriots fans now have until May 14 to vote for the finalist most deserving of hall of fame honors. 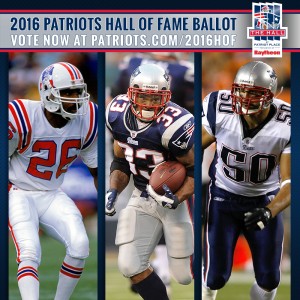 FOXBOROUGH, Mass. – The New England Patriots announced that three former Patriots have been selected as finalists for this year’s induction into the team’s hall of fame. This year’s finalists (listed in alphabetical order) are cornerback Raymond Clayborn, running back Kevin Faulk and linebacker Mike Vrabel. Faulk and Vrabel both helped the Patriots earn the first three Super Bowl championships in franchise history. Clayborn is a finalist for the third straight year, while Faulk and Vrabel are both first-time finalists.

Starting today, Patriots fans are encouraged to vote for the former Patriot most deserving of hall of fame enshrinement. Fans can vote on www.patriots.com for the next month. Voting will end on May 14, and the Patriots will announce the 2016 Patriots Hall of Fame selection at a later date.

This year’s inductee will become the 25th person to be enshrined into the Patriots Hall of Fame. The Patriots Hall of Fame induction ceremony is held on the NRG Plaza just outside The Hall at Patriot Place presented by Raytheon. The outdoor ceremony is free and open to the public. Patriots fans of all ages are welcome and encouraged to attend. The date and time of this year’s event will be announced at a later date.

Beginning in 2007, the Patriots started a new hall of fame tradition, inducting one player or head coach to The Hall each year. The process for induction involves a panel of media, alumni and staff who collectively nominate the players or head coaches most deserving of induction. After the nominations are made, the committee votes and the top three tallies become that year’s finalists. The Patriots then give their fans the opportunity to vote online to select each year’s winner. The Patriots are the only team in the NFL that allows the fans to make the final selection of each year’s nominees.

The New England Patriots held their annual nomination committee meeting on Wed., April 6, to nominate this year’s candidates for induction into the Patriots Hall of Fame. Now it is up to the fans to select this year’s honoree.

More information on each of this year’s finalists can be found below:

Raymond Clayborn was a three-time Pro Bowl player (1983, 1985, 1986) for the Patriots during a career that extended from 1977 through 1989. He was drafted by the Patriots in the first round (16th overall) out of Texas in 1977 and quickly established himself as one of the game’s best cornerbacks as well as a superb kickoff returner. He finished his career with a franchise-leading 36 interceptions, a record which was tied by Ty Law in 2004 and remains today, 27 years after he retired. His 555 interception return yards are second in franchise history to Law’s 583 return yards. Clayborn also returned 57 kickoffs for 1,538 yards and three touchdowns. As a rookie in 1977, Clayborn returned 28 kickoffs for 869 yards and led the NFL with a 31.0-yard return average and returned three kicks for touchdowns, both of which remain franchise records. He is one of just 19 NFL players since the 1970 merger to finish a season with a better than 30.0-yard average on kickoff returns (min. 20 returns) and is the only Patriots player to accomplish the feat. Clayborn played a vital role in bringing the Patriots to respectability in the late 1970s and early ‘80s. During his 13 seasons with the Patriots, he helped the Patriots to 10 winning seasons, including four postseason berths. Clayborn intercepted Pro Football Hall of Famer Dan Marino and recorded six passes defensed to help end an 18-game losing streak to the Miami Dolphins in the Orange Bowl in a 31-14 AFC Championship victory that propelled the Patriots to their first Super Bowl appearance. Clayborn was a member of the Patriots’ 1970s and 1980s all-decade teams. He also set a franchise record by playing in 161 consecutive games.

Kevin Faulk concluded his 13-year career with the Patriots as one of the most productive players in team history. He filled various roles after joining the team in 1999 as a second-round pick (46th overall) out of Louisiana State. He is the Patriots’ all-time leader in all-purpose yards (12,349) and kickoff return yards (4,098) and is the Patriots’ all-time leading return specialist, totaling 5,041 combined return yards (4,098 kick return yards and 943 punt return yards). He ranks fifth in Patriots history in rushing yards (3,607), fifth in receptions (431), 12th in receiving yards (3,701) and eighth in punt return yards (943). For his career, he played in 161 games and accumulated 3,607 yards rushing on 864 attempts for a 4.2-yard average with 16 touchdowns, caught 431 passes for 3,701 receiving yards and 15 touchdowns, returned 181 kicks for 4,098 yards and two touchdowns and returned 101 punts for 943 yards. Faulk is the Patriots’ all-time leader in receptions by a running back, totaling 431 in his career and is one of just 30 running backs in NFL history to reach the 400-reception plateau. In the 2000s decade, he was one of just six players to rush for more than 3,000 yards and gain over 3,000 yards receiving, joining Tiki Barber, Marshall Faulk, Michael Pittman, LaDanian Tomlinson and Brian Westbrook. Faulk helped the Patriots claim 11 winning seasons, including three Super Bowls titles and five AFC Championships during his 13-year career with New England. Faulk is a member of the Patriots’ all-decade and 50th Anniversary teams as a return specialist.

Mike Vrabel is recognized as one of the best free agent signings in team history. He joined the team prior to the 2001 season, following a four-year career with the Pittsburgh Steelers, where he was used primarily on special teams and as reserve linebacker. During his eight-year tenure in New England, Vrabel played a major role in the Patriots’ dynamic run of three Super Bowls in four years (2001, 2003 and 2004). He exemplified positional versatility, starting at both inside and outside linebacker positions during his Patriots tenure, regularly lining up on offense in short-yardage and goal-line situations and continuing to make valuable contributions on various special teams units throughout his career. As a Patriot, he caught eight regular-season passes, and two more in the playoffs. All 10 receptions were touchdowns, including touchdown receptions in back-to-back, 3-point Super Bowl wins over the Carolina Panthers in Super Bowl XXVIII (32-29) and Philadelphia Eagles (24-21) in Super Bowl XXXIX. In Week 8 of the 2007 season, Vrabel forced three fumbles, had three sacks, recovered an onside kick and scored an offensive touchdown against Washington, all of which earned him AFC Defensive Player of the Week honors. He earned Pro Bowl and NFL All-Pro honors following the 2007 season after registering 12½ sacks and helping the Patriots to the first 16-0 regular season in NFL history. On Dec. 26, 2005, on Monday Night Football, Vrabel became the first player since the official recording of sacks began in 1982 to have two touchdown receptions and a sack in the same game. Vrabel started 110-of-125 games and the Patriots were 95-20 in in those games for a .760 winning percentage. He was a four-time team captain, including the 2006 season in which the defense set a franchise record by allowing just 14.8 points per game and just 237 points, the fewest by the Patriots in a 16-game season. His 48 career sacks with the team are the seventh-most in team history. In 2009, he was voted to the Patriots’ 50th Anniversary Team as an outside linebacker along with Andre Tippett and the 2000s all-decade team along with Willie McGinest, both of whom are Patriots Hall of Famers.

The Hall at Patriot Place presented by Raytheon is the crown jewel of Patriot Place and the only sports and education experience of its kind. Through a dazzling array of interactive multimedia exhibits, artifacts never before viewable by the public and home of the Patriots’ four Lombardi Trophies, The Hall at Patriot Place presented by Raytheon showcases the tradition of the New England Patriots, explores the history of football in New England and promotes math and science education for the thousands of schoolchildren who visit each year. For more information, please visit www.thehallatpatriotplace.com.