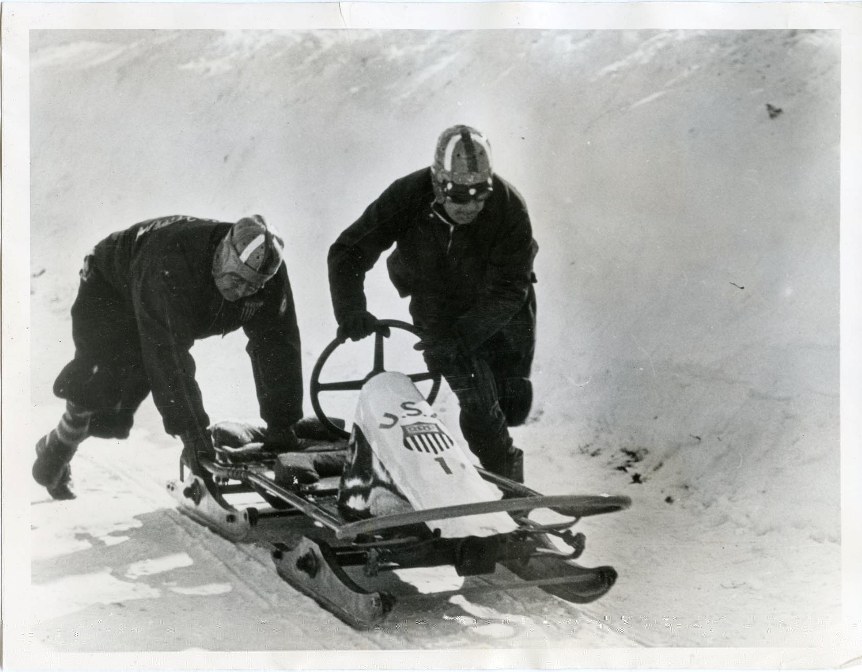 In February 1936 two local boys from Keene Valley, Ivan Brown and Alan “Bob” Washbond, slid into Olympic history and won the gold medal for two-man bobsled at the IV Olympic Winter Games in Garmisch-Partenkirchen, Germany. The dynamic duo began sliding together in the mid 1930’s; Brown was famous for his “leap frog” jump over his brake-man in order to gain more speed, while Washbond was known as the brake-man who never touched the brakes. In an interview after the 1936 Winter Games, Brown attributed his success at the Olympics to his partner’s powerful bobbing and the fact that he refused to wear goggles in any of the event’s four heats. The only goggle-less driver in the field, Brown’s dare devil tactics helped him break all existing world records and outrun the Swiss team by a combined time of 3 seconds. Brown and Washbond slid together for over eight years and again qualified for the 1940 Olympic Winter Games which were to be held in Sapporo, but were cancelled due to the outbreak of World War II.

Earlier this summer the Lake Placid Olympic Museum was fortunate enough to acquire Ivan Brown’s 1936 Olympic gold medal which had been passed down to his daughter, Gail Brown Colangelo. Along with her father’s priceless medal, the museum also received a collection of Ivan Brown’s personal papers. Some of the items include official documents from the 1936 Winter Games, photographs and personal correspondence including letters, postcards and telegrams. One of the greatest delights of working in a museum is having access to the special collections and discovering a unique artifact or document is the greatest thrill of all. Of particular interest are a set of letters Ivan wrote to his wife while he was preparing for the 1936 Olympic Winter Games in Europe. In these heartfelt letters Ivan describes his voyage across the Atlantic, the hardships of training, and the loneliness of being away from home. These letters provide a unique insight to this moment in time and add a personal connection which is not often found in history books. A personal favorite is a letter which Ivan wrote on February 7, 1936, in which he writes about seeing Hitler, practicing on the German track and walking in the Opening Ceremonies:

The Olympics opened yesterday, I hope you heard it. It was very impressive and beautiful, all of the flags of different nations flying in the wind and all of the different uniforms. Adolf Hitler was there and we all saw him. He is a fine looking fellow. He looks much bigger than his picture shows. I drove the run Wed. P.M. with old bender [Washbond] on the brakes. We were the first American sled ever to come down the run and we were on a spot, if our sharp runners had cut the curves all of our sleds would have been banned… On each curve were three Olympic Committee members and people said as Bob and I went by, they ran out and tested and looked very carefully to see if we had hurt the track… I don’t know where they got that about Bob and I winning the Olympic tryouts here as we haven’t had any yet and don’t know whether we are going to compete or not but I hope we do. I love you sweet kid and the quicker I get home to you the better I am going to love it. I dream of you and the baby all the time and sometimes it is almost more than I can bare. But I have got to stick it out now and every day brings me closer to you… Please give my love to all the family and tell them I love and miss them terribly… All of the boys are out at the run and Bob and I stayed in to write to our honeys. This place is full of people… If all of the pictures taken of Bob and I were laid end to end we could walk home… I hope you heard the Opening Ceremony because your boy was marching as proud as a peacock and all for you and him.

I love you Sweet Girl,

Shortly after writing the letter, Ivan Brown and Alan Washbond became the only Americans to bring home Olympic Gold that year. In 1991 both Brown and Washbond were inducted to the Lake Placid Hall of Fame.

For more information about the Lake Placid Olympic Museum and our research facilities, visit our website at: www.lpom.org 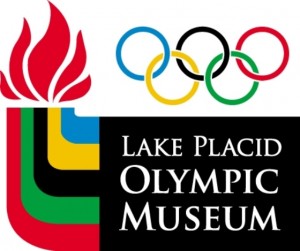