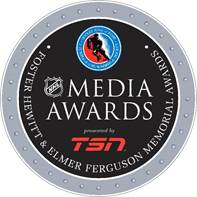 TORONTO (June 1, 2018) –  Mark Spector, President of the Professional Hockey Writers’ Association, and Chuck Kaiton, President of the NHL Broadcasters’ Association, announced today that Larry Brooks will receive the Elmer Ferguson Award for excellence in hockey journalism, and Joe Bowen will receive the Foster Hewitt Memorial Award for outstanding contributions as a hockey broadcaster.

Larry Brooks began his hockey writing career as a beat reporter at the New York Post, covering the New York Islanders and New York Rangers in the 1970s.  His insight caught the attention of the New Jersey Devils, who hired the rising star to serve as the team’s vice president of communications and radio color commentator.  After ten years with the Devils, Brooks rejoined the New York Post and began his current streak of 22 straight seasons covering the Rangers.  Since 1995 Brooks has also been the Post’s national NHL columnist.

“Over the years Larry Brooks became the most important read on one of the NHL’s most important beats, the New York Rangers,” said Spector.  “Beyond his edgy, colorful and on-point coverage of the Rangers, Brooks’ weekly Slap Shots column has become destination copy for readers across the hockey world.”

Joe Bowen began his broadcasting career calling hockey games for his hometown Sudbury Wolves. After a short stint with the American Hockey League’s Nova Scotia Voyageurs, Bowen began a 36-year run as the voice of the Toronto Maple Leafs.  Currently teamed with Jim Ralph on TSN 1050 and Sportsnet The Fan 590, Bowen has described the action for more than 3,000 games to some of the world’s most dedicated hockey fans.  As passionate in the community as he is on the airwaves, Bowen has helped raise hundreds of thousands of dollars for Leukemia research, and was named an ambassador for the city of Sudbury in 2002.  Bowen also received the George Gross Award as Sports Media Canada’s broadcaster of the year in 2013.

The 2018 Hockey Hall of Fame Induction Weekend begins on Friday, November 9, 2018, culminating with the Induction Celebration on Monday, November 12, 2018.  This year’s inductees will be announced on Tuesday, June 26, 2018.

Named in honour of the late Montreal newspaper reporter, the Elmer Ferguson Memorial Award was first presented in 1984 by the Professional Hockey Writers’ Association in recognition of distinguished members of the hockey writing profession whose words have brought honour to journalism and to the game of hockey.

Named in honour of the late “Voice of Hockey” in Canada, the Foster Hewitt Memorial Award was first presented in 1984 by the NHL Broadcasters’ Association in recognition of members of the radio and television industry who have made outstanding contributions to their profession and to the game of hockey.