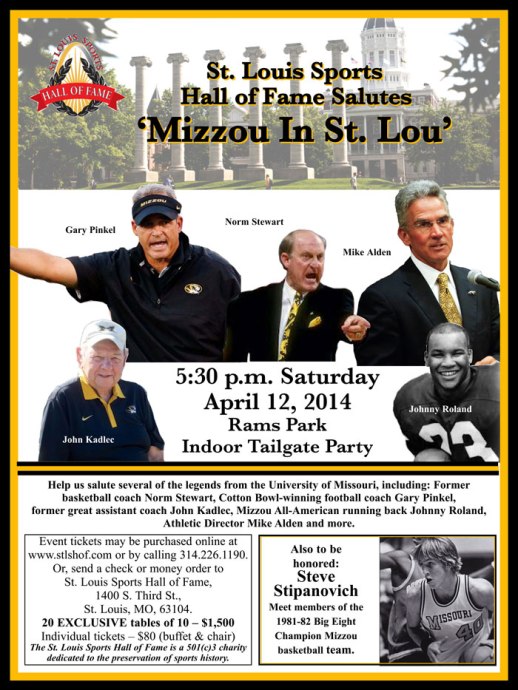 The St. Louis Sports Hall of Fame will host a memorable evening for University of Missouri alums and fans on Saturday, April 12, 2014, at Rams Park in Earth City beginning at 5:30 pm.  Titled “A Salute to Mizzou in St. Lou”, the Hall of Fame will induct three Mizzou sports legends and present major achievement awards.   Three Tigers with storied histories will join the ranks of only 89 others inducted into the St. Louis Sports Hall of Fame.  They are:  Football Player/Coach/Broadcaster since 1947 John Kadlec, 32-year Head Basketball Coach Norm Stewart and former Football All-American running back Johnny Roland.

One rarely given award and one brand new Special Achievement Award will also be presented.  On the heels of an outstanding 12-2 season and Cotton Bowl victory ranked no. 5 in America at season’s end, Coach Gary Pinkel has been selected as only the third recipient in history to win the “Sportsman of the Year Award”.  Coach Pinkel has also become the winningest football coach in Missouri history.  The previous winners of this award are Albert Pujols and Lou Brock of the St. Louis Cardinals.

The “August A. Busch, Jr. Award” has been created by the Busch Family to honor exceptional business leadership and success in sports.  Billy Busch will present the award to Missouri’s Director of Athletics Mike Alden.  In his 16th year at the helm of the program, Alden has initiated dramatic and positive changes to the size and stature of all Mizzou sports and facilities including the move to the Southeastern Conference.

More honors will be doled out, as the Hall pays tribute by handing out the “Champions Award” to the 1981-82 Tiger basketball squad led by All-American center and St. Louisan Steve Stipanovich who will be joined by his teammates to receive awards.  Possibly the best season ever of Tiger basketball, this team went 27-4 overall, 12-2 to win the Big Eight Conference and went to the NCAA Tournament’s Sweet Sixteen before losing by just one point to the University of Houston.

Also receiving the “Champions Award” will be this past season’s Tiger Football Team.  Some members of the squad will be asked to attend and accept the award.

St. Louis Sports Hall of Fame events are recognized for their very entertaining “interview format” as opposed to speeches!  Current and former “Voices of the Tigers” will be handling the interviews, with the Hall of Fame’s Ron Jacober and Greg Marecek hosting the show.

There are two levels of tickets.  Just 20 tables are being sold at $1,500 for 10 seats in an “Exclusive” roped off area in front of the stage, waiter service for the buffet in this area and special parking.  A special commemorative gift will accompany these tickets.

General admission tickets are $80 which includes the Taste of St. Louis buffet, soft drinks, water, beer and a seat for the program.