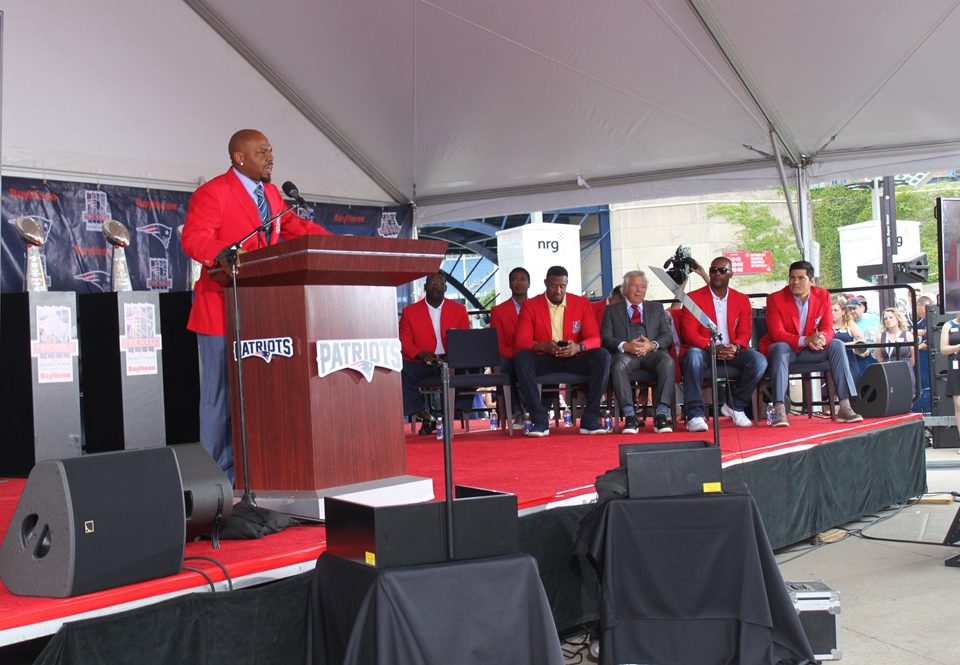 FOXBOROUGH, Mass. – For 13 seasons, Kevin Faulk pranced, darted and bounced around defenders as a running back and kick returner for the New England Patriots. He was a reliable playmaker for three Super Bowl Championship teams and became a tremendous pass blocker in protecting quarterback Tom Brady. On August 1, he took his place among the greatest Patriots of all time when he was inducted into the team’s Hall of Fame after being voted in by the fans.

Back in April, Faulk was in Chicago to announce the team’s second round draft pick. He walked onto the stage that night wearing a No. 12 Brady jersey in support of the Patriots quarterback. On induction day, Brady returned the favor, walking out to the stage in a No. 33 Faulk jersey. 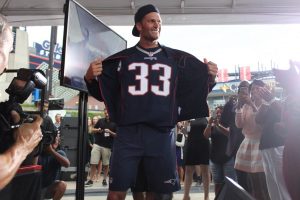 Faulk is the 25th entrant into the Patriots Hall of Fame and joins Troy Brown (2012) and Tedy Bruschi (2013) as the third player to enter The Hall as a career Patriot with three Super Bowl rings. He is also just the fifth player to be selected by the fans into the Patriots Hall of Fame in their first year of eligibility, joining Drew Bledsoe (2011), Brown, Bruschi and Ty Law (2014).

“Kevin Faulk helped deliver three Super Bowl championships and redefined the way an entire generation of Patriots fans celebrated football in New England,” said Patriots Chairman and CEO Robert Kraft. “Despite entering the NFL as the second-leading rusher in SEC history, he arrived in New England without ego or pretense. He was a selfless and tireless contributor to the team, accepting every challenge and excelling in many roles throughout his 13-year career. His work ethic, enthusiasm for the game and clutch performances, especially on third down, earned him the respect of his coaches, teammates and fans alike. For all his contributions and memorable moments on the field, some of my fondest memories were of Kevin’s contributions off the field. He earned our Ron Burton Community Service award in 2009 and often involved his family in his volunteer work, teaching his children the values of giving back.”

Faulk also will be honored with a halftime ceremony at the Patriots’ 2016 home opener against the Miami Dolphins on Sunday, Sept. 18.

For his career, he played in 161 regular season games and accumulated 3,607 yards rushing on 864 attempts for a 4.2-yard average with 16 touchdowns, caught 431 passes for 3,701 receiving yards and 15 touchdowns, returned 181 kicks for 4,098 yards and two touchdowns and returned 101 punts for 943 yards. Faulk is the Patriots’ all-time leader in receptions by a running back and is one of just 30 running backs in NFL history to reach the 400-reception plateau. In the 2000s, he was one of just six players to rush for more than 3,000 yards and gain more than 3,000 yards receiving, joining Tiki Barber, Marshall Faulk, Michael Pittman, LaDanian Tomlinson and Brian Westbrook. During his 13 year career, Faulk helped the Patriots claim 11 winning seasons, including three Super Bowls titles and five AFC Championships. Faulk is a member of the Patriots’ all-decade (2000s) and 50th Anniversary teams as a return specialist.

Beginning in 2007, the Patriots started a new hall of fame tradition, inducting one player or head coach to The Hall each year. The process for induction involves a panel of media, alumni and staff who collectively nominate the players or head coaches most deserving of induction. After the nominations are made, the committee votes and the top three tallies become that year’s finalists. The Patriots then give their fans the opportunity to vote online to make the annual selection. The New England Patriots held their annual nomination committee meeting on April 6 to select this year’s Patriots Hall of Fame candidates. The finalists were (listed in alphabetical order) cornerback Raymond Clayborn, Faulk and linebacker Mike Vrabel.

The Patriots Hall of Fame was officially formed in 1991 after John Hannah became the first Patriots player to be inducted into the Pro Football Hall of Fame. With the Hall of Fame, the Patriots created a new way of honoring their greatest players.  The Hall at Patriot Place presented by Raytheon officially opened in 2008, giving Patriots players, past and present, a place where there legacies can be preserved for generations to come. Enshrinement into The Hall is an honor befitting of the franchise’s greatest players and contributors, with 30-foot video pylons displaying each inductee. Beginning in 2007, fans became part of the hall of fame tradition and active participants in the selection process.

This year’s inductee will join other Patriots greats and two contributors as a member of the New England Patriots’ Hall of Fame (listed in alphabetical order below with year of induction):

ABOUT THE HALL AT PATRIOT PLACE PRESENTED BY RAYTHEON

The Hall at Patriot Place presented by Raytheon is the crown jewel of Patriot Place and the only sports and education experience of its kind. Through a dazzling array of interactive multimedia exhibits and artifacts never before viewable by the public, The Hall showcases the tradition of the New England Patriots, explores the history of football in New England and promotes math and science education for thousands of schoolchildren each year. The Hall’s signature exhibit and premier photo opportunity is The Super Bowl Experience. Visitors can re-live each of the team’s four Super Bowl championships, view each of the team’s Vince Lombardi Trophies and Super Bowl championship rings and re-enact Malcolm Butler’s Super Bowl XLIX game-clinching interception. For more information or to purchase tickets, please visit www.TheHallatPatriotPlace.com, find “The Hall at Patriot Place presented by Raytheon” on Facebook or follow @TheHall on Twitter.