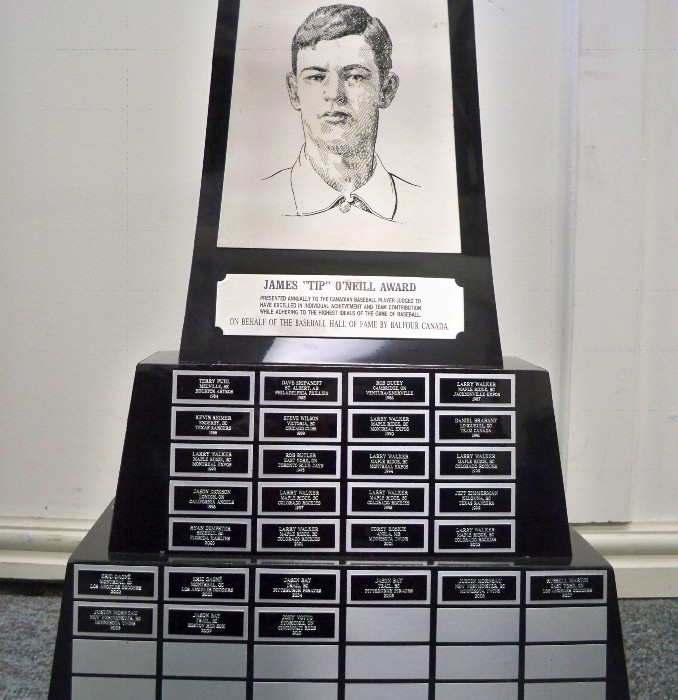 The St. Marys, Ont.-based shrine presents this honour annually to the Canadian player judged to have excelled in individual achievement and team contribution while adhering to baseball’s highest ideals.

To determine the winner, the Hall takes into account a number of criteria, including each candidate’s on-the-field performance, contributions to their team, community and charitable endeavors and support in fan voting. Starting on November 18, the Hall had encouraged fans to vote for their top three candidates and they responded by casting their votes via e-mail and on the Hall’s website.

“Justin Morneau represents everything you want in an ambassador for the game of baseball and for the sport in our country,” said Scott Crawford, the Hall’s director of operations. “Yes, he’s a batting champion and a Gold Glove finalist on the field, but he’s also a passionate supporter of the national program and he quietly and selflessly supports a long list of charities. We’re proud to present this award to such a great all-around player and humanitarian.”

After 10 successful seasons with the Minnesota Twins and a little over a month with the Pittsburgh Pirates, Morneau signed with the Rockies and enjoyed an outstanding comeback season. The left-handed hitting first baseman, who won the American League MVP Award in 2006, secured his first batting title (.319) in 2014. In doing so, he became only the third Canadian (along with Walker and Tip O’Neill) to accomplish that feat.

A participant in this year’s Home Run Derby at the all-star game, Morneau led Canadian big leaguers in most offensive categories and was second amongst National League first basemen in slugging percentage (.496) and on-base plus slugging percentage (.860). His offensive output catapulted him into second place amongst Canadians in several all-time offensive categories, including hits, RBI, doubles and total bases.

On top of his offensive accomplishments, Morneau was a Gold Glove finalist, a NL Comeback Player of the Year nominee and he finished 24th in NL MVP voting. He was also selected to suit up for a post-season all-star team that travelled to Japan.

Off the field, Morneau and his wife, Krista, are active in numerous charities. For the past six years, they have organized a Casino Night to raise money for the Arthritis Foundation, a cause that’s close to Morneau’s heart because his niece, Madelyn, suffers from juvenile rheumatoid arthritis. Also in recent years, the couple has spearheaded the Winter Warm-Up Coat Drive for the Salvation Army in Minneapolis. Last year, they collected over 1,500 coats for people in need.

The New Westminster Firefighters’ Charitable Society, the Starkey Hearing Foundation and the Ronald McDonald House are among the other charities that Morneau has supported in recent years. For his humanitarian efforts, he has been nominated for Major League Baseball’s Roberto Clemente Award three times (2010, 2012, 2013).

“I would like to start by saying thank you for being named the winner of the 2014 Tip O’Neill Award. With the high quality of Canadian baseball and softball players that now hail from Canada, it is truly one of the great honours of my career,” said Morneau. “To be mentioned amongst the great Canadian players in 2014, and to ultimately win the Tip O’Neill award is very special. When you look at the list of past winners, it is truly humbling to be listed with them again. I would also like to thank the Canadian Baseball Hall of Fame for not only this award, but also for doing such a great job of promoting and developing the game of baseball in Canada.”

Morneau will be presented with the award in a ceremony at a Rockies home game during the 2015 season.

The Hall’s Tip O’Neill Award is named after Woodstock, Ont., native James “Tip” O’Neill, who was one of Major League Baseball’s first legitimate stars. With the American Association’s St. Louis Browns in 1887, O’Neill set big league records in hits, doubles, slugging percentage and total bases, while compiling a .492 batting average. Walks were counted as hits in 1887, but if O’Neill’s average was calculated by today’s standards, it would be .435, the second highest in big league history to Hugh Duffy who hit .440 in 1894.

Past winners of the James “Tip” O’Neill Award: