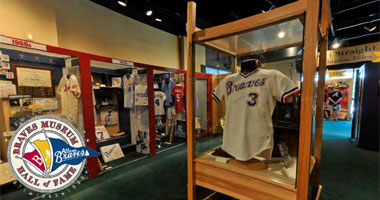 “We are happy to welcome these three very deserving individuals into the Braves Hall of Fame,” said Atlanta Braves President John Schuerholz.  “This group represents the Braves organization from each city where we have played and are an integral part of our very rich history.”

Lopez played for the Atlanta Braves from 1992-2003.   He shared catching duties for four seasons before establishing himself as the Braves regular catcher in 1996.  That same season, he helped lead the Braves in capturing the National League Championship Series, while earning the series Most Valuable Player award.  He also made the National League All-Star team three times, 1997-98 and 2003.  Javy had his best season in 2003 with a .328 batting average, 43 home runs and 109 RBI in 129 games. He won the Silver Slugger Award and finished fifth in the National League MVP voting.  In that same season he broke the record for the most home runs hit in a season by a catcher (41).  Lopez also caught Kent Mercker’s no-hitter on April 8, 1994. Currently, Javy ranks eighth in home runs (214) in Braves franchise history, and 5th in hits (1,148) and RBI (694) in Atlanta history.

Rabbit (Walter James Vincent) Maranville played shortstop for the Boston Braves for all or parts of 15 seasons, from 1912-20, 29-33, and 35.  Knicknamed “Rabbit” for his speed and small stature (5’5” and 155 lbs), Maranville was also known as one of “baseball’s most famous clowns” due to his practical jokes and lack of inhibitions.  Rabbit finished third in the MVP voting in his first full season (1913) and runner-up in the MVP voting to teammate Johnny Evers in 1914 when the Braves swept the Philadelphia A’s in the World Series.  Rabbit currently ranks 1st in triples (103), 5th in games played (1,795), and 9th in stolen bases (194) in Braves franchise history and was inducted into the National Baseball Hall of Fame in 1954.

Tickets to the luncheon and induction ceremony can be purchased by calling the Braves Museum & Hall of Fame at 404-614-2310.  Individual tickets are $150 and include the chance to sit with a current or former player, manager, coach or Braves Hall of Famer.

The Braves Museum & Hall of Fame is the starting point of Turner Field tours, and features more than 700 Braves artifacts and photographs that trace the team’s history from its beginnings in Boston (1871-1952) to Milwaukee (1953-65) to Atlanta (1966-present).  Guided tours take visitors to many areas off limits during games, including the Braves press box, broadcast booth.