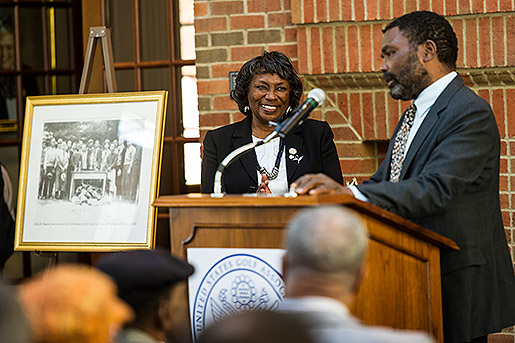 FAR HILLS, N.J. – Pamela Green, the president of Wake-Robin Golf Club near Washington, D.C., the oldest African-American women’s golf club in the country, summed up the struggle to achieve equality in terms any golfer could appreciate: “We’ve played a mighty long par five.”

Green was one of many speakers who talked about overcoming adversity to play the game she loves during the African-American Golf History Symposium on Feb. 22. The event took place in conjunction with the opening of the USGA Museum’s newest exhibit, “More Than a Game,” which celebrates the historical importance of African-American golf clubs and their contributions to the expansion and development of golf in the United States. Through presentations by representatives of these pioneer clubs as well as a panel discussion with former players, the symposium demonstrated how these clubs helped break down racial barriers through golf.

The event began with presentations by Renee and Larry Powell, the children of the late William “Bill” Powell, the visionary behind Clearview Golf Club in East Canton, Ohio. Clearview, founded by Powell in 1946, is the only public golf course in the United States designed, built, owned and managed by an African American, and his children continue Powell’s legacy of leadership by sharing the gift of golf with everyone, regardless of race or ethnicity. A short film by Moxie Pictures, which is also featured in the exhibit, illuminates the courage and dedication displayed by Powell and his family.

Larry, now Clearview’s superintendent, grew up working on the golf course alongside his father and discussed the challenges of keeping a golf course in impeccable condition. Renee, a longtime LPGA Tour player who is now the head professional at Clearview, stressed the symposium’s role in ensuring that “everybody knows what the history of all golf is about, not just one color of golf.”

Individuals representing other trailblazing clubs echoed Renee’s words in their presentations. Author and historian Dr. Larry Hogan, an authority on the former Shady Rest Golf and Country Club in Scotch Plains, N.J., along with a trio of people affiliated with Langston Golf Course in Washington, D.C. – PGA professional and general manager Louis Tate; Green of the Wake-Robin Golf Club; and David Ross of Royal Golf Club – described the emergence of courses specifically for African Americans as “a place for us.”

As with many elements of desegregation, the challenges black golfers faced were not overcome simply by a change in law. At Langston, although blacks were allowed to play beginning in 1946, the club could not afford the security needed to protect them from potential violence.

Drawing 200 attendees, including a large contingent of students from the University of Maryland-Eastern Shore, the only historically black college in the United States to offer a PGA golf management program, the question-and-answer segment provided lively interaction between the speakers and audience. Humorous anecdotes about the role golf played in their early lives, such as stories told by Madelyn Turner, an accomplished junior player in the 1960s, were coupled with more somber reflections on the discrimination players faced at hotels, restaurants and country clubs when they traveled to tournaments. Renee Powell, the second African American to compete on the LPGA Tour after Althea Gibson, recounted that she was often assumed to be an employee rather than a competitor. She was sometimes asked, “Are you here to work?” to which she responded, “I said yes, I’m here to play golf.” However, a sentiment echoed by all was that their love of the game was never affected by the bitterness they encountered.

Former PGA Tour players Bill Bishop and Calvin Peete stressed the importance of getting the next generation involved in golf. Finding golf at age 23, Peete’s relentless practice on a local softball field, sometimes in the middle of the night, allowed him to become an outstanding ball-striker who later finished first in the PGA Tour’s driving-accuracy category every year from 1981 to 1990. Peete recalled the night that a neighbor called the police during one of his 2 a.m. practice sessions. They showed up and watched him, occasionally calling out, “Nice shot, Calvin!”

Bishop, who was initially prevented from turning pro due to The PGA of America’s Caucasian-only clause, emphasized giving back to the next generation: “Once you reach your goal, try and help someone reach their goal.” His work with aspiring young players at Freeway Golf Course in Sicklerville, N.J., the first predominantly black-owned and operated 18-hole championship course in the country, furthers the panel’s shared goal of exposing youngsters to the game that changed their lives.

The symposium and exhibit are part of the USGA’s ongoing commitment to making golf more accessible while providing a platform for stories that are critical to the development of the game and the preservation of a more complete history of golf.  Following the symposium, attendees mingled with the speakers in the USGA Museum as they viewed the new exhibit.

“More Than a Game” will be on display for two years, and the public is invited to visit the USGA Museum between 10 a.m. and 5 p.m., Tuesday through Sunday. For more information, visit www.usgamuseum.com.