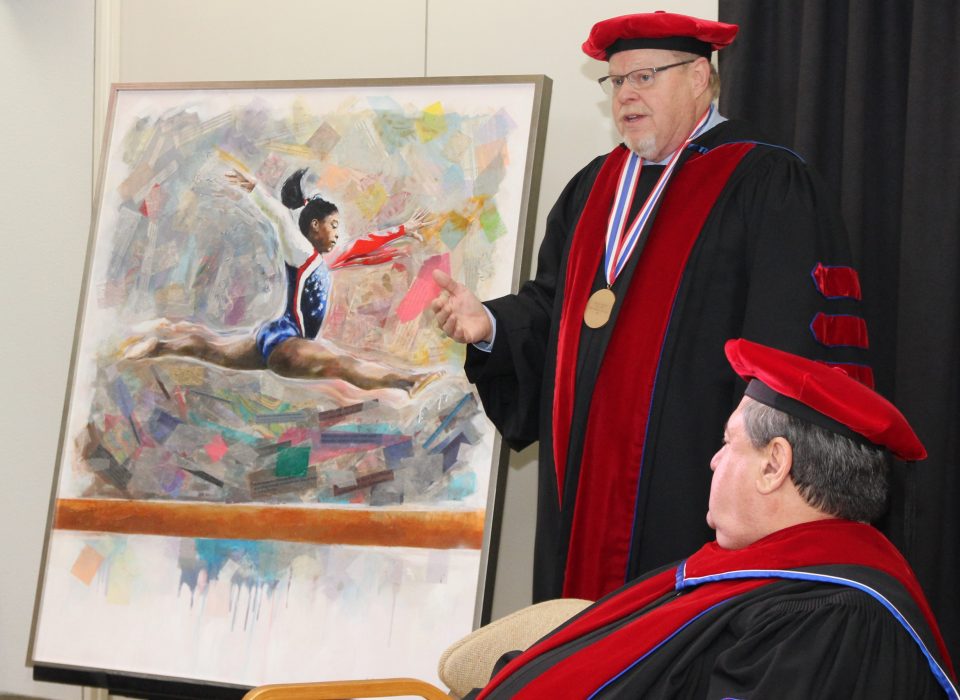 DAPHNE, Ala. – After four decades of leadership in the commercial creative field, Atlanta’s Steven Lester fully embraced his passion for painting and quickly gained notoriety for what he calls “representational expressionism.” Because Lester’s action sports themes resonate with vibrant life and elicit a visceral, emotional response, he was named the United States Sports Academy’s 2019 Sport Artist of the Year.

Lester received the 2019 Sport Artist of the Year – Dr. Znenliang He Culture Award from Academy President Dr. T.J. Rosandich and unveiled an original painting of American gymnast Simone Biles at the Academy’s 35th annual Awards of Sport program in Daphne, Ala. The painting, called “Courage to Soar,” depicts Biles performing on the balance beam at the 2016 Summer Olympics in Rio de Janeiro, Brazil. The piece is now on permanent display at the Academy’s American Sport Art Museum & Archives (ASAMA) on its campus. Numerous other works by Lester are also on temporary display in the museum.

Growing up in Atlanta, Lester loved drawing, painting and playing sports. He played baseball through college and achieved a black belt in two forms of martial arts. After graduating from Georgia State University with a degree in Visual Arts, he began his career as a commercial illustrator with an emphasis on sports. He produced a series of Gameday program covers for Georgia Tech University, and his skills landed him a role as the Creative Director of Turner Broadcasting System. After getting a taste for television, Lester ultimately became a Vice President and Creative Director for two international advertising agencies, where he won more than 100 national and international awards.

Even though Lester achieved commercial success, he never lost sight of his lifelong ambition of becoming a full-time sports artist. Upon retiring from leadership in the advertising field, Lester shifted his focus to his love of painting. His dynamic, narrative subjects are both contemporary and imminently relatable. His work is in demand by major corporations, universities, art collectors, athletes and private individuals who appreciate his unique style and approach.

He was selected as one of only 16 artists in America to be a 2019 Fellow in the Clark Hulings Fund’s Art-Business Accelerator Program.

Lester has been invited to stage several live painting events at the 2020 Summer Olympics in Tokyo, Japan.

The Academy’s Awards of Sport honor those who have made significant contributions to sport in categories as diverse as the artist and the athlete. The Academy’s American Sport Art Museum and Archives (ASAMA) annually recognizes these men and women through its Sport Artist of the Year, Honorary Doctorates, Medallion Series, Athletes of the Year and Alumni of the Year awards.

Founded in 1984, ASAMA is dedicated to the preservation of sports art, history, and literature. The ASAMA collection is composed of more than 1,800 works of sport art across a variety of media, including paintings, sculptures, assemblages, prints and photographs. The museum is open free to the public from 9 a.m. to 4 p.m. weekdays. For more information, go to www.asama.org.

The United States Sports Academy is an independent, non-profit, accredited, special mission sports university created to serve the nation and world with programs in instruction, research and service. The role of the Academy is to prepare men and women for careers in the profession of sports. 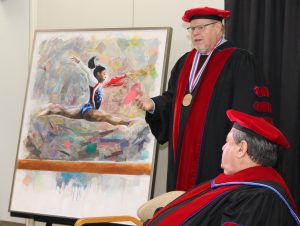 United States Sports Academy 2019 Sport Artist of the Year Steven Lester discusses his original painting “Courage to Soar” at the institution’s 35th annual Awards of Sport program in Daphne, Ala. The piece is on permanent display at the Academy’s American Sport Art Museum & Archives.