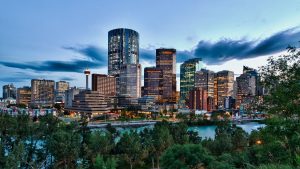 The 2016 Annual ISHA Conference is a three-day event filled with learning and networking opportunities for the sports heritage world. This 46th edition of the event, “Museums Embracing Emerging Technologies”, focuses on innovation and interactivity in the museum experience, and will be hosted by Canada’s Sports Hall of Fame, in Calgary, AB. From September 26 through 28, expert speaker sessions will bring participants up-to-date on topics such as virtual learning and content, visitor experience data, mobile marketing and virtual reality, exhibit architecture, and online collections. Delegates will also take part in social events, including an evening of cocktails and dinner at The Military Museums. 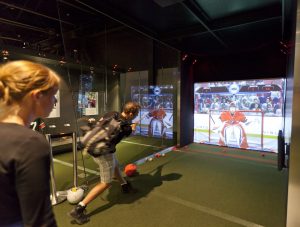 The 2016 ISHA Annual Conference is a great way to enjoy the benefits of your membership.

Post conference, delegates have the option to tour the beautiful mountain town of Banff and experience the Canadian Rockies. The tour fee is $40 USD. 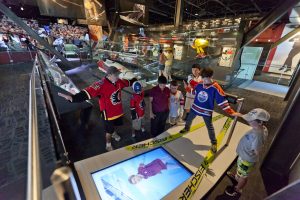 Canada’s Sports Hall of Fame is an international award-winning facility with over 40,000 square feet of inspiring experiences. Located at WinSport’s Canada Olympic Park, site of the 1988 Olympic Winter Games in Calgary, it features 12 interactive galleries and a vast artifact collection. With 52 hands-on interactive exhibits like shadow boxing, wheelchair racing, rowing and 3D hockey, there’s something fun, educational and inspiring for everyone. It is a place of honour for the 605 inducted sport legends and the 65 sports they represent. Our mission is to share the stories of our inducted Honoured Members so that we can inspire all Canadians to be the best they can be in all aspects of life.

Ron was born May 29, 1961, to Clarence and Lillian [Gerwing], Muenster, Saskatchewan.  He, his 2 brothers and 1 sister, were raised on the family farm 3 miles north of Marysburg. Ron’s father, Clarence and his Uncle Ray both played for the Marysburg Royals Senior Baseball team, as so would Dave, Ron and Murray as well as their sons.

Ron’s baseball career began at Pee Wee age, playing minor ball with the Muenster Red Sox. He pitched his first senior game in 1976 at the age of 15, for the Marysburg Royals, and from then on played senior baseball until he retired in 2002. In 1978 Ron was a member of the Humboldt Provincial Midget Champions, winning the MVP Award. He also competed in a National Junior Championship with the North Battleford Juniors in 1980. Ron’s passion for the game and his fierce competitive spirit fueled him to be one of the best all round ball players in the 1980’s and 1990’s, being recognized as one of the top lefties in the province, but, he could do it all. He was approached to play college baseball in the United States, but stayed home to carry on with the family farm. Ron was a member of the Marysburg Royals for more than 25 years. During that time, the team won 16 league championships and were pennant winners 15 times. As well, the team travelled and competed in tournaments across the province  and beyond Saskatchewan borders, with the fondest memories of a tournament in St. Lazare, Manitoba, when they played against a semi-pro team from California. When the Royals were not successful in qualifying for Provincial play offs, Ron was picked up by other teams for these Provincial tournaments. He played in 4 Senior AAA National Championships. Once with Swift Current and Kindersley and twice with Weyburn Beavers, winning Nationals in 1996. Ron pitched the final game that year against the team from Ottawa and was credited with the win. Ron was also picked up many times in AA Provincials.  He also was picked up by teams including Regina Canadiens, Regina Capitals, Fulda Flyers and Wilkie Brewers in Western Championships. Following his playing days, Ron coached his teams to many provincial tournaments. He coached the 2005 Muenster Red Sox Pee Wee Provincial Champions. He coached the 2010 Saskatoon Giants Midget AAA’s, advancing them to the Nationals in London, Ontario.  Twice Ron coached the Zone 5 Bantam Selects in the Saskatchewan Summer Games. While playing in the North Central Baseball League, Ron was the recipient of the 1981 NCBL  Most Valuable Player Award. He was the NCBL Batting Champ in 1981 [.463]; 1990 [.538]; 1997 [.500]; 1999 [.605]; 2000 [.507]. He was the Homerun King in 1983 with 6; 1987 with 8; 1990 with 11; 1992 with 7, and 1999 with 9.

Ron and his wife Joy live on the Bauml farm. Baseball has always been a love of Ron’s, providing many friends and countless memories. He believes that all accomplishments and statistics aside, through the years, he has learned that no one remembers your batting average or awards but teammates will remember you for your passion and love of the game.

He passed this love of the game onto his children with their oldest son Braden selected to work with the Team Canada Juniors in Orlanda, Florida, after the Canada Cup in 2006. Cole, their youngest son, played in the Canada Cup in 2009, then played in a Junior College in Trinidad, Colorado for 2 years. He then transferred to Northern Kentucky University, then drafted by the Detroit Tigers in 2015. Ron’s comments, ”These have definitely been the biggest baseball highlights in my life so far.”