Start thinking of items that you can donate to the ISHA Founder’s Fund Silent Auction to be held in conjunction with the ISHA Conference hosted by the 49ers Museum on September 26-28.

We are asking for all items to have a minimum $50 retail value.  If you have any questions or something that could be added to a package, please email Dana Hart at [email protected]

The Chicago Cubs wanted to showcase their history and give their visitors some interactive surprises when visiting their offices at Wrigley Field.  The project team at Xibitz, Inc. worked with the architects/designers to collaborate and fabricate an interactive graphic wall, reminiscent of the “train schedule” moving signs in Penn Station, NYC and the 30th Street Station in Philadelphia.   In addition, Xibitz created showcases, video arrays and other environmental graphics for a totally engaging environment that makes any visit to the Cubs Front Office a memorable experience. 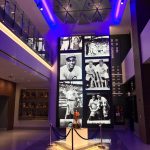 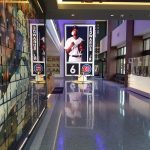 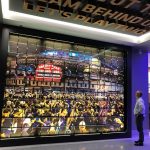 “Deserving and dynamic are two words that come to mind when I think of the accomplished men and woman that comprise the Class of 2019,” Watson said. “This group has won hundreds of races and dozens of championships in competition and the hearts and adoration of millions of race fans both at and away from the track.”

The Class of 2019 will be enshrined into the Motorsports Hall of Fame of America in its 31st annual induction ceremony next March, the traditional black-tie gala that will be the crowning event of a two-day, multifunction MSHFA induction celebration on March 11-12 in Daytona Beach.

After traditionally holding its annual induction in the summer for decades, the MSHFA returns to the spring date in 2019 for the second consecutive year. The date shift puts the MSHFA induction amid a mass of March motorsports and automotive activity in Florida. The IndyCar Grand Prix of St. Petersburg, the Amelia Island Concours d’Elegance, the NHRA Gatornationals in Gainesville, the IMSA 12 Hours of Sebring, plus the AMA Daytona SuperCross, Flat Track TT and DAYTONA 200, as well as Bike Week in Daytona Beach, all take place in a 10-day period that now includes the MSHFA induction.

“Moving to March places our annual induction ceremony right in the middle of one of the most diverse and busy times for motorsports and automotive events all year in Florida,” Watson said. “The initial date switch earlier this year was very well-received, and we look forward to building on the success.”

With the host venue expected to be finalized in the coming weeks, the 2019 MSHFA Induction Ceremony will be preceded on March 11 by the traditional “Heroes of Horsepower” reception and strolling dinner at the MSHFA Museum, located in the Daytona International Speedway Ticket and Tours facility.

Augie Duesenberg (Historic) – August Samuel Duesenberg, with inductee brother Frederick Duesenberg (MSHFA Class of 1997), built some of the greatest racing cars of their generation. With Fred as the designer and Augie handling the manufacturing, they built some of the last “hand-made” race cars that dominated the Indianapolis 500 in the mid-1920s. Augie also served as crew chief for the brothers’ Duesenberg racing team. As engine builders for cars, boats and aircraft, their motors appeared in many race-winning vehicles including those driven by three Indianapolis 500 champions (1924, ’25, ’27).

Dario Franchitti (Open Wheel) – From 2007-2012, Dario Franchitti was as good as any driver in open wheel racing history, winning four championships and three Indianapolis 500s – 2007, 2010 and 2012 – in six seasons, which includes the year he took off (2008) to try his hand at NASCAR. Born in Scotland, Franchitti came to the U.S. in 1997 and the following year he won three races and a season-best five poles with Team Green. He began his string of Indy 500 victories and championships in his final year with Andretti Autosport (2007) and continued the run to two more Brickyard victories with Chip Ganassi (MSHFA Class of 2016).

Phil Remington (Sports Cars) – Wherever Phil Remington went, wins and championships followed. The WWII flight engineer was one of the most successful chief engineers in sports car racing history. As chief engineer at Shelby-American, they captured the 1965 World Manufacturers Championship and built the Ford GTs that became in 1966 and 1967 the first American cars to win Le Mans. Next, “Rem” helped Holman and Moody win the 1968 Daytona 500. Later that year he joined Dan Gurney’s All American Racers, where over the next 40-plus years he was central to the team’s success in everything from the Indianapolis 500 to sports car racing.

Don Schumacher (Drag Racing) – Don Schumacher’s first career in drag racing was impressive but his second has made him one of the all-time greats. As a Funny Car pilot, “The Shoe” won the 1972 Coca-Cola Cavalcade of Stars, 1973 AHRA World Championship, five NHRA national events and about 70 percent of his 560 match races. He retired from driving to devote more time to his business and family. Since his return more than a decade later, Don Schumacher Racing has amassed 16 NHRA world championships through 2017, including son Tony’s eight titles, and more than 300 wins. DSR was the first team to win Top Fuel and Funny Car titles in the same year, which it has done four times.

Kevin Schwantz (Motorcycles) – Kevin Schwantz started riding at four, became a top motocross rider in his teens, then switched to road racing, where he became a Daytona 200 winner, 500cc World Champion and 25-time victor on the international Grand Prix circuit. He finished second to Eddie Lawson (MSHFA Class of 2002) in the 1986 Daytona 200, and the following year began his epic rivalry with Wayne Rainey (MSHFA Class of 2008). Rainey took the 1987 title, but runner-up Schwantz won five of the six last races, then followed with a victory in the 1988 Daytona 200. His world championship came in 1993 and in 125 GP starts, Schwantz prevailed 25 times, the second American all-time behind Lawson. The FIM later retired his No. 34.

Tony Stewart (Stock Cars) – Where there’s Smoke, there are victories and championships for Tony Stewart, both as a driver and more recently as a team owner. Few modern drivers come close to his versatility, speed and quiet assistance to racers in need. The only person to win championships in IndyCar (1997) and NASCAR (2002, 2005, 2011), Stewart also won the 1994 USAC National Midget Series, 1995 USAC Triple Crown and 2006 IROC titles. His 2011 Cup crown was the first by an owner-driver since Motorsports Hall of Fame of America Inductee Alan Kulwicki (MSHFA Class of 2010). As an owner, he has won an additional Monster Energy Series championship with Kevin Harvick (2014), the 2017 Daytona 500 with Kurt Busch, and his four-car team has been a dominant force so far in the 2018 Monster Energy Series.

Linda Vaughn (At Large) – The “First Lady of Motorsports” transformed the role of beauty queen into an enduring ambassadorship. It’s hard to imagine anyone more beloved by fans and racers alike in the history of the sport. The Dalton, Georgia native carved her own niche after winning the Miss Atlanta Raceway title in 1961 and Miss Pure Firebird immediately thereafter. Best known for her long association with Hurst Industries, where she became “Miss Hurst Golden Shifter” after besting 200 contestants for the title. Vaughn appeared in the motorsports-oriented films Gumball Rally (1976), Burnout (1979) and Stroker Ace (1983). Already recognized by the MSHFA, she was presented with the Bob Russo Heritage Award in 2004. Her eponymous autobiography was published in 2016.

Seventy years ago, stock car racers took to the Daytona Beach-Road Course to make a historic run: the first race of NASCAR’s inaugural season. That year, 1948, proved to be a defining one for the sport, foreshadowing both the accomplishments and the adversity the organization would face in the decades to come.

In celebration of this landmark anniversary, the NASCAR Hall of Fame’s temporary exhibit “1948: Proving Grounds” delves deeper than ever before into this inaugural season’s significance to American and motorsports history. Return to a time of dirt tracks and prewar coupes, when drivers, track operators, and those who led NASCAR were redefining motorsports creating what would become America’s longest-running auto racing sanctioning body.

Rare artifacts (some of the Hall of Fame’s oldest) are featured alongside cars from the era. Throughout the exhibit, straight-from-the-track stories of daring and grit transport guests to the 1940s, inviting them to experience firsthand the thrill of the race.

“1948: Proving Grounds” exhibit included with admission to the NASCAR Hall of Fame.