The recipient of the this year’s award is John Magnusson, who umpired postseason college baseball for 23 consecutive years from 1984 to 2006. He worked a total of six College World Series at three different levels and along the way served in the evaluation, training and scheduling of umpires for 26 years in Florida.

“John’s career speaks for itself,” said Mike Gustafson, president and CEO of the National College Baseball Hall of Fame. “His peers recognized his on-field excellence as well as his professional contributions to umpiring, and that speaks volumes.”

Magnusson’s selection was the result of a nomination and screening process by past and current NCAA national coordinators of umpires, NCAA regional advisers, conference umpire coordinators and four collegiate head coaches.

“To be included in this group, and especially the umpires that precede me, gave me a rush of emotions,” Magnusson said. “When I was notified, I was on the way to my home town of Kissimmee, (Fla.) where my love of baseball was fostered. I visited the site of my first game as an umpire at Oak Street Park 49 years ago. I kept thinking of all my family that allowed me to pursue such a dream.”

Magnusson will be honored as part of the Hall of Fame’s annual Night of Champions on June 29 in Lubbock, Texas.

WILLIAMSPORT, Pa. — The International Sports Heritage Association’s (ISHA) board of directors has voted for the second straight year to expand the grant programs offered to its membership.

ISHA members will now have the opportunity to apply for seven different grants to receive assistance attending the annual conference and for special projects.

The organization will award up to three conference grants that can be worth as much as $1,000 each. There will be a fourth grant opportunity worth up to $2,000 that will be available to a member institution located outside of North America. Those grants are designed to offer financial assistance for a member to attend the annual conference, which this year will be held October 21-23 in Williamsport, Pa. — home of the World of Little League Museum. ISHA will also award two conference registration grants (covering the conference registration fee only) for emerging sports heritage professionals.

With over 30 projects completed at universities across the nation, exhibit fabrication firm 1220 Exhibits has found a niche in higher education, fabricating halls of fame and activating brands throughout campus. Most recently, 1220 completed updates to the Wally Pontiff Jr. Hall of Fame for Louisiana State University’s baseball team, fabricating two display cases showcasing jerseys of the most recent former Tigers making headlines in Major League Baseball. The 2008 SEC Championship trophy was replaced with the 2013 SEC Championship trophy, a 2014 plaque was added to the History wall along with an NCAA plaque to the Tiger Tradition case. 1220 fabricated exhibits for the Hall of Fame’s opening in 2013 has become a long-term partner, providing updates in 2014 and 2015.

In addition to creating the opening exhibits for the Highers Athletic Complex at Baylor University in 2008, 1220 has been a trusted resource to provide yearly updates and additions to the exhibitions with the 2015 updates including adding recent bowl victories, academic All Americans and installing All America plaques.

With over 100,000 square feet of production facility in Nashville, TN, 1220 provides breakthrough solutions for the fabrication and installation of exhibits, events and experiences. Past clients range from history museums and nature centers, to sports and music halls of fame. For more information on how 1220 can make your vision a reality, contact (615) 333-1220 or visit www.1220.com. 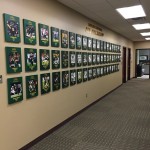 The successful completion of a few projects for Hall of Fame Museums in Canada brought Zone Display Cases to join the Association (ISHA). The Wayne Gretzky Sports Hall of Recognition in Brantford, Ontario, is their most recent completed project.

The Wayne Gretzky Sports Centre is the hub for sporting activities in Brantford and surrounding areas and it is only fitting that is the location of the NEW Brantford & Area Sports Hall of Recognition.   Numerous Olympic, National and International athletes have called Brantford and surrounding communities home.  The Sports Hall recognizes hometown heroes, including the Great One, Wayne Gretzky who changed the face of hockey.

The new Sports Hall is an exciting new tourist attraction featuring display cases, memorabilia, interactive trivia game, and mini-theatre to honour Wayne Gretzky and the many accomplished athletes in the Brantford area now and for years to come.

Find more about Zone Display Cases and what they do at: www.zonedisplaycases.com

Find more about the Wayne Gretzky Sports Hall of Recognition at: http://www.waynegretzkysportscentre.ca/AboutUs/SportsHallofRecognition.aspx

LAKE PLACID, N.Y. –  The Lake Placid Olympic Museum recently rediscovered a scrapbook dating from the 1910’s to the 1920’s, created by Henry Uihlein II, in its archives while undergoing an inventory of the collections.  This treasure reveals a new story of how Lake Placid became a mecca for winter sports and has recently been digitized and uploaded to the New York Heritage Digital Collections website (http://newyorkheritage.org/), where it is now able to be browsed in its entirety.

The album is a unique collection of beautiful black and white photographs, articles, and objects relating to speed skating around Lake Placid and Saranac Lake.  When Museum staff first looked through the scrapbook, they were amazed to learn that largely through Henry Uihlein’s efforts, Lake Placid gained world-wide recognition when he brought the village’s first International event in 1920; when they hosted the International Outdoor Speed Skating Championships.

Museum Director, Alison Haas, stated, “As you flip through the pages of the book, it becomes evident that Henry Uihlein, a businessman, had a passion for speed skating and was a proud supporter of Lake Placid’s area youth, including skater, Charles Jewtraw, the 1924 Olympic champion.  History always gives credit to Godfrey Dewey, President of the 1932 Olympic Winter Games, but Henry should no longer be overlooked and is equally important to our story.”

Funded by the Henry Uihlein II and Mildred A. Uihlein Foundation, staff at the Lake Placid Olympic Museum along with the Northern New York Library Network worked together to digitize the scrapbook to help preserve the contents found inside.  The scrapbook provides a unique record of Lake Placid’s history and museum staff is in the beginning stage of planning an exhibit to be installed in the spring of 2016.  The exhibit will feature content found within the scrapbook and focus on the hard work and dedication of Lake Placid’s winter sports pioneers and speed skating.

If you would like to learn more about this project and the stories of speed skating in Lake Placid, please visit the Lake Placid Olympic Museum on Main Street.  The museum is open daily from 10 a.m. to 5 p.m.

Recently the Hockey Hall of Fame called upon fans to help come up with a name for the newest addition to the HHOF family and the response was overwhelming! Over 2,300 creative submissions were received from all over North America.

Judging took place by a panel of Hockey Hall of Fame staff who thoroughly reviewed each entry. After much deliberation, the panel narrowed it down to a name that received over 70 submissions, thus resulting in a random draw.

And the winning submission is … SLAPSHOT.

Congratulations to Diane Leib from Fort QuAppelle, Saskatchewan. Diane is the Grand Prize winner with SLAPSHOT.

One of only three men to win a recognized college player of the year award twice, plus two men who led their teams to the World Series at both the collegiate and Major League levels highlight the 2015 National College Baseball Hall of Fame induction class.

“This class features players and coaches with some incredible superlatives,” said Mike Gustafson, executive director of the College Baseball Hall of Fame. “There are some unique and outstanding accomplishments by the individuals in this class.”

This year’s class, which will be inducted as a part of the annual celebration of college baseball on June 28-29 in Lubbock, Texas, is headlined by Lance Berkman, who led Rice to its first College World Series appearance before embarking on a stellar Major League career; and Frank Viola, the talented left-hander who led his St John’s club to Omaha in 1980 and went on to a 15-year Major League career that included winning the 1988 American League Cy Young Award.

The switch-hitting Berkman was named National Player of the Year by the NCBWA in 1997 on the strength of a .431 batting average, 41 homers and 143 RBI. His three years at Rice saw the Owls make their first NCAA tournament appearance in 1995, and their first College World Series appearance in 1997.

Viola registered a 26-2 career record at St. John’s, leading the Redmen to Omaha in 1980 where he opened the Series with a 6-1 victory over eventual national champion Arizona. However, it was another postseason win, a 1-0 12-inning thriller in the 1981 NCAA regional over Yale and Ron Darling for which he is best remembered.

Also included in the class are Joe Arnold, a two-time NJCAA All-American pitcher at Miami-Dade who also earned Most Valuable Player honors at the 1966 NJCAA World Series; former Lubbock Christian and Texas Tech Coach Larry Hays, one of only eight coaches at any level of college baseball with 1,500 wins; Al Holland, who shattered records in his four years at North Carolina A&T; Bill Holowaty, the 3rd winningest coach in NCAA Division III history; Mike Kelly, who was the consensus national player of the year in 1990 and winner of the Golden Spikes Award in 1991; and Rick Reichardt, who won the first recognized collegiate national player of the year award in 1964.

As a junior college player at Miami-Dade, Arnold played for the legendary Demie Mainieri. He is one of only two junior college players to be twice named NJCAA All-American as well as MVP of the NJCAA World Series in Grand Junction, Colorado. He later attended Arizona State where he won 11 games, finishing his collegiate playing career with a 40-5 record. He later enjoyed a stellar coaching career, leading Florida Southern to two NCAA Division II national championships before assuming the reins at the University of Florida, where he twice took the Gators to Omaha.

Hays coached Lubbock Christian to 695 wins and the 1983 NAIA national championship before moving across town to Texas Tech, where he assumed a program with a losing record throughout its history. In his 22 years on campus, he led the Red Raiders to 813 wins and all four of their conference championship titles, as well as their first nine NCAA tournament appearances. In 2008, he became only the 4th coach in NCAA history to win 1,500 games.

Holland rode a blazing fastball to a record-setting career in which he tossed four no-hitters and twice led the nation in strikeouts per nine innings. His microscopic ERA of 0.26 in 1975 also led the nation and is the 3rd best ERA in NCAA Division I history.

Holowaty led Eastern Connecticut State to four NCAA Division III national championships and was honored four times as the national coach of the year. His 1,404 wins trail only 2009 inductee Gordie Gillespie and 2013 inductee Don Schaly on the Division III list.

Kelly’s three years at Arizona State rank as three of the most illustrious in school history. He is on a list with 2006 inductees Robin Ventura and Brooks Kieschnick as the only NCAA Division I players to twice take home player of the year honors. He finished his career in Tempe with a .376 batting average, 46 homers and 194 RBI.

Reichardt was the first player in Big Ten history to repeat as batting champ. His 1964 batting average of .443 in Big Ten play earned him The Sporting News National Player of the Year recognition, plus All America honors from ABCA.

“Our voting committees consists of longtime college baseball media members, active and former coaches, retired umpires, past inductees, college baseball historians and in several cases they are also former players,” Gustafson said. ‘I commend them on another outstanding job.”

Tickets for the 2015 induction will be available in May on the Hall of Fame’s website at www.collegebaseballhall.org.