The International Sports Heritage Association (ISHA) is pleased to announce its 2019 ISHY Award winners. The nine winners were presented their ISHY trophy on October 24, 2019 during An Evening of Champions dinner at the group’s annual conference hosted by the Kansas Sports Hall of Fame.

“Spirit of Sport Magazine” by The Sport Australia Hall of Fame

“Museum Renovations” by the Cincinnati Reds Hall of Fame and Museum

Nova Scotia Sport Hall of Fame took home the top-prize for “Best in Show”, as voted on by conference
attendees, for their publication, “The Top 15: Nova Scotia’s Greatest Athletes”

The ISHY Awards program was established to provide recognition for excellence in publications by all
member sports museums, halls of fame or sports heritage organizations, regardless of size or budget,
based upon a competition evaluated by ISHA members and communications professionals.

ISHY Award applications are available through the ISHA website with a closing date of June 30th. Further
information about how to apply for a 2020 ISHY will be available in the spring.

The International Sports Heritage Association (ISHA) announced today that it will present Wichita, Kan., native William I. “Bill” Koch with its Legacy Award during its annual conference hosted by the Kansas Sports Hall Fame on Oct. 23 and 24.

Koch will receive the award at An Evening of Champions, the conference awards banquet held Thursday, Oct. 24 at 7 p.m. at the Kansas Sports Hall of Fame.

Koch is the second recipient of the award, which ISHA created in 2018 to recognize an individual or organization located in the geographical area of the annual conference in order to provide an opportunity for the host to honor a local sports heritage contributor.

“The Kansas Sports Hall of Fame is thrilled to host Mr. Koch back in his hometown to receive the Legacy Award from the International Sports Heritage Association. Mr. Koch’s connection to our organization runs deep and this honor recognizes not only his commitment and contributions to our organization, but his lasting legacy on the landscape of sports heritage,” sad Jordan Poland, President and CEO of the Kansas Sports Hall of Fame.

One of the nation’s greatest business minds and well-known philanthropists, Koch was the winning skipper of the 1992 America’s Cup – the oldest trophy in sports. He also was the winning skipper in the 1990 and 1991 Maxi Yacht World Championships, and the 1994 and 2009 12 Meter World Championships. In 1995, Koch assembled the world’s first all-women’s team to compete for the America’s Cup. His commitment to the women’s team represented a milestone in the recognition and opportunities now provided female athletes in many sports around the world.

The founder and owner of one of the largest privately-owned companies in the world – The Oxbow Group –  Koch attended Massachusetts Institute of Technology (MIT) where he earned three degrees and earned four academic honors. He also has three Honorary Doctorate degrees, including from Washburn University and Haskell University in Kansas. At MIT, Koch also played varsity basketball and participated in track and field, and rugby.

As the founder and Chief Executive Officer of Oxbow Carbon LLC, Koch’s business acumen set the stage for the company’s unprecedented growth, making it the world’s largest marketing company of fuel grade and calcined petroleum coke. With annual sales of $4 billion, and offices across the globe, Oxbow Carbon is the world’s largest producer of calcined coke, a key ingredient in the manufacturing of aluminum, and a key supplier of sulphur, sulphuric acid and fertilizers. Oxbow also started and built an alternative energy business domestically and internationally.

Ranked as one of the 25 most generous individuals in the United States by The Journal of Philanthropy in 2011, Koch may be best remembered for his mission to help less fortunate children receive a high-level education. Over the years, Koch has contributed money, time, and energy to help individuals, teachers, and classrooms get the support they have needed. Additionally, Koch started an advanced high school in Florida.

Koch has received numerous state nd national awards for his commitment to charities in his home state and around the country. He founded the Koch Crime Commission for the state of Kansas. He received the Medal of Outstanding Citizenship from the City of Wichita, the Karl Menninger Award, and the Governor of Kansas Appreciation Award. His generosity also included funding the Wichita Boathouse – headquarters for the Wichita River Kids Club, which taught sailing, kayaking and canoeing. The Wichita Boathouse is now home to the Kansas Sports Hall of Fame and Koch has been an instrumental supporter of the organization since his induction in 2004.

When the Cleveland Cavaliers announced that they were upgrading the Rocket Mortgage Field House Arena in downtown Cleveland, Xibitz was given the contract to work with the General Contractor, Whiting-Turner, and their design team, Infinite Scale, to help develop and produce exciting new elements in the arena concourse. The “Flex Walls” include beautiful graphics, big screens, interactive elements, cases with team artifacts and other engaging visuals and stories about the team and its history. The newly renovated arena will be a centerpiece for sports and entertainment in the ever- changing landscape of Cleveland. 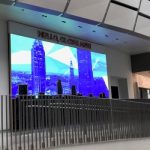 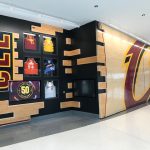