The International Sports Heritage Association (ISHA) is pleased to announce its 2016 Communication Award winners presented by At Last Communications. The 11 winners were presented ISHY trophies, which were graciously donated by Sparta Promotions, Sept. 27 during the Evening of Champions dinner at the group’s annual conference hosted by Canada’s Sports Hall of Fame in Calgary. 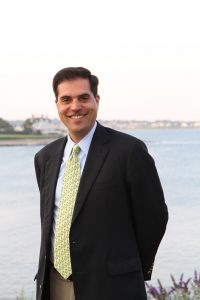 The International Sports Heritage Association (ISHA) has named International Tennis Hall of Fame Museum Director Doug Stark as its 2016 Schroeder Award recipient. Stark was presented the award on Sept. 27, 2016 during ISHA’s annual conference, which is being held at Canada’s Sports Hall of Fame in Calgary.

Presented periodically, the W.R. “Bill” Schroeder Distinguished Service Award is the highest honor presented by the International Sports Heritage Association and is given to individuals for meritorious service of lasting nature in the sports heritage industry and their communities.

“Doug Stark’s service to sports heritage is extraordinary and worthy of our highest honor,” said ISHA President Marjorie Snyder. “Whether at the Naismith Memorial Basketball Hall of Fame, the USGA Museum or in his current role at the International Tennis Hall of Fame, Doug’s commitment to our industry has never wavered. We are honored to name Doug as the winner and look forward to presenting him in September.”

Stark oversees the day-to-day operation at the International Tennis Hall of Fame in Newport, R.I. He successfully directed the International Tennis Hall of Fame’s pursuit of accreditation by the American Alliance of Museums (AAM), thereby making it the first sports hall of fame to earn accreditation. He recently directed a $3 million renovation and complete redesign of the venue while incorporating state-of-the-art exhibits. Most impressively, he has been a part of capital projects that have re-conceptualized and rebuilt three new sports museums.

His wealth of experience has included strategic thinking and new facility planning; exhibit, program, and outreach development and execution; financial management, community and board engagement; collections care; branding and messaging; and product development. He has helped make sports history more engaging, relevant, and accessible to a wider, diverse and worldwide audience.

Stark is also an accomplished author of sports heritage-related publications. He is the author of The SPHAS: The Life and Times of Basketball’s Greatest Jewish Team published by Temple University Press in 2011. He is the co-author of Tennis and the Newport Casino released by Arcadia Publishing in 2011 and he also co-authored a children’s book, Shikey Gotthoffer, published by Maine Authors Publishing in September of 2015. His latest, Wartime Basketball: The Emergence of a National Sport during World War II was published by the University of Nebraska Press in 2016. He is currently working on two additional books – one on the integration of professional basketball, and the second on editing oral histories of Jewish Basketball Players.

Stark is a New England Museum Association board member where he serves as the group’s first vice president. He is also an adjunct professor in the Museum Studies program at Harvard University.

Additionally, he has implemented programing at the Tennis Hall of Fame that caters to a wide range of visitors, including an architectural symposium that has grown into an annual sold-out community event.

The International Sports Heritage Association (ISHA) is a non-profit membership organization incorporated in 1971 to assist sports museums and halls of fame to develop, operate and promote their facilities. ISHA includes more than 130 members from countries such as China, New Zealand, Switzerland, Singapore, Australia, Canada, Qatar and the United States.  ISHA’s mission is to educate, promote and support organizations and individuals engaged in the celebration of sports heritage.

Let’s get excited about the Annual Silent Auction at the ISHA Conference!

You will have extra money to spend this year at the Silent Auction since we will not have the reverse raffle and you know this money goes to a good cause, the ISHA Founders Fund.  Bid on some great items and help promote ISHA and our fellow members through the Founders Fund.  This is a just a sampling of items that we will have in our auction.

Remember you can pay by US Cash/Check, Visa, Mastercard, or American Express. 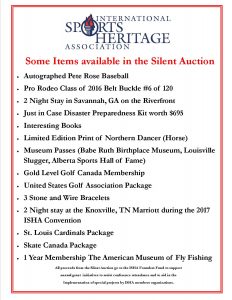 This exhibit encourages touching, running and doing. The visitor enters an unusual house consisting of six rooms: kitchen, laundry room. office, bathroom, bedroom and living room. The activities highlight and explain seven skills that are essential for moving and sport: coordination, flexibility, balance, endurance, strength, bone strengthening and cooperation. The participants gauge themselves through play. Click the “Get Active” link below for more information on this exciting exhibit.

The second exhibition, which will be available starting in July of 2017 is Called “Stadiums, Theaters of Sport.”

It is modular, requires 400-600 square meters and is currently available in English and French, although other adaptations are possible.

Since the Ancient Games, the stadium has transformed little by little, becoming more structured and now multi-functional. Its place in the city has also changed, and its social role has affirmed itself.

From being a place of experimentation and audacity, the stadium has become an “architectural gesture,” an added value created by the greatest architects, which always appears in the city’s or region’s tourist brochures.

This exhibition sets out to look at the stadium, this rather frightening colossus, through the prism of time. From its beginning in Atiquity to the stadium of the future, the stadium will be looked at as a whole, and not just in terms of architecture.

For more information on this exhibition, click the “Stadium, Theaters of Sport” link below: