What:  Japan adopted baseball in the 1870’s and the game enjoys a rich history and tradition to this day. Baseball serves as a bridge between the two cultures, as it embodies Japanese values such as harmony, perseverance and self-restraint, while sharing the ideals and the spirit of America’s pastime.

Kerry Yo Nakagawa:  Curator of the “Diamonds in the Rough” an international exhibit displayed at the National Baseball Hall of Fame, and in Tokyo.  He wrote the book “Through a Diamond, 100 Years of Japanese American Baseball in California.”  He also produced the movie “American Pastime”, the independent film which won “audience favorite” in San Francisco in 2007.

Dan Evans:  Evans knowledge and appreciation of Japanese baseball is a product of nearly four decades in baseball, with the product of immersion into Pacific Rim baseball culture over a period of 20 years.  As the Dodger’s GM (2001-2004) his international baseball savvy developed during the team’s successful reorganization that began in 2001.  Evans significantly elevated the team’s Asian footprint, continuing to do so during his time with the Mariners and Blue Jays.

The Sport Australia Hall of Fame Scholarship & Mentoring Program is a unique and valuable program for young Australian athletes. Applications are now open for the 2020 Program – closing Sunday 7th July 2019.
I write to encourage your distribution and promotion of the application information through your national, state, regional, club and coaching networks as well as promotion through your social media channels.
Since 2006, the Program has provided over $350,000 in $5,000 annual sporting grants to 73 young Australian athletes across 34 sports.
The Sport Australia Hall of Fame Scholarship & Mentoring Program consists of:
* One-on-one personal mentoring by an Inducted SAHOF Member
* A $5,000 sporting expenses grant
* On stage presentation of the Scholarship at the SAHOF Induction & Awards Gala Dinner

The highlight of the program is that each Scholarship Holder is personally mentored by a Member of The Sport Australia Hall of Fame. Mentors have included over 50 Australian sporting greats including; Dawn Fraser AC MBE, Louise Sauvage OAM, Adam Gilchrist AM, Karla Gilbert OAM, Catherine Freeman OAM and Nick Farr-Jones AM.
The mentoring aspect is a ‘money can’t buy’ opportunity. It has delivered in many cases, a profound impact on our past and present Scholarship Holders.
Note: the mentoring role is designed to bring in a worldly view of what it takes to compete at the highest level.

The Women’s Basketball Hall of Fame is proud to announce a new display dedicated to High School Girls Basketball. The new exhibit features a 75-inch interactive touchscreen that highlights the most recent state champions from across the United States. The display showcases each state champion for each state and includes a team roster, a team photo, and more for each champion. Each year in May the display will be updated with the newest year’s champions. 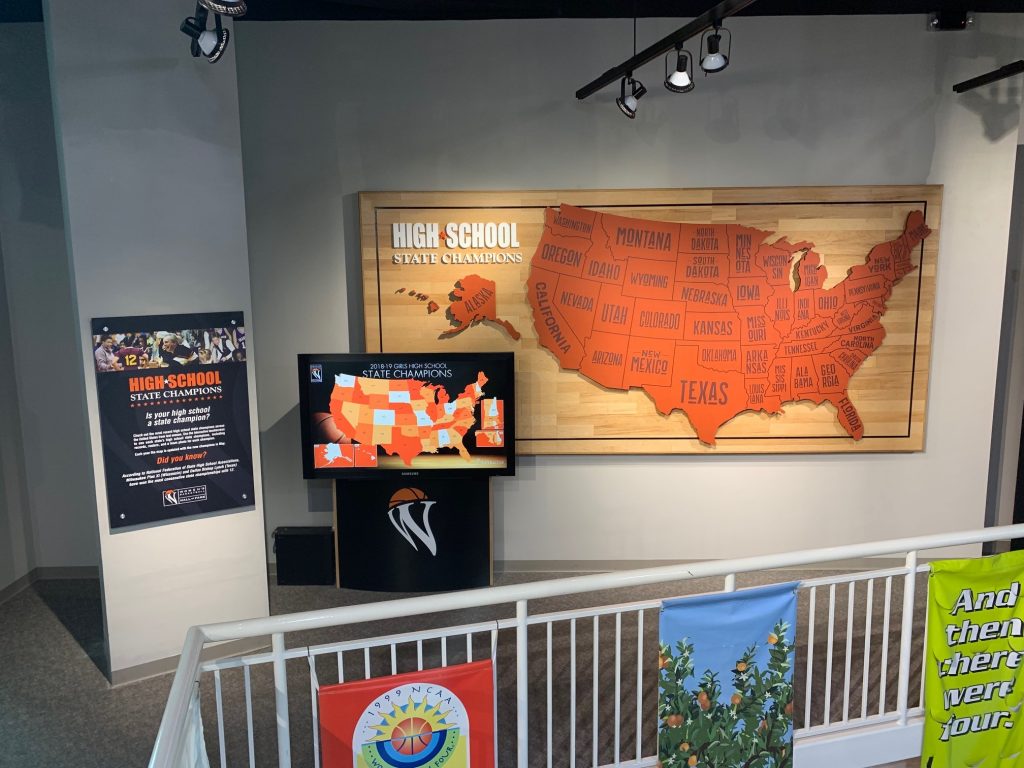 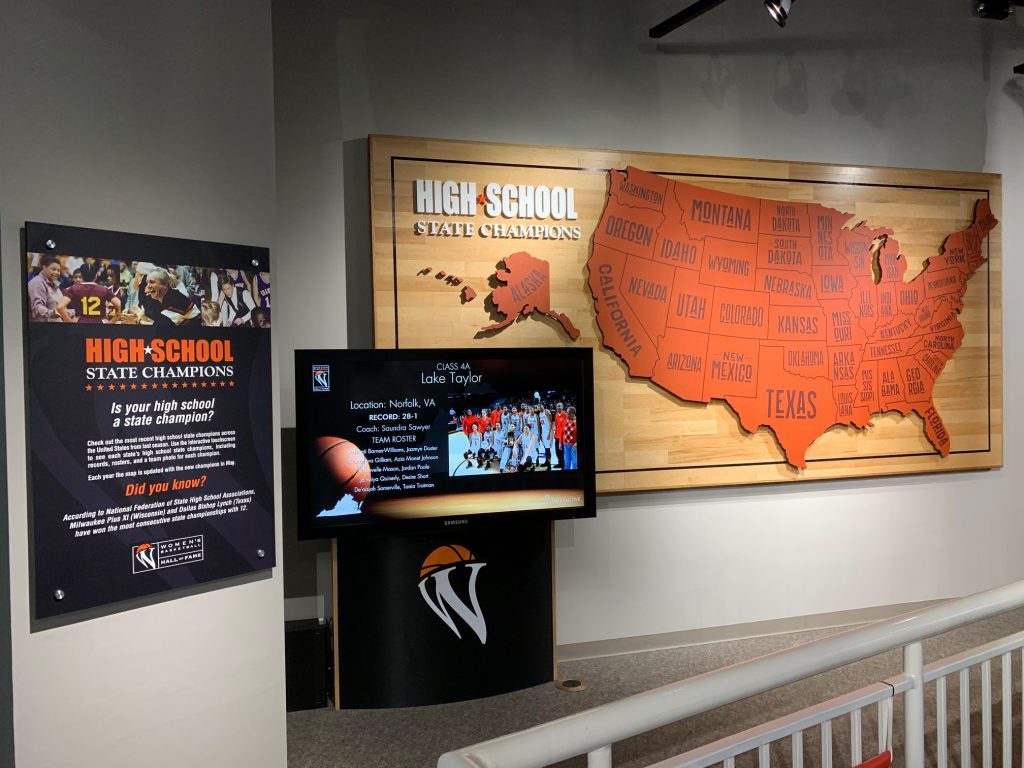 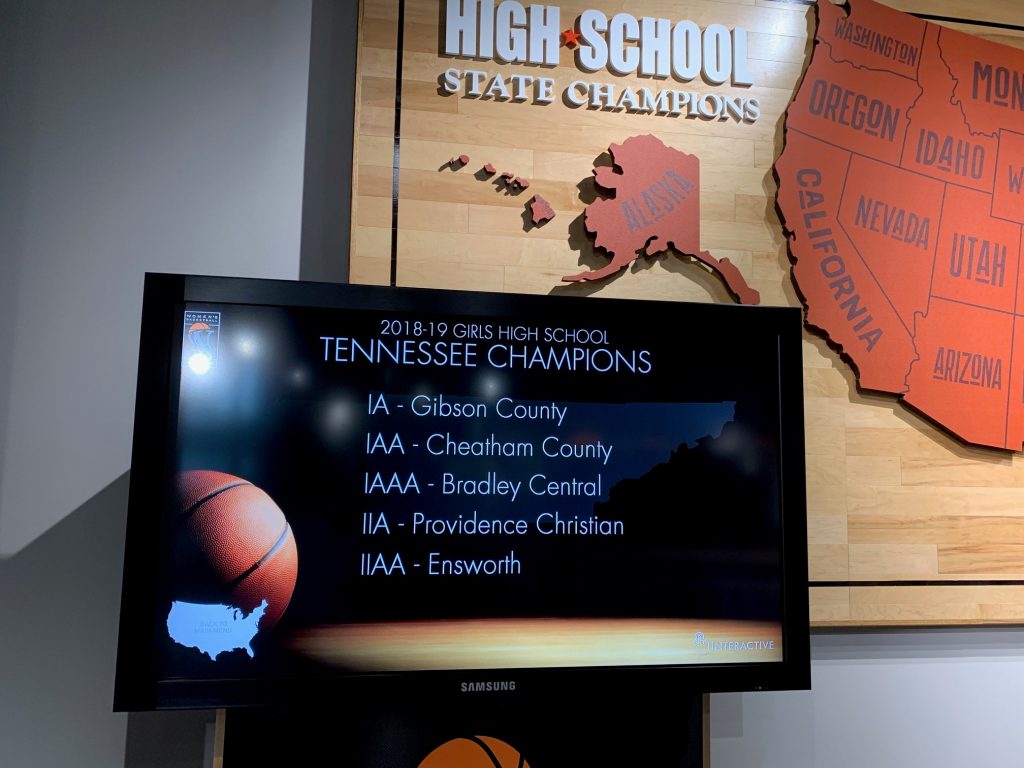 The ProRodeo Hall of Fame had two special guests arrive Wednesday, June 19 as part of its live animal display at the Hall again in Colorado Springs, Colo.
Powder River Rodeo’s saddle bronc horse Bartender and bareback/saddle bronc horse Diamond Mine were welcomed to the grounds. Both horses are 25 years old and retired from ProRodeo competition in 2012. Powder River Rodeo is headquartered in Riverton, Wyo.
The horses will be at the ProRodeo Hall of Fame until mid-September.
The exhibit will be in the ProRodeo Hall of Fame barn and will be accessible by the public (including handicapped accessibility) during regular museum hours of 9 a.m.-5 p.m. (MDT) seven days a week through August, and 9 a.m.-5 p.m. Wednesday through Sunday in September.
“The Rodeo Livestock Exhibit is very popular with our guests,” ProRodeo Hall of Fame Director Kent Sturman said. “We appreciate Powder River Rodeo’s willingness to help with this project. Their horses are some of the best in the business, and we are honored to have Bartender and Diamond Mine with us for the summer.”
The mission of the ProRodeo Hall of Fame and Museum of the American Cowboy exists to educate the public about rodeo, its history and its impact on Western American culture.
Bartender was selected to compete at the Wrangler National Finals Rodeo seven times. The mare also competed at the National Circuit Finals Rodeo and Mountain States Circuit Finals Rodeo many times. She was selected as the Mountain States Circuit Saddle Bronc Horse of the Year. Lipstick N Whiskey, Bar Keep, Bar Maid, Double Feature, all sisters to Bartender, also competed at the Wrangler NFR. Bay Rum, a 1995 Wrangler NFR selection, is Bartender’s mother, and Cut The Cards, a three-time NFR selection, is Bartender’s father. Cut The Cards is the father to Miss Congeniality (the 2005 and 2007 PRCA saddle bronc horse of the year) and Craig at Midnight (the 2016 PRCA Bareback Horse of the Year and top bareback horse at the 2017 Wrangler NFR).
Diamond Mine was selected to compete at the Wrangler NFR in 1999 and took part in many National Circuit Finals Rodeos and Mountain States Circuit Finals Rodeos. Diamond Mine’s sister is B80 Night Train, a Wrangler NFR qualifier. Cut The Cards also is Diamond Mine’s father. Diamond Mine’s offspring include Double Take, a four-time Wrangler NFR qualifier, and Look Again, a three-time Wrangler NFR qualifier.

2019 NOVA SCOTIA SPORT HALL OF FAME INDUCTION NIGHT
On Friday, November 15, the 2019 Hall of Fame Induction Night will take place at the Halifax Convention Centre. Five athletes and two builders will be celebrated for their outstanding contributions to Nova Scotia sport, including another Nova Scotia Sport Hall of Fame first!
These inductees include arguably Nova Scotia’s greatest female basketball and soccer players, the most beloved player ever to compete with the Halifax Mooseheads, the province’s biggest rugby star, two incredibly dedicated builders and promoters of local sport, and our first ever Special Olympics athlete. A force to be reckoned with in the sport of power lifting, highly decorated Special Olympics athlete Jackie Barret will make history joining the Hall of Fame this year.
Barrett will be inducted with the all-time leading scorer for Canadian women’s university basketball, Justine Colley; varsity and national team soccer superstar Suzanne Muir; Mooseheads legend and NHL player Jody Shelley; and, the record-holder for the most caps as a Canadian rugby scrum half, Morgan Williams. In the builder category, long-time Little League coach, baseball manager and community hero Henry Boutilier, along with international basketball official and mentor Roger Caulfield, will also be inducted on November 15.
The evening will be hosted by Hall of Fame CEO Bruce Rainnie. As master of ceremonies for the 21st consecutive year, Rainnie is excited to showcase this distinguished class of inductees with his friendly and entertaining interview style.
Tickets for the 2019 Induction Night are on sale now at the Nova Scotia Sport Hall of Fame. Call 902-404-3343 to place your order. 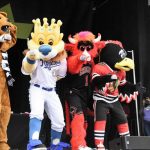 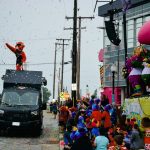 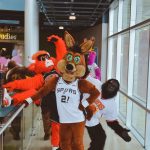 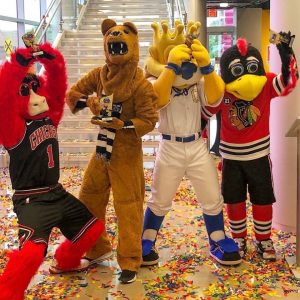 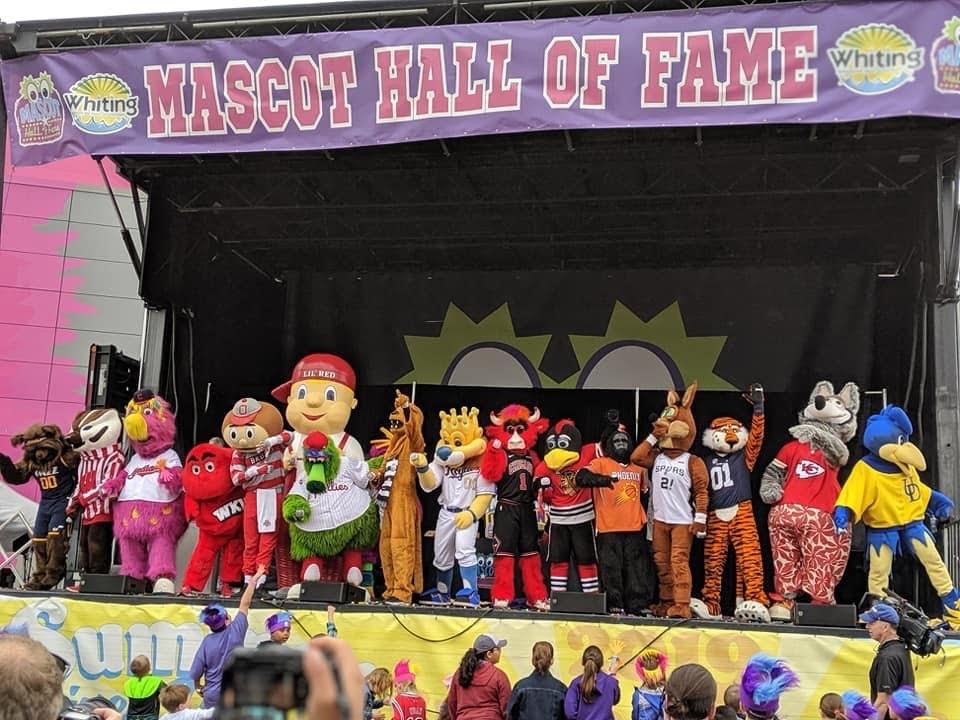 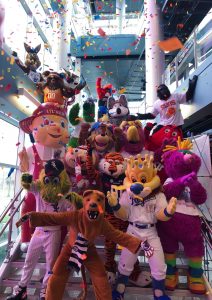 The Saskatchewan Sports Hall of Fame has had a busy start to the summer.
Our newest exhibit, Evolution of Sport, opened on June 6 and takes visitors through the history and evolution of the tools of the trade for numerous sports. Using artifacts from our permanent collection, visitors can see the progression of safety equipment and sporting implements from the 19th century to today as technology and new materials changed the sports we play.
The exhibit also features a touch table which allows visitors to interact with some vintage equipment to get a better feel for how sports were played in the near and distant past. The exhibit will run until August 17.
Our Creating Active Champions program begins on July 2 for another year. The program is offered over seven weeks for students between the ages of 4-12. Over their 90-minute stay, guests will learn some of Saskatchewan’s sports history while also taking part in physical activities on our multi-sport simulator, adaptive curling rink and also playing games outside in Victoria Park adjacent to the Hall.
The program is offered twice a day until August 16. Available spaces were more than 70 per cent full in advance. Thanks to our community and sports agency sponsors, each child will receive a gift bag with equipment to help them stay active and other sports-related goodies.
After a long winter, we kicked off the warmer weather by hitting the road with our mobile exhibit trailer as part of our Never Give Up program.
The program and trailer toured schools in the province with SSHF inductee Ted Jaleta who shared his inspiring story with the students. Jaleta fled the Ethiopian Civil War after being shot, imprisoned and tortured before escaping and settling in Canada in 1982.
The Never Give Up program began in 2011 and has featured a number of Saskatchewan sports personalities over the years who have shared their stories of overcoming obstacles and hardships to achieve their success. 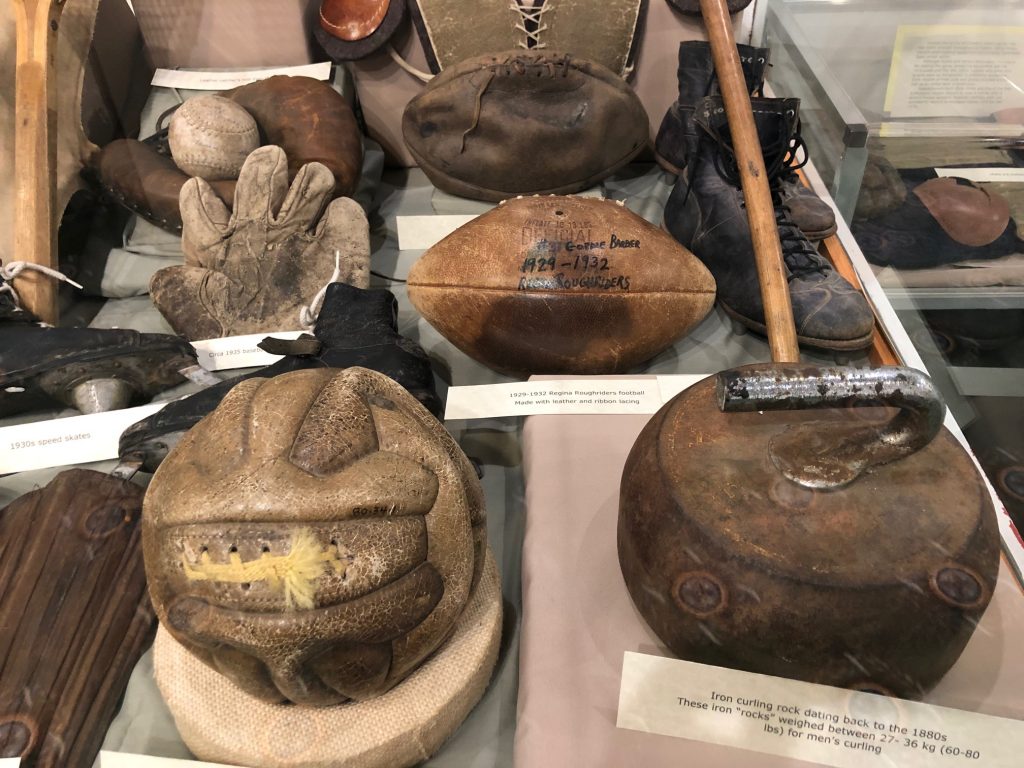 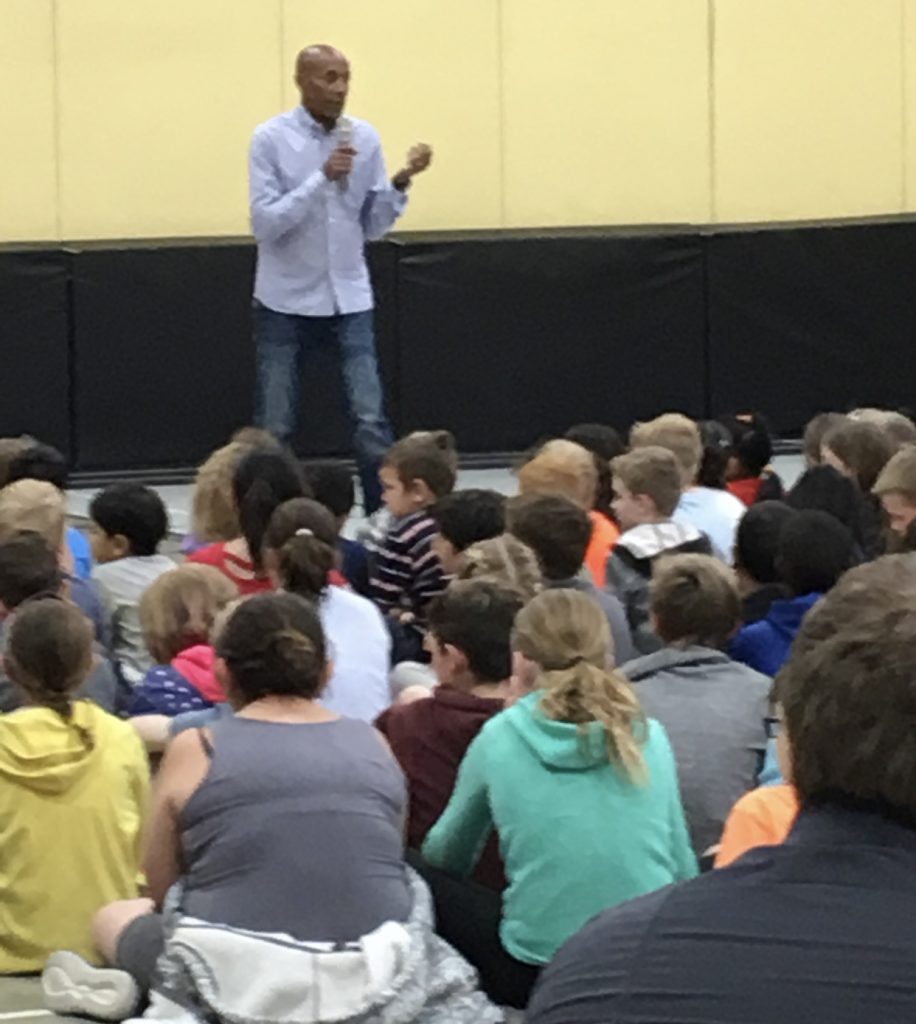