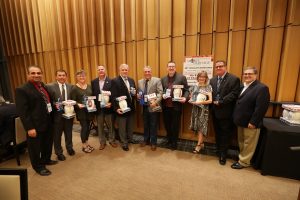 The International Sports Heritage Association (ISHA) is pleased to announce its 2018 ISHY Award winners. The nine winners were presented their ISHY trophy on Sept. 27 during the Evening of Champions dinner at the group’s annual conference hosted by the 49ers Museum in Santa Clara, California.

The Patriots Hall of Fame’s winning exhibit titled Super Bowl LI: Anatomy of a Comeback was also voted by conference attendees as the “Best in Show” overall winner.

The ISHY Awards program was established to provide recognition for excellence in publications by all member sports museums, halls of fame or sports heritage organizations, regardless of size or budget, based upon a competition evaluated by ISHA members and communications professionals.