FOXBOROUGH, Mass. – The New England Patriots announced that cornerback Raymond Clayborn has been voted by fans as the 26th person to be inducted into the Patriots Hall of Fame. 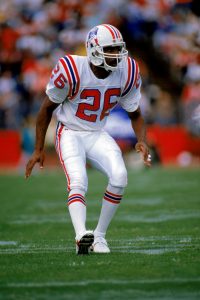 Clayborn was a three-time Pro Bowl player (1983, 1985, 1986) during his 13-year Patriots career that extended from 1977 through 1989. He was drafted by the Patriots in the first round (16th overall) out of Texas in 1977 and quickly established himself as one of the game’s best cornerbacks, as well as a superb kickoff returner. He set a franchise record with 36 career interceptions, a record which Ty Law tied in 2004 and remains today, 28 years after Clayborn finished his Patriots career. His 555 interception return yards rank second in franchise history to Law’s 583 return yards. Clayborn also returned 57 kickoffs for 1,538 yards and three touchdowns. As a rookie in 1977, he returned 28 kickoffs for 869 yards and led the NFL with a 31.0-yard return average and returned three kicks for touchdowns, both of which remain franchise records. He is one of just 20 NFL players since the 1970 merger to finish a season with a better than 30.0-yard average on kickoff returns (min. 20 returns) and is the only Patriots player to accomplish the feat.

“I was fortunate to be a season ticket holder during Raymond’s entire Patriots career,” said Patriots Chairman and CEO Robert Kraft. “For the first half of his career, he teamed with Michael Haynes to form one of the best corner tandems in league history. Throughout his career, Raymond was a physical, shutdown corner. One of my favorite memories was watching the 1985 team advance to the Super Bowl after Raymond helped us break the Orange Bowl curse when he stymied future Hall of Fame quarterback Dan Marino with a dominant performance against Pro Bowl receivers Mark Duper and Mark Clayton. Raymond had six passes defensed and an interception to help us claim our first conference title. It was the greatest upset victory in franchise history at the time and one the entire New England region celebrated. It is a well-deserved honor and I look forward to presenting him his hall of fame jacket.”

Clayborn played a vital role in bringing the Patriots to respectability in the late 1970s and early ‘80s. During his 13 seasons in New England, he helped lead the Patriots to 10 winning seasons, including four postseason berths. In a 31-14 AFC Championship victory that propelled the Patriots to their first Super Bowl appearance, Clayborn’s performance helped end an 18-game losing streak to the Miami Dolphins in the Orange Bowl. Clayborn was a member of the Patriots’ 1970s and 1980s all-decade teams. He also set a franchise record by playing in 161 consecutive games.

This year marked the fourth consecutive year (2014-17) that Clayborn had been nominated as a Patriots Hall of Fame finalist.

Beginning in 2007, the Patriots started a new hall of fame tradition, inducting at least one player to The Hall each year. The process for induction involves a panel of media, alumni and staff who collectively nominate the players or head coaches most deserving of induction. After the nominations are made, the committee votes and the top three tallies become that year’s finalists. The Patriots then give their fans the opportunity to vote online to make the annual selection. The New England Patriots held their annual nomination committee meeting on April 12 to select this year’s Patriots Hall of Fame candidates. The finalists were (listed in alphabetical order) Clayborn, defensive lineman Richard Seymour and linebacker Mike Vrabel.

The Hall at Patriot Place presented by Raytheon is the crown jewel of Patriot Place and the only sports and education experience of its kind. Through a dazzling array of interactive multimedia exhibits, artifacts never before viewable by the public and home of the Patriots’ five Lombardi Trophies, The Hall at Patriot Place presented by Raytheon showcases the tradition of the New England Patriots, explores the history of football in New England and promotes math and science education for the thousands of schoolchildren who visit each year. For more information, please visit www.thehallatpatriotplace.com. 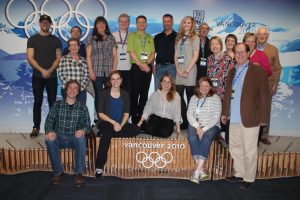 The BC Sports Hall of Fame hosted colleagues from across Canada April 19, 20 and 21 during the Canadian Association of Sport Heritage Conference: Connecting and Collaborating Through Sport Heritage. Delegates spent three days learning, sharing and collaborating about the unique work of Halls of Fame.