With hurricane season in full swing, here are some reminders from  the Heritage Emergency National Task Force. Please share this information widely.

If you have any questions, please contact the Heritage Emergency National Task Force directly at [email protected].

FEMA and the Smithsonian Institution co-sponsor the Heritage Emergency National Task Force, a partnership of 42 national service organizations and federal agencies created to protect cultural heritage from the damaging effects of natural disasters and other emergencies.

July 8, 1867 marked the 150th anniversary of the Paris Crew’s astonishing victory at the World Rowing Championship in Paris, France. Their win, just seven days after Confederation, made the New Brunswick based rowers the first Canadians to win an international sporting event.  The “Saint John Four” overcame remarkable odds to defeat the much better trained and equipped Oxford University crew and by doing so became Canada’s, and New Brunswick’s, first sports heroes. The crew was comprised of Elijah Ross, George Price, Samuel Hutton, Robert Fulton –three fishermen and a lighthouse keeper. In celebration of this significant historical event, the NB Sports Hall of Fame (NBSHF) spearheaded the delivery of initiatives to commemorate this 150th anniversary.

The New Brunswick Sports Hall of Fame undertook various commemorations activities to tell the story of the Paris Crew; including:

In order to carry out our Paris Crew project, we graciously received funding from the the Government of New Brunswick Commemorations Fund, International Sports Heritage Association Exhibit Grant, the Canada Heritage Community Stories Grant, and the City of Fredericton.

At the New Brunswick Sports Hall of Fame, our mission is to preserve and celebrate our sports heritage to inspire greatness. Our vision is to honour the best and inspire the rest. For more information please visit us at http://nbsportshalloffame.com/, like us on Facebook at https://www.facebook.com/NBSportsHallofFame/, or follow us on Twitter @ NBSHF.

The New Brunswick Sports Hall of Fame is thrilled to announce that the various activities held throughout the summer of 2017 have reached over 11,850 people, to date.

The Reds Hall of Fame is excited to announce the six candidates on the 2018 Modern Player Ballot, presented by Clark Schaefer Hackett, the official accounting firm of the Reds Hall of Fame Ballot. Candidates are also listed below with their positions and years as a Red. Fans can vote at www.redsmuseum.org and engage in the conversation on social media by using #VoteRedsHOF. There is a limit of one vote per person/email address per day. Voting is open now, and fans may cast ballots online through September 30.

Only one Modern Player will be selected for induction as part of the Reds Hall of Fame’s Class of 2018. The votes from the fans will be combined with ballots from select members of the media and Reds alumni to determine the inductee.

The six players were nominated by the Hall of Fame’s Election Governance Committee.

To be eligible for consideration on the Modern Player Ballot, players have to meet the following requirements:

Complete voting rules and procedures may be found at www.redsmuseum.org along with biographies of each candidate.

It arguably started with 6:04 left in the third quarter. The New England Patriots trailed the Atlanta Falcons, 28-3, in Super Bowl LI and faced a fourth down-and-three situation. Fail and it was almost certainly game, set, match – a disappointing blowout loss on the game’s biggest stage.

The Patriots had shown a bit of desperation, calling a rare double pass on third-and-three that fell incomplete and was well defended. So now quarterback Tom Brady and the offense faced the most important play of what would be many over the final 21 minutes.

Brady caught the snap, saw Julian Edelman double teamed in the middle of the field and hit Danny Amendola out to the left, who then broke a tackle and gained 17 yards and a first down.

“It was an option route out there to the slot against man coverage,” head coach Bill Belichick explained in an exclusive interview for The Hall’s “Anatomy of a Comeback” exhibit, which will open on Thursday, July 29. “It was a good throw, a good catch and obviously a big play for us.”

Of course, the big plays continued for New England. NFL Films caught linebacker Dont’a Hightower on the field imploring his teammates “No more mistakes. No more ‘my bads.’

Over those last 21 minutes, almost everything had to go New England’s way and nearly everything did. Well, except for a botched onside kick and a missed extra point that forced the Patriots to convert a pair of two-point conversions to draw even. But that just reinforced Julian Edelman’s halftime point that the comeback would make a “hell of a story.”

It sure did. And The Hall is now uniquely telling that story within The Super Bowl Experience exhibit, which is presented by Raytheon. The new “Anatomy of a Comeback” area features 8 monitors – two 55-inch displays and six 22-inch mosaic tile-like displays. After conducting exclusive interviews with Belichick, Julian Edelman, James White, Devin McCourty and Trey Flowers, The Hall will present the comeback differently that what has aired on the NFL Network.

“It’s the anatomy of the comeback, not just highlights and in-game audio from the players and coaches,” Hall executive director Bryan Morry said. “NFL Films does an amazing job of capturing all of that in-game action and producing shows that we all love. So we wanted to attack it differently. They provide us access to their footage, which we utilize to add color, but we wanted to provide our fans with Coach Belichick’s perspective. What adjustments were made? What was the mindset at 21-0 and 28-3? We think fans will be deeply and emotionally engaged in what we produced.” 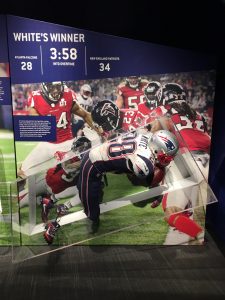 The exhibit also features large graphics and artifact display cases that will be displayed in a non-traditional way. Artifacts including White’s uniform and the game-winning touchdown ball; Edelman’s helmet and gloves; and the ball Matt Ryan fumbled on Hightower’s strip sack will be displayed within the graphic images of those plays to create a three-dimensional effect.

None of that is possible, however, if Brady doesn’t find Amendola for that fourth-down conversion, which eventually led to the 5-yard Brady-to-White touchdown pass that started the comeback. That score came with just 2:06 left in the third quarter. The missed extra point left the Patriots down, 28-9, with 17:06 left to play.

“I told the team at halftime when it was 21-3 that I didn’t think Atlanta had enough points to win,” Belichick revealed. “I felt like we had plenty of time and that the point differential wasn’t so great that we couldn’t overcome it.”

The two first half turnovers that resulted in 14 Atlanta points was the obvious reason for the deficit. New England outgained Atlanta in the first half, 210-189, but a LeGarrette Blount fumble at the Falcons 29 snuffed out one scoring chance and led to an eventual Falcons touchdown while a Tom Brady interception that was returned for an 82-yard touchdown thwarted another.

“I felt like we had control of the game, but we didn’t have control of the score,” Belichick said. “When it went to 28-3, then you’re looking at not having enough possessions to be able to close the gap. So at that point, it was starting to feel a little bit different than it did at halftime.” 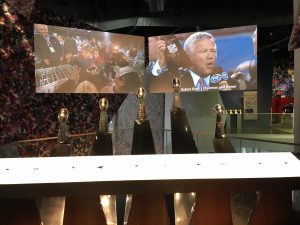 It also, in some respect, took the pressure off, according to Patriots safety Devin McCourty. “I think all the pressure went away,” he said. “For us as a defense, it was just about going and playing ball. We were just playing to fight and claw to get back in the game and make it respectable. I think it allowed us to play free and fast because we had nothing to lose at that point.”

“The nature of that comeback required us to do something different at The Hall,” Morry said. “We couldn’t just add a Super Bowl trophy and some highlights and be done with it. The Krafts recognized that and made a significant investment to improve the Super Bowl Experience exhibit that we just renovated two years ago. We think the fans will love it.”