For two weeks in June 2014, the eyes of the golf world focused on the Village of Pinehurst in North Carolina, where Donald Ross’ famed Course No. 2 hosted the unprecedented back-to-back U.S. Open and U.S. Women’s Open.

One week after Martin Kaymer earned a resounding eight-stroke victory in the U.S. Open, Michelle Wie captured her first major championship by holding off a hard-charging Stacy Lewis in the final round. Wie rebounded from a double bogey on the 70th hole with a 25-foot birdie putt on the 71st to secure her two-stroke victory. Her meticulous preparation for the championship included studying yardage books she borrowed from friends Keegan Bradley and Rickie Fowler. For Wie, a career marked with so much promise and potential at a young age was fulfilled with a major championship breakthrough at the U.S. Women’s Open.

Just as Michelle made her entry at a young age, eleven-year-old Lucy Li is the youngest qualifier in U.S. Women’s Open history. The California native began playing golf at age 7 and in April 2014 won the Girls age 10-11 division in the inaugural Drive, Chip & Putt Championship.

At Pinehurst No. 2, Li shot consecutive 78s and missed the 36-hole cut, but she impressed fans and fellow competitors alike with her skill and poise. She wore this American flag-patterned shirt during the first round. Li remained at Pinehurst for the weekend, walking with the final grouping as a spectator.

On Display are artifacts of Michelle Wie, 2014 U.S. Women’s Open

LUBBOCK, Texas — The National College Baseball Hall of Fame announced today the cre­ation of its newest award, designed to honor the accomplishments of college baseball players who went on to achieve greatness off the diamond.

“There are many college baseball players who enjoyed tremendous professional careers far re­moved from the baseball diamond,” said Mike Gustafson, president and CEO of the National College Baseball Hall of Fame. “Many of these men credit their involvement in the game for some of their later successes. We are proud to honor their accomplishments in this way.”

The award will be named after its inaugural recipient, George H.W. Bush, who after playing for Yale from 1946 to 1948 went on to be elected the 41st President of the United States. It will for­mally be called the George H.W. Bush Distinguished Alumnus Award.

To be eligible for the award, an individual must have earned a varsity letter in intercollegiate base­ball competition.

Bush, called “Poppy” by his teammates, played first base for the Yale teams that played in the first two College World Series. He also served as the team captain for the 1948 squad.

“President Bush is truly an excellent example of what this award is designed to embody, and we are thrilled to present the first award to him and to have it bear his name going forward,” Gustafson said.

The award will be presented annually at a fall banquet in the recipient’s hometown. The recipi­ents also will receive a bronze trophy, designed by Garland Weeks, depicting the Yale hat worn by Bush and the Rawlings George McQuinn “Claw” first baseman’s mitt used during his Yale career. He famously kept the glove in his desk drawer during his time in the Oval Office.

The inaugural award will be presented on Nov. 13 at Union Station at Minute Maid Park in Houston, Texas. Tables of 10 for the event start at $5,000 and are on sale now. George P. Bush will accept on behalf of the former president.

For more information on the George H.W. Bush Distinguished Alumnus Award or to purchase tables for the inaugural presentation, contact Mike Gustafson at [email protected] or call (806) 749-2233.

On the spooky night of October 29th, join that Alberta Sports Hall of Fame and Museum in some fun Halloween games and thrills. All ages welcome. 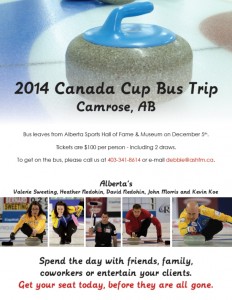 It’s that time of year again and the Alberta Sports Hall of Fame & Museum is setting up another curling bus trip. Join us on Friday December 5th as we head to Camrose for the 2014 Canada Cup curling event.

Spend the day with friends, family, coworkers or entertain your clients. Get your seat today, before they are all gone.

It may seem like a while away, but the deadline for the Nomination Packages is quickly approaching.  Please have completed packages to the Alberta Sports Hall of Fame & Museum by 4pm on January 31st.  If you have any questions about your package, please feel free to contact the museum at any time.  403-341-8614 or email Debbie Brigley at [email protected]