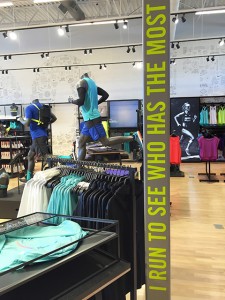 When Nike decided to open a new store near Boston in Lynnfield, MA, EDE was asked to help support their plans and designs.  Working closely with their project and design team, we supplied samples of various graphic application techniques and samples of paint colors to help them clarify all elements of the design.  Once finalized, we produced graphics that would subtly “cover” walls with relevant logos, add color and interest to columns, and provide signage.  We also fabricated components around the store to support the technology and brand messaging. Our installation team worked closely with Nike’s lead designer, and the completed store is a warm, airy and engaging environment that showcases the running gear and apparel, while surrounding the shoppers with inspiration and motivation.  The photos shown here include some “close-up” shots of in-process application of graphics; our crew worked tirelessly, and the end result is a subtle yet stunning brand statement. At Nike, everyone leaves the store energized and ready to run!   As part of the Nike team, we truly understand that “Just Do It” is a way of life.

On May 27, the USGA Museum held a grand opening ceremony for The Jack Nicklaus Room. The new space, which celebrates the life and career of the 18-time major champion, joins galleries that honor Bob Jones, Ben Hogan, Arnold Palmer and Mickey Wright. The 1,200-square-foot exhibit space contains more than 80 artifacts, several on loan from the Jack Nicklaus Museum in Columbus, Ohio.

From his first U.S. Open victory in 1962 to his last Green Jacket in 1986, Nicklaus had the skill and the determination to compete more successfully than anyone else in golf’s major championships. He compiled the best amateur record since his hero, Bob Jones, capped his career by winning the Grand Slam in 1930. Nicklaus won two U.S. Amateurs and played on two victorious USA Walker Cup Teams. He turned professional in November 1961 and embarked on a career that included 73 PGA Tour victories and a record 18 major championship titles. He won a record-tying four U.S. Opens, six Masters Tournaments, three British Opens and five PGA Championships—an amazing testament to his three decades of sustained excellence.

Nicklaus did not become golf’s greatest major champion on ability alone, however. His competitive spirit, self-belief, commitment, integrity, perseverance and vision were among the values that helped turn his unquestioned skills into unmatched success. The room chronicles Nicklaus’ accomplishments by utilizing 10 touchscreen interactives, which allow visitors to hear directly from Jack. Nicklaus uses his own words to tell you what made him a successful player; respected golf course designer and businessman; and dedicated husband, father and grandfather. By utilizing this first-person narrative technique, we hoped to create a uniquely personal and intimate experience.

Some of the highlights of the room include a painting of Nicklaus, shown at the peak of his career during his 1972 U.S. Open victory at Pebble Beach. The artist, Harold Riley, has painted portraits of popes, U.S. presidents and the Royal Family of the British Monarchy. There is also a bronze sculpture of Nicklaus, created by renowned artist Zenos Frudakis. Jack is shown celebrating a birdie on the 71st hole of the 1980 U.S. Open at Baltusrol. The image is one of his wife Barbara’s favorites. Some of the iconic artifacts in the room include:

TORONTO (June 29, 2015) – Lanny McDonald, incoming Chairman of the Hockey Hall of Fame and John Davidson, Chairman of the Selection Committee, announced today that seven individuals have been elected to Hockey Hall of Fame Honoured Membership, five in the Player Category and two in the Builder Category.  The vote took place today at the annual meeting of the Selection Committee in Toronto.

In the Builder Category, Bill Hay and Peter Karmanos Jr. were elected.

The first NCAA graduate to play in the National Hockey League, Bill Hay’s contributions to hockey span from grassroots to the professional level. His distinguished hockey resume includes contributions made while serving as President and Chief Operating Officer of Hockey Canada, President and Chief Executive Officer of the Calgary Flames, and most recently as Chairman of the Hockey Hall of Fame.

“Being recognized by my hockey peers is truly a great honour,” said Hay. “Seeing the game – and the Hockey Hall of Fame – become truly international has been a tremendously rewarding experience.”

One of hockey’s great benefactors, Peter Karmanos Jr. has helped enable the success of dozens of American hockey teams and thousands of players. The Detroit native captured a Stanley Cup as Chief Executive Officer, Owner and Governor of the Carolina Hurricanes in 2006.

“Being included in the Hockey Hall of Fame class of 2015 ranks right up there with winning the Stanley Cup,” said Karmanos. “Hockey has a special place in my heart. It is the greatest team sport, and I believe the greatest game a boy or girl could play. Giving more kids the chance to play at the highest levels has truly been a labour of love.”

The first Russian to reach the 1,000 point milestone in the NHL, Sergei Fedorov played in six All Star Games, captured three Stanley Cups with the Detroit Red Wings, and was awarded the Hart Memorial Trophy as the league’s most valuable player in 1994.

“I have always played hockey because I loved it, not because I wanted to win awards,” said Fedorov. “But now that my career is over I realize how special it is to be recognized by the Hockey Hall of Fame. I am deeply honoured to be an inductee.”

“I am absolutely elated to be entering the Hockey Hall of Fame as part of the class of 2015,” said Housley. “One glance at the Legends who have already been enshrined proves that this really is the ultimate honour for a hockey player.”

A seven-time recipient of the James Norris trophy as the NHL’s top defenseman, Nicklas Lidstrom also captured four Stanley Cups with the Detroit Red Wings and an Olympic Gold Medal for Sweden.

“During my hockey career I was always focused on the next game or the next season, so I never allowed myself to imagine I’d be hearing from the Hockey Hall of Fame” said Lindstrom. “I took a lot of pride in being dedicated to the game, so it means a great deal to me to be recognized by those who know the game the best.”

One of the toughest competitors to ever patrol the blue line, Chris Pronger captured both the Hart Memorial Trophy and James Norris Trophy in 2000. The native of Dryden, Ontario also captured two Olympic Gold Medals for Canada and a Stanley Cup with the Anaheim Ducks in 2007.

“It’s very humbling to be included alongside the esteemed group of players and builders in the Hockey Hall of Fame’s class of 2015,” said Pronger. “It’s very exciting to think about becoming an Honoured Member. It’s certainly something I didn’t expect while playing.”

“I’ve visited the Hockey Hall of Fame many times, and never get tired of learning about the rich tradition of the inductees,” said Ruggiero, who is the fourth female ever elected for induction. “The fact that I’m now joining them is very special, and the greatest accomplishment I can think of as a hockey player.”