The Nova Scotia Sport Hall of Fame (NSSHF) will have a brand-new Hall of Fame facility in a familiar old location.

After closing its previous home adjacent to the Scotiabank Centre in fall 2020, the NSSHF has negotiated a new lease with landlord Armco Capital, and will return to its old location after undertaking significant renovations to build a bigger and better Hall of Fame museum.

“There were many great potential sites around the province, but we kept coming back to the idea that it is an amazing bonus to be attached to the province’s major arena,” says NSSHF President & CEO Bruce Rainnie. “We realized that the location was ideal for the Nova Scotia Sport Hall of Fame, so we went back to the landlord and found a way to make it work.”

Renovations are beginning now, and will include an approximate 30 per cent increase in square footage. The NSSHF redesign will allow for many improvements including three key features:

Prior to closing in 2020, the NSSHF had occupied the location at Scotiabank Centre since 2006, operating a free-admission museum year-round and welcoming more than 70,000 visitors annually.

The project, including exhibit installation, is expected to be complete within 2023. While the Hall of Fame facility is closed for this exciting project, the NSSHF will continue to offer its free education program, its annual selection process and Induction Night, research assistance and more. Read the full media release here: https://nsshf.com/recent-media-releases/

Major Taylor’s bicycle is on its way to his hometown, Indianapolis. The Indiana State Museum is receiving a Peugeot that he raced on during his popular 1903 campaign in Paris and around the Continent. The track-racing bicycle, on loan from the U.S. Bicycling Hall of Fame in Davis, Calif, is the only known bicycle owned and raced by the pioneering cyclist and world champion Marshall “Major” Taylor (1878-1932).

The bicycle will be a crucial component of the exhibit, “Major Taylor: Fastest Cyclist in the World,” to run at the Indiana State Museum from March 5 to October 23, 2022. The downtown Indianapolis museum is close to where Taylor grew up, rode bikes, and worked in bike shops during the bicycle boom of the late 1800s.

The U.S. Bicycling Hall of Fame also is lending an original copy of Taylor’s autobiography, “The Fastest Bicycle Rider in the World,” with a hand-written inscription to African American scholar and civil rights pioneer W.E.B. Du Bois. As part of the loan agreement, the Indiana State Museum is refurbishing the Taylor autobiography to preserve the book to educate future generations on Taylor’s contributions.

The Taylor bicycle, a 1900 Peugeot brand single gear track racing bicycle with steel frame and wooden wheel rims, is part of the USBHOF permanent collection and is owned by the U.S. Bicycling Hall of Fame. The bicycle is typical of an era when bicycle riders remained seated at all times during races. The bike’s chainring has 28 one-inch-teeth spaced out on the front chainring and just nine on the rear cog—sprinter’s gearing, equivalent to today’s 56 X 18 combination.

Taylor won the 1899 world professional sprint championship in Montreal and the American title that year and defended his American crown in 1900 for his third consecutive national title. He earned his nickname “Major” as a youth in Indianapolis while performing bicycle tricks outside a shop while wearing a military-style jacket. Taylor would move to Worcester, Mass., and become known as the “Worcester Whirlwind.”

Taylor’s bike was donated to the U.S. Bicycling Hall of Fame in the 1990s by Joe Côté of Worcester. Côté, who raced bicycles in New England in the 1930s, acquired a collection of Taylor’s bicycles and rode them in July Fourth Parades, telling anyone interested about Taylor’s legendary exploits. The Taylor bike remains one of the Hall of Fame’s most popular pieces at its location in Davis, California.

The exhibit at the Indiana State Museum is part of a broader effort in Taylor’s home state to increase recognition of Taylor’s achievements. The Major Taylor Coalition of Indianapolis, which helped spearhead a new downtown Indianapolis mural of Taylor, also assisted in making this museum loan possible.

“Major Taylor is a giant of Indiana history. This exhibit provides a rare opportunity for Hoosiers to learn about his life and career. To see a bicycle that he actually raced helps his history come alive,” said Daniel Lee, U.S. Bicycle Hall of Fame Board Member and, with Tandy, a member of the Major Taylor Coalition of Indianapolis. 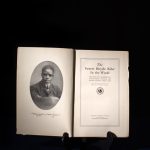 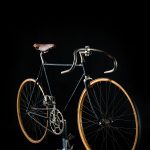 According to National Sprint Car Hall of Fame & Museum Foundation executive director Bob Baker, “This
year’s inductee group is another testament to the hard work put in by our 72-member National Induction Committee!”

A new exhibit entitled “Treasures from the Vault” has opened in the ProRodeo Hall of Fame’s 101 Gallery. The display features newer acquisitions as well as items from smaller collections owned by the Hall that have not been out for public viewing in some time.

The major featured collection in the show is 32 years’ worth of NFR jackets from 1990 through 2021. This collection originates from two donors, Jim Crapnell and Jeannie Cunningham. Other pieces in the exhibit include belt buckles, Hap Henriksen and Edd Hayes sculptures, NFR wine collection, barbed wire collection, Rodeo Ben and Wrangler apparel, a portrait of Ike Rude and Coors advertising and logo items.

“It’s fun to bring out items that have not been on exhibit in a while or maybe not at all,” said Kent Sturman, Director. “As with any museum, we have more items than we can ever put on display at the same time or year-round. Having a variety of artifacts in our collection allows us the opportunity to build creative exhibits that each tell a portion of the story of professional rodeo and our western heritage.”

Since its beginning in 1979, the Hall of Fame has collected items from across the rodeo world. Often these items do not correspond to an inductee or other display and are usually kept in storage. This gallery display is meant to highlight some of the newest additions to those collections as well as feature items not seen before.

The buckle display includes a NFR Hesston belt buckle series dating back to 1974. Other buckles in the exhibit are from the National Western Stock Show, Cheyenne Frontier Days, and the Cody Stampede. The Hap Henriksen sculptures are of Mountain Men, Cowboys and Rodeo Clowns. They are unique and different from the bronze sculptures normally done in western art.

The wine bottles in the collection came from Harla Kadrie, a former longtime employee of the PRCA, and each one features biographies of champion cowboys on the label. The Edd Hayes sculptures displayed are from his “Legends of Rodeo Collection” and are of Jim Shoulders and Dean Oliver.

Leo Ververs collected, tagged, and created the barbed wire displays in the exhibit. He donated the panels in 1992. Still a fundamental part of the taming and closing of the West, barbed wire comes in a multitude of varieties and styles. This collection features over 100 different types.

If you ever wondered how the Wrangler brand came to be, read about Polish-born tailor, Rodeo Ben. His story was featured in rodeo comic books that were sold with each pair of Wrangler jeans in the 1950s and 60s. The display highlights some apparel designed by Rodeo Ben.

The focal point of the exhibit is a six foot by 12-foot Coors beer print advertisement that is from a 1991 advertising campaign launched by Coors. The campaign was a series of images of rodeo cowboys in rodeo events that highlighted a bottle of Coors as an animal. This print shows two cowboys team roping a Coors beer bottle “steer.” The print, mounted on a wooden panel, used to hang in a night club in Lafayette, Colorado.

“Treasures from the Vault” will be on display in 101 Gallery until September.

The Ali Center transitioned their collections management software to HistoryIT’s Odyssey Preservation Software, which includes digital museum development capabilities. HistoryIT supported the transition with an updated metadata plan as well as migration services.    The Ali Center has used Odyssey to fulfill the organization’s mission to preserve and share the legacy and ideals of Muhammad Ali by opening up its collections and offering online exhibits for the world to experience. Using features within the software, the Ali Center can easily provide access to unique and meaningful portions of their collections, including Pop Culture, Humanitarianism & Social Justice and Oral Histories.    As they continue to digitally preserve their collections, the Ali Center uses Odyssey to manage those collections and regularly update their online exhibition to shed light on behind-the-scenes moments in Ali’s life. Their current exhibit, Training the Greatest: The Story of Ali and Dundee, shares the fascinating relationship between the Heavyweight Championship of the World and his trainer.

The ISHA Founders Fund was established to support long-term initiatives in sports heritage by a select group of individuals who cared deeply for the legacy of sport on the world stage. The Fund now supports annual grant initiatives to assist conference attendance and to aid in the implementation of a special project by ISHA member organizations. In order to meet the long-term obligations of this Fund, a Founders’ Fund Committee works to raise money through an annual gift program, silent auction held at the annual conference, and through a reverse raffle.  All revenue raised through these avenues directly impacts ISHA’s ability to support worthy projects that promote sports heritage and fund other initiatives important to all of our member institutions and the entire sports heritage industry. Consider making a donation to this important fund through our website using the button below. Another way to support the fund is to contribute a package for the silent auction held annually during the conference, start planning your contribution today!